In previous articles, I’ve discussed several common reasons your computer might be slowing down.

Naturally, there are a host of uncommon reasons as well. If you’ve looked at all the usual suspects and none of them seem to apply, it might be time to look a little deeper. They’re often not as easily fixed, but they’re definitely worth being aware of.

People seem to fall into two camps: those ready to replace their entire computer because of a software (not hardware) problem, and those who fail to realize hardware can, in fact, break.

Hardware fails in several different ways. Often it’s sudden, immediate, and clear. Other times, however, failure can be gradual and happen in stages. Much like bad sectors on a traditional hard disk,  hardware connected to the computer — everything from networking cables to video display adapters to mice and more — can fail gradually.

And “gradually” can manifest as a perceived slowdown of the computer.

The best thing to do here is to keep an eye on the characteristics of the slowdown. See if it manifests only or most often when doing certain things, and then think about the hardware components involved.

Often, the problems we experience are related to problems inherent in the software installed on our machines.

When a system, driver, or application is identified as having a performance problem, it’s not at all uncommon for that to be treated as a bug that needs to be fixed.

For a variety of reasons — usually related to security, but sometimes impacting speed — it’s important to keep your system up to date. Your computer’s speed can also be impacted as those issues get resolved.

Much like a fragmented hard disk, things can get kind of disorganized in a computer that’s been left on for a long time. It varies dramatically based on how you use the computer and what applications you run, but it can sometimes contribute to performance issues.

Fortunately, the solution is relatively simple: reboot once in a while. It’s good for the machine and resolves any speed issues that might be related.

Since I leave my computers powered on all the time, in the past I’ve had some machines reboot automatically once a night. Other computers — those dedicated to a few tasks — don’t need to reboot as often, so I let them run until there’s some reason to do so. Sometimes a Windows Update forces the issue by requiring a reboot.

This is less of a “problem” and more of an opportunity.

Color depth is the number of different colors each pixel or dot on your computer screen can display. The more colors your video card is able to display, the more memory is required by Windows, as it manages the display, and possibly by applications attempting to display things. This added need for memory can slow things down a bit.

Most computers today come configured for 24- or 32-bit color, and some modern hardware will not support less than that. However, older hardware can often support less color depth, and it’s this older hardware that may benefit from selecting a lower number, such as 16-bit color. This means the computer doesn’t have to deal with as much information simply to maintain what’s on the screen, which can increase your speed.

This is significantly less of a problem than it once was, but I’ll mention it anyway. It’s only an issue for people running Windows prior to Windows 7, with traditional magnetic hard drives (not SSDs). Windows 7 and later versions automatically defrag attached magnetic hard drives weekly, and defragging doesn’t apply to SSDs.

Fragmentation is a performance issue relating to how files are laid out on a hard drive’s surface. I’ve likened it to a book whose pages have been detached and spread out around a home. In order to read the book, you need to locate each page in order, read it, and then find the next page. It’s much easier and faster to have the pages already gathered in order. The same applies to how files are stored on a hard disk.

Fragmentation gets worse over time, as files are deleted and written to the hard disk.

Defragmentation should happen “once in a while”; Windows 7’s default of once a week is fine. More often, you’d probably never notice the difference.

If you’re running a version of Windows prior to Windows 71 and you’ve never defragmented your hard disk, you could be experiencing significant slowdowns as a result. I recommend you do so periodically.

It does have to be said: sometimes the CPU is simply no longer up to the task. What was once a blazingly fast machine is now a slow behemoth.

That may simply be due to the nature of progress.

Modern operating systems and applications are more likely to assume modern (or at least close to modern) hardware and CPU speeds.

There is a very small chance your existing older CPU or motherboard can be replaced with one supporting a higher speed or more powerful chip.

There are a few things people point to as reasons they believe their computer is slowing down that aren’t reasons at all.

Even worse, over the years we’ve seen attempts to capitalize on ignorance of how computers work to sell the digital equivalent of snake oil: solutions to speed up your computer that do nothing at all.

I know lots of people love to blame the registry for performance issues. There are a number of companies that would be happy to sell you a tool to fix these supposed registry problems.

While there are circumstances in which the registry can contribute to performance issues, it’s not anywhere close as common as those folks would lead you to believe.

Most of the time, “cleaning” your registry is a waste of time. Couple that with the very real risk that a registry clean can damage the information stored in the registry and cause more problems than it might solve, it’s just not worth the time or risk.

I’m shocked to see this still floating around. It applied to old versions of Windows, as in Windows 95 and 98. Current versions of Windows do a fine job of managing their own memory, thank you very much. So called “RAM cleaners” or “RAM defragmenters” or other third-party RAM management tools try to second-guess Windows’ own optimizations and either do little or nothing to help, or actually make things slower.

If things are really that bad, a reboot will give you the benefits of starting over with a clean slate.

Related articles: so many reasons your computer is slow 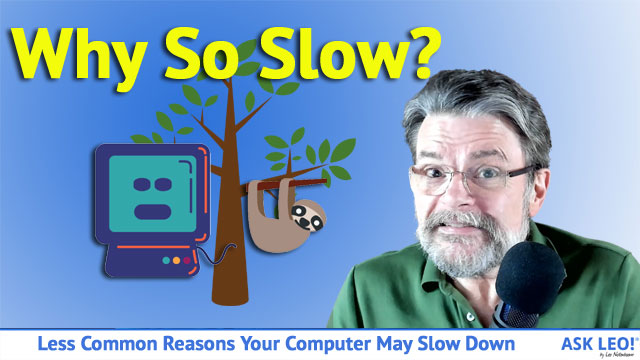 8 comments on “Less Common Reasons Your Computer May Slow Down”