And what you can do about it.

There is one common reason computers slow down over time. The good news is, it's often within your control.

Perhaps the #1 complaint among computer users is that their computer is running too slow, or takes too long to start up, shutdown, or just “do things”.

Obviously, there are many possible reasons, but in my experience, one reason stands out above all others.

The reason your computer is slow

The most common reason a PC might be slow is that there is too much software running — much of it starting automatically when you sign in. Uninstalling software you don’t use, avoiding unnecessary installs, and possibly disabling auto-start entries are the first steps to regaining control.

In my experience, this is the single most common reason computers run slowly.

There are simply too many programs running. There are so many that the program you want to use is competing with all the other programs for system resources, and as a result, it appears to be slow. Sometimes very slow.

Sometimes the program “competing” with all the software running on your machine is Windows itself. The result? Windows is slow.

This is a common scenario in computers that have been in use for “a while”. One reason new computers often feel so much faster — even when running on identical hardware — is that they’ve not had all this additional software installed.

So where does it all come from?

Installing software should be benign. Most of the time, it is.

Installing software shouldn’t cause it to run automatically when you turn on the computer — it should just place the software on your machine in such a way that you can run it when you want to.

Many software packages include components that run automatically when you log in or when Windows starts. Sometimes they’re legitimate components. Dropbox, for example, needs its component running to provide the services for which people use it.

On the other hand, many installs include auto-start components that, at least in most people’s opinions, are completely unnecessary.

Microsoft Office used to install what they called its “quick launch bar”, which ran on login. Its job was to pre-load portions of Office just in case you were going to use them. The reality, though, was that the quick launch bar slowed down startup and other applications. Yes, Office programs appeared to load more quickly, but at a cost.

Those are just examples. There are literally thousands of different things that could affect your computer’s speed by running automatically without your knowledge.

This problem isn’t new. Speed and stability declining over time have plagued computers since their invention. It’s sometimes referred to as “software rot” because the implication is that things just get worse over time.

There’s also a long-standing solution that isn’t as piecemeal as what I’ve discussed so far:

The result is a faster machine simply because you didn’t reinstall all that old stuff you weren’t using.

It’s tempting to have lots of things on your machine “in case” you might need it someday. I do it myself. But over time, particularly if you find you’re not using what you installed some months or even years ago, it’s time to uninstall. It’s also a great time to reconsider whether installing software just in case you need them in the future is enough of a criterion to install additional tools now. 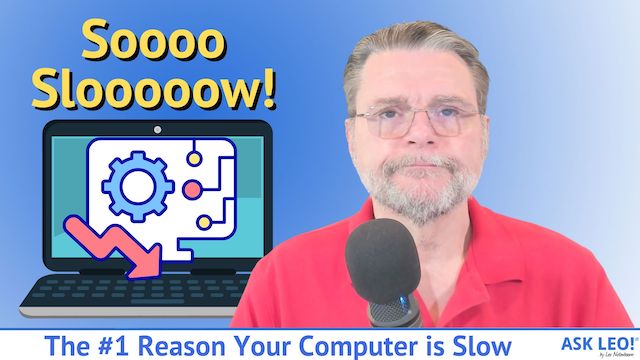 15 comments on “The #1 Reason Your Computer is Slow”