Where to find them and places to avoid.

Device-driver updates can come from several places. I'll review the best sources for driver updates and where else you might need to look.

I downloaded three separate ‘check drivers’ programs. Each program identified seven drivers as being outdated. However, my Device Manager says they’re OK. It’s been very difficult to find the drivers, and if they are outdated I will have to purchase one of the driver programs. Do I need to update these drivers? If so, how do I find the sites to download them?

Finding out whether your device drivers are out of date isn’t simple, and neither is getting the updates.

I’ll review the options and describe what I do.

Driver updates, when needed, are best supplied by Windows Update or directly from the device manufacturer. Other driver-updating utilities should not be trusted. In general, however, drivers need not be updated outside of automated mechanisms already in place unless you’re experiencing a problem you suspect is driver-related.

A quickie refresher: Windows is designed to work with all sorts of hardware, even hardware that might not yet exist.

Windows manages to do this by writing programs to use a fairly generic, albeit complex, interface. When you set up the machine or install new hardware, software is installed to translate those generic instructions into whatever the hardware on the machine requires.

That low-level software that directly controls your hardware device is called a device driver, or just driver for short.1

For example, your video card’s driver knows how to translate generic Windows instructions to “draw a pixel here” or “change the resolution to this” into the specific instructions required by the specific video card in your computer. Different video card, different driver, but Windows programs still do the same things in the same generic way.

That means that every so often, they need updates.

Is a driver out of date?

The real question is “How do I know if there’s a more up-to-date version of the device drivers installed on my machine?”

If the drivers were installed with Windows itself, your answer is very simple: Windows Update will handle any updates for you. That’s all most people need to do.

If your drivers were not installed as part of Windows — and it can be hard to tell — things get more complicated.

There are several third-party tools that may tell you, and I never, ever use them.

I find most to be the classic “we’ll tell you what’s wrong for free, but if you want us to fix it, it’ll cost you money” model. There’s not really anything inherently wrong with that approach, but it certainly rubs me the wrong way. Some are scams or close to it.

So I avoid the entire class of scanning tools falling into that model. I recommend you avoid them as well.

When it comes to drivers, not knowing if a driver is out of date doesn’t really bother me much.

I look for driver updates only when I’m trying to track down a problem with a specific driver or device.

In other words, if things are working, I leave well enough alone.

I realize this is at odds with a message I and others harp on: “keep your system as up to date as possible.” My rationale is this:

Where to find drivers

As I said, I don’t recommend paying driver download utilities to do the work for you. Some may be legitimate and work, but in my opinion, it’s too risky for a couple of reasons:

If you’re going to go somewhere other than Windows Update for drivers, I recommend only one destination: the hardware manufacturer.

Start with the computer manufacturer, especially if yours is a name-brand computer. They often provide all the drivers on their support site. Others will point you to the component manufacturer’s site, perhaps even directly to the page you need.

If the computer manufacturer doesn’t help with either direct downloads or pointing to the right component manufacturer, then this gets old very fast, which is another reason I only recommend doing it if you’re actually chasing down a problem you’re having with a specific piece of hardware.

If that’s not the case, then the best place to get driver updates is simple: nowhere at all. 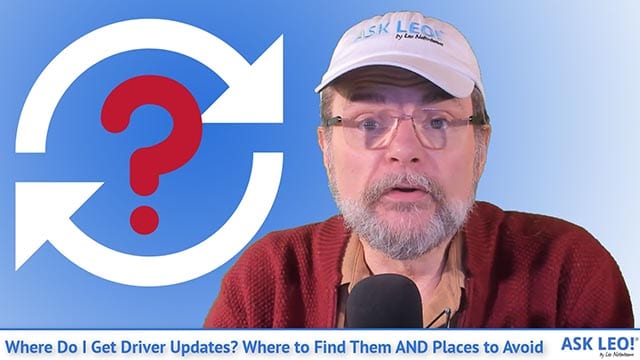 1: You may also hear the terms “hardware driver” or even “software driver”.

15 comments on “Where Do I Get Driver Updates?”