Every time I buy a new computer, I end up doing more with it.

For example, I now regularly run virtual machines, record and edit video, and run applications such as Adobe Photoshop. Each of these things have two important characteristics:

I’ve been asking my computer to do more and more — and I suspect you have, too.

Is it any wonder it seems slower?

Upgrading a machine can only get you so much. Before replacing a machine with a newer, more powerful one, it’s worth examining our usage, and seeing if our expectations have exceeded the machine’s capabilities. Perhaps changing what we do or how we do it can lengthen its usable lifespan.

Upgrades only go so far

Most of my machines have been upgraded — repeatedly, and in various ways — and yet over time, they still slowed down.

The slowdown wasn’t due to anything inherently wrong with the machines or the software. I simply  continued to push each to its limits by virtue of the things I asked it to do.

And there are limits. If I asked one to do too much, such as running too many virtual machines at a time, the machine bogged down. One of the most common symptoms is increased virtual memory use. Since disks are slower than RAM, my computer slowed down.

So I stopped doing that. Once a machine is maxed out in terms of hardware, I choose not to do some things I would otherwise.

Of course, if that goes on long enough, I replace the machine with something more powerful. That, too, is a choice.

It’s easy to ask too much

When you’ve had a computer for a length of time, it’s not uncommon to be in a similar situation, often without realizing it.

You don’t really have to be running new applications to be “doing too much”. It can be as simple as your own habits slowly changing over time. For example, how many tabs do you typically have open in your browser at the same time? I wager it’s more than you usually had open five years ago.

One of the things that has changed dramatically over time is the amount of time we spend online and the number of different online services we use. As a result, we are multi-tasking more than ever, and we’re doing it all within our browser. Each open tab takes more of your computer’s resources.

Thus your own change in behavior — keeping more tabs open in your browser, in this example — has the side effect of demanding more from your computer than you may have in the past.

I use browser tabs simply as an example. It’s very possible that, like me, you’re now running more (and/or more powerful) applications, or using existing applications in ways that use more resources.

So, what do you do about it all?

Eventually, as I did, you’ll probably end up getting a newer, faster, and more capable machine. But by being aware of and managing your own use of your system, you can delay that necessity as long as is pragmatically possible. 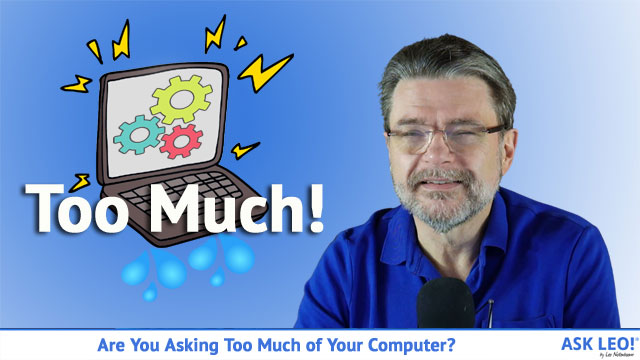 20 comments on “Are You Asking Too Much of Your Computer?”