Not all computers can run Windows 10.

It would be good to know if your computer meets Windows 10 minimum requirements before installation. I have a recommendation on how to proceed.
Applies to Windows: 10
Can my computer run Windows 10?

That’s a very good question. It’d be great to know if your computer can run Windows 10 before installing, right?

Microsoft provides Windows 10 minimum requirements to determine whether or not your computer can run it. The problem is, those criteria don’t always seem to be enough, or are easily misinterpreted. Even after supposedly meeting the requirements, some upgraded machines run into trouble.

I’ll review the issues I’ve heard about and make recommendations as to what you should do.

Windows 10 works for most

That can lead to a misconception about just how stable Windows 10 is or isn’t.

My sense is that Windows 10, either in upgrades or clean installs, works, and works well, for most1 people. But that doesn’t help if you’re one of the folks who have trouble.

Being the bare minimum, those requirements might get you a system that barely works.

Instead, I recommend at least:

Even on older machines, that should result in something closer to acceptable performance. Obviously, more is better in all categories.

And yet, even on machines that meet or exceed my recommendations, folks can have difficulties.

By far the most common area of failure appears to be related to devices external to your computer: printers, scanners, cameras, some audio devices, and more.

Your computer may support Windows 10, but your printer? Not so much. In cases like that, it doesn’t matter that your computer meets Windows 10 minimum requirements. If the printer doesn’t work and the manufacturer hasn’t provided updated drivers, you’re out of luck.

A newer computer and an older printer appears to be a recipe for failure. If you’re using even more esoteric devices, the risk you’ll run into a problem increases, even if Windows 10 technically works on your machine.

Less common but still a problem are machines meeting the minimum requirements on paper, but when Windows 10 is installed, something doesn’t work.

I’ve heard of scenarios where hardware meets the minimum requirements, but the drivers don’t fully support Windows 10. I’ve had reports of random failures with various apparently incompatible pieces of hardware — perhaps most commonly for monitors.

Perhaps the most frustrating situation is when the tools that test your computer for Windows 10 compatibility — including the upgrade assistant and the Windows 10 installer itself — get it wrong.

I’ve seen it both ways:

That makes it difficult, if not impossible, to rely on the compatibility test to accurately test your machine’s compatibility.

If your machine works, don’t upgrade. Particularly if you’re running Windows 7 or 8 and are happy with how things are going, in my opinion, you can continue to use them as long as you use common sense.

At a minimum, you don’t need to be in a rush. You can even still get Windows 10 for free.

Sometimes a clean install is more successful. Here’s how: How Do I Reformat and Reinstall Windows?

Option #2: Upgrade, but with a safety net

If you really want to upgrade, or you have a reason to upgrade, there is a perfectly safe way to do it. Unfortunately, not many people seem to use it.

Seriously, it really is that simple. It’s one of the reasons I talk so much about backup programs, specifically image backups. An image backup is like freezing your entire computer in time, so you can always go back to the way it was before the upgrade.3

To be completely practical, it appears that the only way to be 100% certain Windows 10 will or will not work on your machine is to try it out and revert if it doesn’t.

An image backup is how you do that safely.

A 10-year-old computer can probably run Windows 10 if it meets the minimum requirements outlined by Microsoft. Besides minimum RAM and disk requirements, some older processors may not have all the features required for the operating system to run. The best approach is to try it. Take a full system image backup of your older machine, and then attempt to install or upgrade to Windows 10. If it fails, you can always revert to your backup image.

4GB of RAM is my recommended minimum for running Windows smoothly. You can run it with less, but you’re likely to suffer performance issues. Depending on what software you plan to run on the machine, it’s possible you may need more, but 4GB should provide enough room for Windows 10 and most common computer tasks, such as web browsing, office applications, and email.

It’s possible Windows 10 can run smoothly with only 2GB of RAM, but this is highly dependent on exactly how you use the computer. If all you do is browse the web, then 2GB could be quite sufficient. As soon as you attempt to do more — particularly more things simultaneously — 2GB will quickly impact the ability of the computer to operate as quickly as you might prefer.

Which Windows 10 version is best for an old laptop?

The best version, or edition, of Windows 10 for any computer, new or old, for home, personal, or small business use is Windows 10 Pro. The system requirements for both Home and Pro are the same, and the practical differences in their resource usage is small. The best version of Windows 10 is the most recent, whatever that might be, for both security and stability. 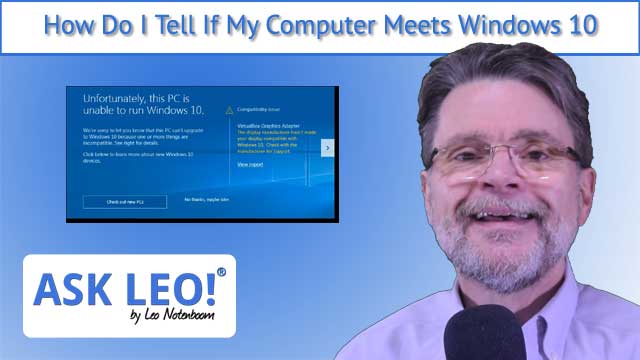 1: By works, I mean from a technical perspective. Whether you’re happy with the user interface or concerned about potential privacy issues is less about technology and more about personal taste and policies.

2: My virtual machines all originally refused to upgrade because of a claimed incompatibility with the video driver. A clean install worked just fine every time.

3: Or malware, or hardware failure, or just about anything at all.

15 comments on “How Do I Tell If My Computer Meets Windows 10 Minimum Requirements?”