A pixel is a single point of light or color in an image or on a digital display device, and the smallest point that can be individually set to a specific color or brightness.

Pixel is actually short for “picture element”. In digital display technology – whether that’s on screen or digitally printed on paper – anything displayed is comprised of nothing more than dots – the pixels – that are individually set to specific colors.

While most commonly thought of with respect to photographs, everything that is displayed digitally is simply a collection of pixels. 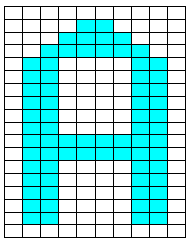 The letter A above is represented in a 10-pixel-wide x 18-pixel-high grid, containing a total of 180 pixels.

Digital camera resolution is also spoken of in mega-pixels. The term resolution is used because the more pixels that can be used to capture or encode the same physical area, the more clarity the resulting image will have to the human eye when rendered.

pixel (Wikipedia)
This article is about the picture element. For other uses, including for the plural form "pixels", see Pixel (disambiguation).

This example shows an image with a portion greatly enlarged so that individual pixels, rendered as small squares, can easily be seen. Each pixel is a sample of an original image; more samples typically provide more accurate representations of the original. The intensity of each pixel is variable. In color imaging systems, a color is typically represented by three or four component intensities such as red, green, and blue, or cyan, magenta, yellow, and black.

In some contexts (such as descriptions of camera sensors), pixel refers to a single scalar element of a multi-component representation (called a photosite in the camera sensor context, although sensel is sometimes used), while in yet other contexts it may refer to the set of component intensities for a spatial position.