When you think about it, the security software on your computer, and specifically the anti-malware tools, have to do a lot of work.

So much so that the work might impact your computer’s speed — perhaps for a while, perhaps constantly.

Security software can slow down your computer, it’s true. You can select tools with a reputation for minimizing their impact, as well as choosing times and options that minimize the impact when you’re trying to get work done. The role of security software is important, and taking the time to make sure it doesn’t get in your way is too.

When we ask our security software to perform a full scan, it needs to read and examine the contents of every single file on our computer. Even when restricted to those file types that most commonly contain malware, that adds up to thousands and thousands of files.

On top of that, we’re asking the anti-malware tool to check each file against its entire database of known malware. That could include hundreds of thousands of different characteristics or patterns.

That’s a bunch of work. Naturally, exactly how much impact the scans have on performance vary based on which anti-malware tool you’re running and how fast your machine is. In an ideal scenario, the scan operates without notice, but reality is somewhat different.

Slow for “a while”

The most common scenario I hear about is a computer that’s slow for “a while” after it’s first turned on or logged into.

This is often the result of security software performing a scan (as requested) immediately upon booting. Once the scan is complete, the computer returns to normal.

And, of course, some tools are better at minimizing their impact than others.

There are a few options to explore if you find that your security software is impacting your computer’s performance when you’d rather it didn’t.

Security software is important. I’d even go so far as to say that it’s a critically important part of keeping you safe. That safety, though, comes at a cost: the tool needs the time and resources to do the job we ask it to do. By picking and choosing the right tool and the parameters under which it runs, we can minimize the impact to the point of it not being an issue at all. 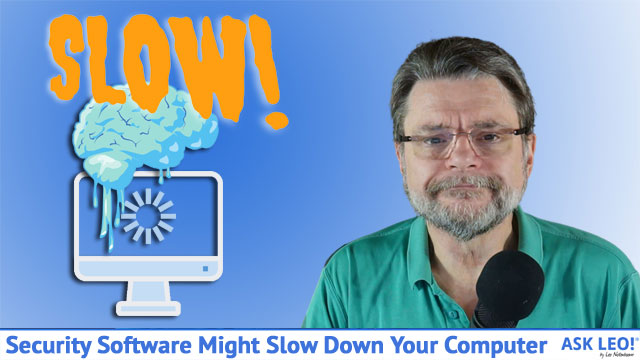 5 comments on “Yes, Your Security Software Might Slow Down Your Computer – What to Do About It”