It’s no surprise that malware can impact your computer’s speed. It’s one of the conclusions people often jump to when their computer slows down, and it’s not uncommon for them to be quite right.

Interestingly enough, malware can impact speed before it arrives, while it’s present, and even after it’s been removed.

Running too much (or poor-quality) security software commonly impacts performance without any malware being present. Of course, malware on your machine can slow it down, as can its leftovers after having been removed. The best approach it to stay safe and avoid malware in the first place.

Malware’s impact before it arrives

One of the most common causes of computer slow-downs is trying to run too much software.

One common cause of running too much software? Fear of malware. Or, rather, installing too much (or poor quality) security software on your machine to avoid it.

Having too many different security solutions installed is a fast path to problems, and one of those problems is speed (or the lack thereof). The various security software packages come into conflict or duplicate efforts to the point where your computer is spending so much time scanning and trying to stay safe that it can do little else.

Pick a solution and stick with it. I have recommendations, but regardless of what you choose, make sure it has a good reputation and meets your specific needs.

Don’t randomly add more tools. If you want to replace the solution you’ve chosen, uninstall it before installing its replacement to avoid conflicts1.

And of course, ignore the advertisements claiming amazing results or one tool that does it all. There are good solutions out there, but the poor ones are advertised right alongside them. Do your research.

Malware on your machine can absolutely slow it down. It can do a lot more, of course, but when it’s running correctly (by the malware author’s definition of “correct”), malware’s initial (and sometimes only) symptom can be a machine that has begun to slow down. Ransomware gets the most press these days; it systematically encrypts files, taking computer resources to do so.

This is also very much related to the issue of too much software: malware is additional software running in the background on your machine. It’s not always designed to behave nicely, and as a result, it can have a negative impact on performance.

There’s no magic bullet here. The solution is to avoid malware in the first place and remove it when you encounter it.

The impact of malware removal

Even after successful malware removal, its memory can linger in the form of poor performance.

The problem is, not all security software does a good job of both removing the malware and returning your system to the state it was in before the malware showed up.

In fact, even with the best anti-malware tools, there may not be a way to return to a pre-infected state. The now-departed malware could have affected other things, like system settings or other applications, such that the net result is a slower system even with the malware no longer present.

When that happens, the only pragmatic recourse is to either revert to a backup image taken prior to the malware’s arrival, or reinstall Windows so it can reset everything back to a known good state.

Of course, the best solution, as always, is not to allow malware on your machine to begin with.

Keeping your machine safe is something we hear often. I call it the “litany of safety”.

Staying safe from malware and recovering from malware infections is a huge topic, but those are the basics. You can read more about them here, in what I consider my single most important article: Internet Safety: 7 Steps to Keeping Your Computer Safe on the Internet. 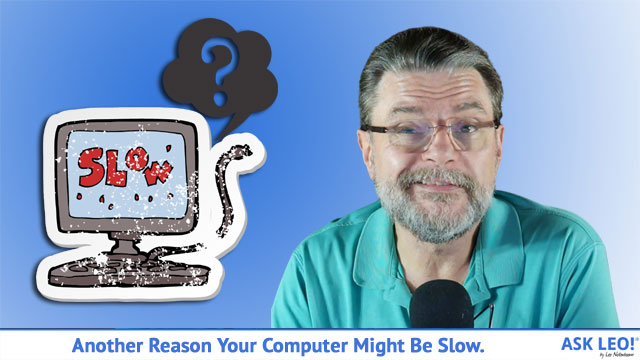 1: Except for Windows Security (aka Windows Defender) — it will simply step aside if you install a different solution.

3 comments on “Another Reason Your Computer Might Be Slow: Prevention, Presence, or Removal of Malware”