If things seem slow, it’s important to realize that it might not be your computer at all. It might be your slow internet connection.

You might have the fastest computer in the world, but it’s still limited by the speed of your internet connection. And if you have multiple devices sharing that connection, things get even worse.

We’re doing more and more online than ever before. In many ways, our computers are transforming from devices on which we do local computing (running our programs, creating documents and so on) to devices providing an interface to the larger world of the internet.

The problem, of course, is that the internet comes to us through a single point: the connection as provided by our ISP.

Things quickly get confusing, however.

When a YouTube video won’t play smoothly, is it the connection or the computer? It could be either.

When a website fails to come up quickly, is it the website itself, the connection, or the computer? It could be any of those things.

If your social media pages fail to update quickly, is it the service, the connection, or the computer? Once again, any of the above.

If just a single website is slow, then it’s probably the not the connection, but either the website itself or your computer.

On the other hand, if most websites feel slow, then the speed of your internet connection may be to blame.

If things feel faster on a different computer that shares your internet connection, then perhaps your computer is to blame. If things are as pokey on one machine or another, that points to the connection.

Of late, another problem has arisen: competition.

As I type this, I count no fewer than 32 devices sharing my single internet connection. While you may not have nearly as many as I do, it’s likely more than you think.

Be it two or 32, all those devices are competing for the available bandwidth of your connection. While most might be idle a majority of the time, if one or more of them begin downloading a large update, or if they start streaming a video, it will negatively impact the apparent speed of your connection for all other devices.

There are a lot of tips out there for speeding up your Wi-Fi, and I often see advertisements from one ISP or another touting their “fastest Wi-Fi” as a feature.

Wi-Fi is not what I pay my ISP for. I pay them for the wire that delivers the internet to my home. If that’s slow or overloaded, it doesn’t matter how fast my Wi-Fi is.

Unfortunately, there’s almost nothing you can do to your computer (or your Wi-Fi) to speed up your internet connection appreciably. Yes, I know, there are utilities that claim to be able to tweak settings to do so, but they rarely have an impact, and when they do, it’s usually something you’d never notice.

You can’t make it faster, but…

OK, you can make it faster, but…

Actually, there is one way to make your internet connection faster. If you’ve done everything I’ve suggested above and you still feel the need for more speed, there’s one alternative.

If, of course, it’s available. If not, and if you have alternatives, see if other ISPs serving your area would be able to give you something better.

Yes, it does mean throwing more money at the problem, but all things considered, the way we’ve come to rely on the internet and connectivity, it may be a small price to pay.

But the most important thing to realize is that a slow internet connection can look like a slow computer, when in fact the computer isn’t at fault at all. 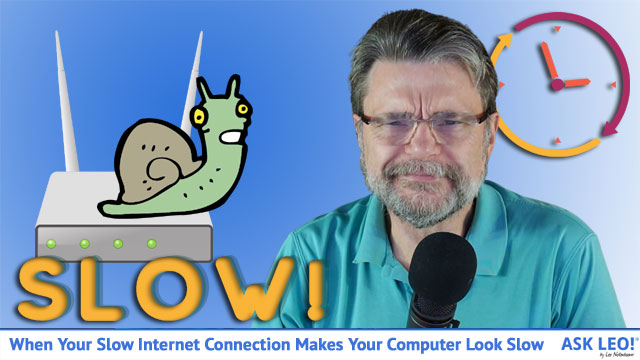