When I talk about computer clutter, I’m not talking about a cluttered desktop (a personal pet peeve of mine) but rather clutter left over from applications not cleaning up properly after themselves, or applications that can’t clean up for various reasons.

If left un-dealt with, this type of clutter can fill up your hard disk to a point where other disk operations are impacted.

In other words, it can slow your machine down.

Files that accumulate on your computer — computer clutter — can impact performance. Periodically clear your browser cache, run the disk clean-up utility, and consider running a third-party tool like CCleaner. Above all, keep an eye on your disk usage as an indication of potential problems.

The type of computer clutter I’m talking about includes temporary files, leftover installation files, web-browser caches, and more. There’s an entire class of “stuff” that can accumulate on your machine.

One of the best examples is the web-browser cache. In order to speed up your web-browsing experience, all modern browsers download the components of a webpage to what’s called a “cache”, or holding area. That way, when you browse to another page that requires the same components, they don’t need to be downloaded again since they’re already in the cache.

A good example is the Ask Leo! logo you probably see above, and here:

Regardless of how many pages you view, or the fact that it appears twice on this page, the image need be downloaded only once — the first time your browser encounters it.

The problem is the browser cache can develop issues over time. For an assortment of reasons, browsers can get “confused” about what’s in the cache. One common debugging technique — often the first suggestion when troubleshooting a web-based problem — is to empty the browser cache. This both frees up disk space and forces the browser to rebuild the cache from scratch.

Another common source of leftover files and more computer clutter is what are called “temporary” files. These are files created by running programs — often setup programs — that are left behind when the program has completed its work.

Sometimes it’s just sloppy programming. Sometimes something else has interfered with the delete. And sometimes there’s a logical reason that such a file might be intentionally left behind. Log files that might need to be examined after the fact are one good example of the latter scenario.

It’s generally safe to remove all temporary files, but it isn’t something that is done automatically for you. You might need that log file, after all.

Leftovers — intentional, but no longer needed

One of the biggest space hogs many people are surprised to encounter on their systems is a previously installed version of Windows.

Upgrade to Windows 10, for example, and you may find your old Windows 7 in a folder called “Windows.old”.

Another leftover? All the old versions of files replaced by Windows updates. They’re not really computer clutter, per se. They’re left around “just in case” you need to revert to them, but after some time they’re no longer needed. How long is “some time”? Well, it depends, and that’s why they don’t magically disappear after a while — there’s no way for an automated process to know with certainty that it’s safe to delete them.

Particularly with today’s SSDs (solid state drives), the impact of having a lot of leftover files stored on your computer isn’t what it once was — but it can still add up. Particularly as your hard disk nears being completely full, all that clutter — be it temporary files, leftovers, or whatnot — can have an impact on your computer’s speed and even its stability.

While not high on the priority list, it is something I recommend you pay attention to periodically.

The good news is that most of it is easy to deal with.

Dealing with a cluttered disk

There are relatively simple steps and tools to clean up much of the clutter that normal usage of any computer can leave behind.

I recommend you run Windows Disk Cleanup utility every few months. It includes tools to clean up many of the most common and easily overlooked space hogs that are safe to remove.

I recommend you also clear your browser’s cache periodically. Normally this is something you’ll do periodically anyway, I suspect, as you track down various browser-related problems, but even if you don’t have a specific reason, I still recommend it. “Starting over”1 allows your browser to manage its disk usage better, and maybe even speed up a little.

Consider using a third-party tool like CCleaner for additional cleaning. Windows own disk clean-up utility only cleans things Windows knows about. CCleaner, and other utilities like it, cleans up third-party leftovers and more.2 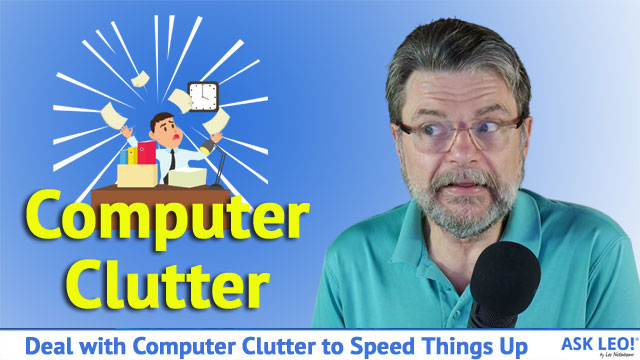 1: “Starting over” is a common theme in computing. Be it “reboot” or “reformat and reinstall”, starting over is a common, safe approach to problem prevention and resolution.

2: I mention CCleaner with some reluctance, as of late it’s a common source of PUPs. Install with caution.

8 comments on “Deal with Computer Clutter to Speed Things Up”