“Software rot” is both very real, and one of the most difficult things to explain and understand.

While it’s certainly become better in recent years, it remains something to consider when diagnosing a system experiencing unexpected slowdowns. While there are ways to reduce its impact, fixing it can be a major effort.

Software rot is the slow degradation of your computer’s performance for no apparent reason. It’s most commonly caused by installing and uninstalling software, but can also be the result of software updates increasing resource requirements. Avoid software rot by installing additional software only when truly needed. Recover from software rot by reinstalling your system or reverting to a backup image.

The concept behind software rot is very simple: for seemingly inexplicable reasons, systems become slower and more unstable over time, even though you’ve done nothing you would think should cause it.

I say “seemingly inexplicable” because understanding exactly what changes are occurring, even though you believe you’ve done nothing, and exactly why those changes are having the effect they seem to have is almost impossible. However the effect you and I experience is very, very real.

To be clear, software is not like some kind of fresh fruit that you have to keep in a refrigerator to keep it from degrading. Software, untouched, should remain exactly as it is as long as the computer it’s installed on keeps running.

And yet, it feels like it does decay over time. It seems to slowly “rot”, if you will.

The key is that word I used above: “untouched”. We’re doing things with and to our computers all the time.1

This might be the number one cause of software rot over time. It particularly affects those who love to try things out by installing them on their computers, and then uninstalling (or perhaps not) after some time.

The issue is a complex one, but boils down to the fact that modern computer programs are incredibly complex. As a result, installing an application is a complex operation affecting many different parts of the computer beyond just the application itself.

Many people tend to focus on the Windows registry as the root of this evil. While poor registry management can be part of the problem, there are frequently much larger issues at play.

Applications try, as much as possible, to avoid duplicating functionality and avoid re-inventing the wheel by sharing code, or by using libraries of code that are designed to be shared among multiple applications. For example:

You save disk space, and both programs A and B save development cost since they both didn’t need to each independently invent library Y.

What happens when you uninstall program A? Should it:

(I have to call out the difference between “is using” and “might be using” since there is no reliable technique to keep track of who’s using what.)

No matter what decision is made, it can be viewed as either right or wrong.

The situation gets even more complex when applications end up relying on different versions of the same libraries. For example:

If version 2.14 of the library is present because program A was installed first, what should program B do?

Or if program B was installed first, what should program A’s installation do?

And what, if anything, should happen with either program A or B is uninstalled?

The kicker is that all of these answers are absolutely right, and absolutely wrong, depending on the programs involved, the libraries involved, and a multitude of other things.

Most often this is why you’ll often see multiple versions of libraries, like the Visual C++ Runtime, installed in Windows. Apparently the approach taken is to install the version you need if it’s not already there, and then never uninstall it in case another program is using it.

The net result of all this confusion is applications break, misbehave or simply behave poorly because the assumptions that they once made about what resources to use and how to use them are challenged as applications are installed and uninstalled.

One of the things many folks point at are software updates; specifically Windows Update. We keep hearing news stories of systems that have problems after an update.

Yes, I would say this is a form of software rot. Bad updates can cause problems. Not, however, even completely benign updates can impact your system’s performance by pushing resource requirements higher, perhaps even beyond your system’s ability to cope.

Nonetheless, continuing to regularly take updates is important. You are more likely to be impacted by an unpatched vulnerability if you don’t take updates than you are by some kind of destabilization if you do.

I know it’s nice to try out software from time to time, but if this is something you do frequently it’s best to use a sacrificial machine, or better , a virtual machine, you can rebuild from scratch or restore from a backup image after your experimentation.

Take a backup before and restore it after a software trial. This guarantees changes made by the software are removed from your machine. Take the backup before even if you don’t plan to restore it, just in case something goes wrong.

If you suspect software rot as the cause of your machine’s  performance issues and instability there are only two approaches to recovery:

While the situation has improved in recent years, software rot remains enough of an issue that individuals such as myself whose job it is to try out software of various sorts will simply plan on a complete reinstall of the software on their computer (by restoring a backup or performing an actual reinstall) every few years. 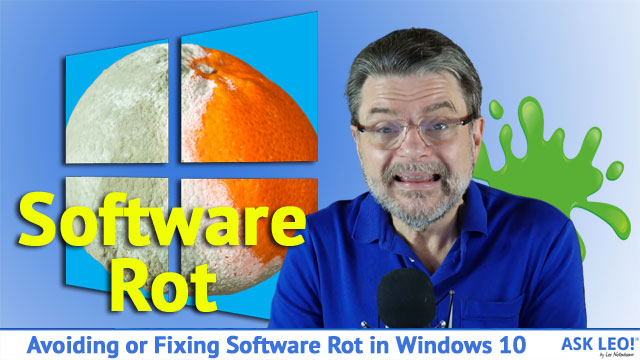 1: I was really tempted to bring up an analogy that some things are the equivalent of picking up food with clean(ish) hands versus dirty and disgusting hands, and that some of the thing we do to and with our computers have various levels of analogous cleanliness. I’m afraid people would take me literally so to be clear: the actual state or cleanliness of your hands has nothing to do with software rot. But wash your hands anyway, it’s just good personal hygiene.

8 comments on “Avoiding or Fixing Software Rot in Windows 10”