“Defragging” is short for de-fragmenting. It’s a process run on most hard drives to make accessing the files on that disk faster. In years past, it’s something you would do periodically, as files on the disk became more and more fragmented over time (hence, the term “defragmenting”).

So, what does it mean for a disk to be fragmented? Why does it get worse over time?

And is defragging something you need to worry about?

To you and me, a file on your disk is a single thing. You open it, you work on it, you save it. It’s a single entity. We might compare it to, say, a book.

To your computer, however, a file is a lot more like a bunch of pages in a book that it has to keep track of individually.

Imagine the pages of your book are randomly scattered throughout your house. You have a list of where each page is, so when you want to read your book, you go find page 1, then consult the list for page 2’s location and go find it, look up page 3, go find it, and so on and so on. In order to read your book in order, you’re racing around the house because the pages are scattered all over.

That’s a fragmented file. The sectors1 that make up the file are scattered all over the disk. The result is that when you access the file, Windows has to race all over the disk to retrieve the whole thing. That takes time.

Defragmentation is nothing more than arranging all the pages/sectors together in order so they’re close to each other. In a perfectly defragmented disk, the sectors of each file would be in an orderly sequence one right after the other, just like the pages in a book.

Now, unlike the pages of a book strewn about your home, disk sectors are a little more limited in how they can be laid out. In order for the sectors of one file to be arranged in order, other files or fragments of files may have to be moved out of the way to make room.

In fact, that’s what a defragmenting tool spends most of its time doing: moving files around on the disk to make room so other files can be laid out in order.

It’s also one of the things that differentiates one disk defragmenting tool from another: some are simply better or more efficient at moving things around as little as possible, so as to be done as quickly as possible with a result that’s as acceptable as possible.

Fragmentation happens because files on the disk are constantly changing. They are created or deleted; they grow or shrink in size. And it all happens in a fairly random order.

For purposes of example, let’s say we have a very tiny disk that has exactly 12 sectors and no more.

As you can see, that leaves a “hole” of two empty sectors between the remaining Files 1 and 3.

It’s important to note that this all works just fine. Fragmented files are handled transparently by the operating system and the file system. The various fragments are all kept track of and located as needed. It’s just that in our silly little example above, if we want to read File 4 from end-to-end, we need to spend a little time “skipping over” File 3. If File 4 were in one contiguous set of sectors, the process would be a tiny bit faster.

Making that happen is what defragging is all about.2 Defragging would potentially move File 3 over two sectors, and move File 4’s (b) fragment to be adjacent to the (a) fragment, resulting in File 4 being contiguous.

But do I need to defrag?

In the past, the answer was a pretty clear “yes”, but things have changed.

So if either of those things are true — you have SSDs or you run Windows 7 or later — you need do nothing.

If, however, you’re running something earlier than Windows 7 or you suspect that the once-a-week schedule might not be enough, and you have a traditional hard drive, then manual defragmenting might be worth a shot.

That opens up “Optimize Drives”, also known as the Windows Disk Defragmenter:

Using this tool, you can analyze the fragmentation of a drive or defragment the drive.

There are also third-party defragmenting tools that can be used. One example is Piriform’s Defraggler. Windows’ own tool is typically more than sufficient, but outside tools may provide more information or be able to perform a faster or more thorough defragmentation. 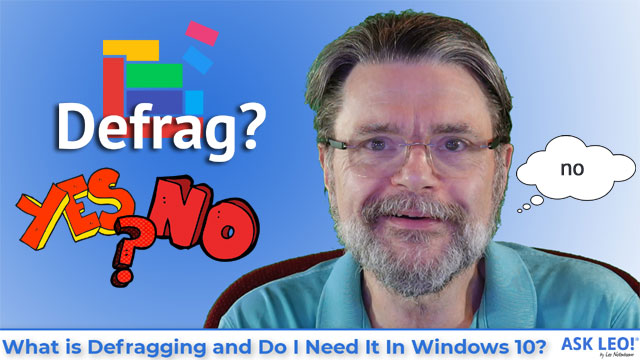 1: Technically, the information is grouped in “clusters” of sectors rather than individual sectors. But for purposes of this discussion, the difference is immaterial.

2: It’s worth noting that, because of the small amount of free space left in our example, defragging may or may not be possible, depending on the tool used. While theoretically it should be possible by shuffling individual sectors around, most tools require enough free space to hold at least the largest file being defragmented.

3: Although I do recall reading an analysis that seemed to indicate that defragging an SSD did improve performance slightly. My recommendation remains don’t do it. To me, the risk of wearing it out sooner is too great compared with the small performance improvement that might (or might not) be had.

59 comments on “What is Defragging and Do I Need It In Windows 10? What It Is, Why It Is, and What, if Anything, You Need Do”