…and give us unreasonable expectations.

Please don't base your understanding of technology on what you see in TV and movies.

Anyone who has an area of expertise will, when watching television shows or movies involving that expertise, occasionally yell at the screen.

I’m no exception. I’ve certainly said “THAT’S NOT HOW IT WORKS!” at some misrepresentation of technology woven into the latest TV or movie crime drama. (My wife is equally likely to shake her head at medical shows.)

Part of it is me being pedantic — I get that. But given what I do for a living, I see how it leads to something more harmful: unrealistic expectations.

Unrealistic expectations based on TV and movies

Television and movie dramas are by definition fiction. That means they take liberty with the technology they portray, often having it do things that are unrealistic or improbably fast. Unfortunately, many viewers take these as examples of what’s actually possible rather than the entertainment and storytelling it is. Unless you know otherwise, it’s best to approach all technology use in fiction as being fictional itself.

I mean contemporary drama, not sci-fi

This isn’t about science fiction. By definition, all rules are suspended in science fiction, and technology can be defined to work however the author wants it to. While the success or failure of the show might hinge somewhat on how believably technology is displayed, it doesn’t have to live within our current restrictions. That’s kind of the point of sci-fi.

I’m talking about fictional shows set in roughly the present day. Most common examples are police and related dramas. They tell a story set in the current time using current technology.

Technology that they often get so very, very wrong.

Let’s look at some examples and where some might have a tendril of accuracy hidden in all the misinformation.

It’s an all-too-familiar plot point. The cops capture an image of the bad guy’s vehicle on surveillance video, but the video’s too blurry, or out of focus, or too far away for the license plate to be legible. The lead investigator asks the computer tech to “enhance” the image. The tech types some random keystrokes, and the image gets better, but not quite enough. So they repeat the process. I think I’ve seen it repeated up to three times before the plate in question becomes visible.

This might be my biggest pet peeve. It doesn’t work like that, and it leads people to expect more out of image technology than can possibly be achieved.

Interestingly enough, there are enhancement technologies available. Artificial intelligence can do a pretty decent job of increasing resolution and sharpness somewhat in certain situations. Essentially, the AI says, “Oh, this looks like hair, I know what hair looks like, so I’ll make it look like better hair,” or something similar, and at a much more granular level.

We’ve also heard that blurring text may not be enough to prevent its discovery. The blurred image may contain enough information to reverse the effect and recover the text underneath. But that blurred image started with all the information necessary before it was blurred. Just because we can’t visually interpret it doesn’t mean software can’t.

But an out of focus or too-distant photograph never had that information to begin with. No amount of yelling “Enhance it!” at your subordinates will make it otherwise.

It seems that almost every modern police procedural includes this trope: somehow they get the bad guy’s IP address, and within a few minutes they bust into his or her home and arrest them.

Do I need say it? It doesn’t work like that.

Under the right conditions, an IP address can be used to locate a home. And indeed, police or law enforcement are the only organizations able to make it happen. But here’s the catch: it requires a level of coordination, permission, and paperwork that simply can’t happen in anything close to real time.

So, yes, while it’s technically accurate, the ease and speed at which this seems to happen is dramatically off-base. Unfortunately, this often leads to unwarranted expectations when people are being harassed online or otherwise wanting to determine who is at a particular IP address for themselves.

Another common scenario is when the authorities get hold of the bad guy’s hard drive or thumb drive, which turns out to be encrypted. No problem! The drive is handed over to the special person/division/hacker who’s able to crack the encryption and expose the contents.

Here it comes again: it doesn’t work like that.

Good encryption is exactly that: good. There’s no magical expertise on the decrypting side that would make it any different. The only way something properly encrypted would be decrypted in a reasonable amount of time is if the bad guy left the decryption key lying around or used terrible encryption. Otherwise, the police are looking at months or years of decryption effort. That’s not something that’ll fly in a one-hour television show.

Brute-forcing passwords is a very real thing. It’s nothing more than trying every possible password until you find the one that works. When done offline, eight-character passwords can be brute-forced in minutes. It’s one of the reasons security experts continue to remind us that length is perhaps the most important password characteristic.

But cracking a password is an all-or-nothing thing. You don’t get close or incremental results.

You know what I’m going to say, right? It doesn’t work like that.

Password-cracking is significantly more difficult than TV and movies would have you believe.

As long as your password is long enough, that is.

This doesn’t really set unrealistic expectations, but I notice it nonetheless.

Watch the actors when they’re typing. Many do nothing more than wave their fingers over the keyboard. The “keystrokes” and clicking sounds are added later. (If they were trying to be authentic, they’d be typing the backspace key a lot more as well.)

Semi-related: I’ve never seen — or rather heard — a display that makes character-by-character noises as information is displayed. It doesn’t work like that.

If you’re hearing something as information scrolls by on a screen, it’s another sign that what you’re seeing isn’t accurate.

While you might not notice, and this doesn’t really impact your expectations, this is most definitely a pet peeve that gets me every time.

Aside from non-fiction documentaries, shows that get technology right are few and far between.

One classic that does is the TV series Mr. Robot. While I found it a very interesting and entertaining show, I was impressed by how they tried to portray technology accurately at the screens-and-keyboard level. Some major plot points perhaps sometimes pushed the limit, but when people were interacting with technology directly, it was all relatively believable.

Of course, it should be a given that our governments probably have access to the most advanced technology. It’s almost a meme that the US’s National Security Agency (NSA) has supposed superpowers when it comes to spying or collecting information.

Nonetheless, there are limits. Good encryption, for example, is good encryption no matter who you are, NSA or not. Besides, there are better approaches if you have more time and more reach than a two-hour movie would allow. Spyware-targeting an individual’s machine, for example, to capture information before it’s encrypted is much, much easier than brute-force decrypting something after the fact.

Conspiracy theorists who believe that government agencies are hooked in so deeply that nothing is safe will call me naïve. Even if that were true, the government wouldn’t allow that to be exposed on a weekly crime drama.

What might be more plausible is that criminals aren’t necessarily the brightest, and law enforcement might easily capitalize on the mistakes they make, like finding a critical password written on a sticky note in the criminal’s lair.

Remember that TV shows and movies are fiction. Some do a better job of adhering to reality than others, but the bottom line is that as long as their show remains successful, they don’t have to. Technology, along with many other disciplines, is ripe for skimping on accuracy, particularly if getting it right would be time-consuming, costly, or would distract from the story being told.

Don’t base your understanding of technology on TV and movies.

Instead, seek out sources you know aren’t fiction. Hopefully sources like Ask Leo!. 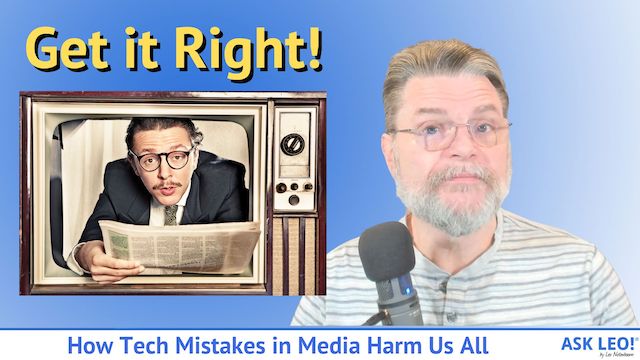 1: All of the scenarios here generally involve US shows and thus US laws.

13 comments on “How Tech Mistakes in Media Harm Us All”