Cloud storage is useful, but it has many confusing and competing alternatives.

Knowing how you use online storage will help you choose the correct provider with the correct set of features at an appropriate price.

I use Dropbox, OneDrive, Google Drive, iCloud, and Amazon Web Service’s Simple Storage Service (S3) for online (“cloud”) storage and backup. Each has their pros and cons, and each has a role in my setup. (I use them all to some degree or another.)

I was reviewing my costs some time ago and noted that I have over a terabyte of photographs safely backed up to S3. I concluded that S3 is both inconvenient (it isn’t really “simple” to access) and possibly my most expensive option.

Thanks to a recent change, I’ve settled on Dropbox as my most effective online storage solution.

What I started with

Most of my backups, and specifically my terabyte of photographs and videos, were on Amazon’s S3 online storage. It’s handy in that you only pay for what you use, and it’s exceptionally reliable. I continue to store several things, such as my podcast and self-hosted video files, there. But S3 isn’t really designed for the “average” computer user to use directly, as I do.

As a Microsoft Office 365 user, I have access to at least a terabyte of Microsoft’s OneDrive storage; five terabytes if I spread it across multiple accounts. Until now, I’ve used this extensively, particularly since OneDrive is so tightly embedded into Windows 10. I had been storing all my (encrypted1) records, music, and other files of convenience for online and off-site backup. With the OneDrive app on my phone, I could access any of the files2 no matter where I was.

I recently added Google Drive to my business’s online storage. I did this shortly after discovering that the server hosting my websites could back itself up directly to Google Drive, which was significantly less expensive than using the storage provided by the hosting provider. In addition, all my websites that had been backing up to Amazon S33 could back up to Google Drive as well. I also use Google Drive to share certain files — mostly Google Docs — with my staff and others.

I’ve had Dropbox seemingly forever. Until now, it’s been a free account, starting at 2 gigabytes of storage, augmented by their referral plan up to a capacity of 22GB. Unfortunately, 22GB is not 1TB, and that’s what I need, if not more.

After analyzing the situation and the alternatives, I settled on Dropbox. Today, I store all my photos, records, music, and everyday files in Dropbox, with portions encrypted using Boxcryptor. (My server backups remain in my business’s Google Drive.)

Here’s why I made that decision.

1. Dropbox is everywhere I want to be.

I’m a multi-platform guy. I regularly use Windows, Mac, Linux, iOS, and Android, sometimes all at the same time. Dropbox is the only service supported on all those platforms. (It’s on iOS as well, but I am not… yet.)

One of my ongoing frustrations with relying heavily on OneDrive is that while there’s a reliable client for Windows, Mac, and Android, there is no formal support for Linux.  The Ask Leo! web server runs Linux, and one of my older desktop machines runs Linux Mint and acts as a backup repository. While there are third-party solutions to sync Linux to OneDrive, I was never able to get them to run reliably.

Amazon S3 worked just about everywhere except my phone. Even then, it was primarily through command line programs or via integration into third-party file transfer (ftp) utilities. There’s no real automatic synchronization of files without those third-party tools, and my experience was that it was frustratingly slow to use them.

Dropbox is installed and working on all the platforms I use.

Synchronization is a feature in Dropbox, Google Drive, and One Drive. When a file is changed, added, or deleted in one place, that change is automatically made across all installations of the tool for that account. As I copy photos to a synchronized folder on my laptop, those files are automatically uploaded to the cloud and then downloaded to the other machines on which I have the same cloud storage installed.

For me, Dropbox has proven to be the most reliable. If two of my machines running Dropbox are on the same local network — say two machines in my home — they transfer directly, without the slowdown or data usage of sending the data up and down my internet connection. Internet connections come and go, especially while traveling, and Dropbox appears to be very resilient. It transfers when it can, pauses when it can’t, and transparently resumes when the internet connection is available once again.

I wrote the original version of this with a somewhat unstable internet connection while traveling.4 I’m relying on Dropbox to back up the photos I take on my trip, and it’s just quietly doing its job in the background without any fuss.

One of the major concerns about synchronized cloud storage is that if you corrupt or delete a file, that “change” will be automatically replicated across your storage, corrupting or deleting all copies of the file. While that sounds inconvenient, it becomes a much more serious concern if it’s ransomware encrypting all the files in your cloud storage folder.

Dropbox Professional includes 120 days of file history. (Basic/Free and Plus plans include 30 days.) This makes it possible to recover files as they were before the corruption took place.

OneDrive also includes file history from three to 30 days, depending on whether its Recycle Bin is full.

Google Drive, from what I can see, doesn’t include file history.

Amazon S3 does not.

Given the concerns about data loss considering malware and other threats, file history is a compelling feature.

Selective Sync is a feature that allows you to specify which folders are and are not downloaded to a particular machine. My terabyte of photographs, for example, is present only on my primary desktop machine and a machine in my basement. Certain sub-folders of photos (typically those I’m actively adding to as I travel) are present on my laptop as well. Other machines on which I have Dropbox installed see that the files are available, but they are not automatically downloaded. (All files and folders are always present in the cloud.)

This lets me easily pick and choose which portions of my cloud storage account I want replicated to any specific machine.

OneDrive includes a similar feature. Google Drive and S3 do not.

There’s (much) more to it all than simply the cost. I went for a slightly costlier option in Dropbox because of its stability and ubiquity. That being said, cost is one of the first things most people look at.

* Approximate, based on annual payments and my need for at least 2TB of space.

5. Dropbox is cost effective for me

Dropbox’s Professional plan includes three terabytes for around $200 per year.

Since I continue to use S3 for other things, it’s difficult to put an exact figure on how much I was paying for the storage replaced by Dropbox, but I estimate it was close to $500 a year. In addition, since it didn’t include synchronization tools, it all needed to be managed manually, requiring more of my time.5

Google Drive (now Google One) is less expensive at $100/year for two terabytes. It doesn’t appear to include file history and requires third-party tools for Linux support. If you work primarily in the Google eco-system, though, and can compensate for the lack of Linux and history, it’s a pretty good deal.

Microsoft’s OneDrive is complex to compare. A terabyte free with Microsoft Office is pretty compelling … if you have Microsoft Office. At $100 per year, though, it’s almost as cost effective to get Office just for the online storage, as long as a terabyte is enough. Much like Dropbox, it does include file history, though as I mentioned, Linux isn’t supported directly. That the OneDrive client is baked into Windows 10 & 11 also makes this a convenient solution if you work primarily in the Microsoft eco-system. On the other hand, OneDrive’s approach to backing up some Windows-standard folders is considered by many to be over-reaching and quite confusing.

Bottom line: it’s Dropbox for me

Dropbox fills my needs nicely. I could cut costs even more by relying on OneDrive (I’d have to get or somehow manage additional space beyond that first free terabyte) or Google Drive.

Particularly when I’m on the road, being able to access my saved reading materials, recent photos, and more via my phone has proven handy. That my photographs — which I copy from my camera to my laptop — are automatically backed up to the cloud and to my machines back home as I travel also adds a level of safety and security.

For me, Dropbox seems the right choice.

Consider your options when it comes to cloud storage. Not only can you use it safely, but the various providers all have different strengths and weakness that may affect your decision, as they affected mine. 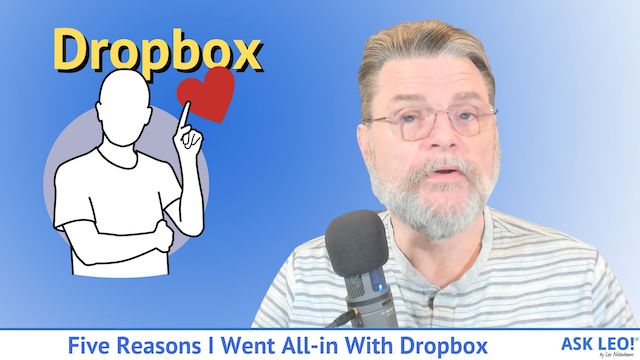 4: My VPN seems to occasionally disconnect for reasons unknown, so the internet connection is frequently disconnecting and reconnecting with and without the VPN. Dropbox just plods right along.

5: Ironically, I do believe many of the other cloud storage providers use Amazon S3 as their backend storage. Clearly they negotiated a better deal than I can.

28 comments on “Five Reasons I Went All-in With Dropbox”