For years, the standard practice has been to assume that eight-character passwords made up of sufficiently random characters was enough. Not any more. Not even close.

For a long time, the common thinking was that the best, most practical passwords consisted of a random combination of upper and lower-case letters, numbers, and a special character or two. If so composed, password length needed to be only eight characters.

Randomness remains important, but as it turns out, size matters more. Much more.

Longer is better. Traditional eight-character passwords are now easily compromised. A password should be 12 characters at a minimum — ideally 16 or more. Using a multi-word passphrase makes even longer passwords possible and easy to remember.

When you hear about large numbers of accounts being stolen by a hack at some service provider, you’re naturally concerned the hacker might now have access to your account names and passwords. If the service stored your actual passwords, that could indeed be the case. (If a service is storing your actual passwords,1 they don’t understand security or have made some horrifically bad decisions.)

And what’s great about hashes is that you can calculate a hash from a password, but you cannot calculate the password from the hash.

As a result, one would think that by being hashed it’d be pretty unhackable, right?

Sadly, not so much.

The most common type of password attack is simply a high-speed guessing game. This doesn’t work  on an actual log-in page; they’re slow and deny further access after too many failed attempts. But this technique works wonderfully if the hacker has the entire database of account and password hashes sitting on his computer.

These attacks start with an exhaustive list of possible words and known passwords (including names, profanities, acronyms, as well as lists of passwords discovered in previous breaches) and perhaps a few rules to try interesting and common ways that people obfuscate words. They calculate the hash of each guess, and if it matches what was found in the database of account information they stole, they’ve figured out the password for that account.

It’s easy for hackers to make an amazing number of guesses in a short amount of time.

That’s why you’re not using a short password or common obfuscations, right?

That’s why a password created from a totally random combination of characters is best. It forces hackers to move on to a true brute force attack of every possible combination to gain access.

Computers are fast. In fact, the computer on your desk is so fast that its ability to do simple operations is measured in terms of billions of operations per second.

Creating a password hash is not a simple operation, on purpose. However, it’s still something that can be done very quickly on most machines today. Spread the work over a number of machines — perhaps a botnet — and the amount of processing power that can be thrown at password-cracking is amazing.

The net impact is, it’s now feasible to calculate the encrypted hash values for all possible eight-character passwords comprised of upper and lowercase alphabetic characters and digits.

This seems like a lot, until you realize that an off-line attack (which is easily performed once you’ve stolen a database of usernames and encrypted passwords) can be completed in a few hours. (This assumes technology that can “guess” something like 10 billion passwords per second — which is quite possible.)

It doesn’t matter what your password is; if it’s eight characters and constructed using upper and lowercase letters and numbers, the hackers now have it — even if it was well hashed by the service they stole it from.

As we’ve seen, eight-character passwords give you over 221 trillion combinations, which can be guessed in an offline brute-force attack in hours.

Sixteen takes the calculation off the chart.

What about special characters?

I left out special characters.

Let’s say the system you’re using allows you to use any of 10 different “special characters” in addition to A-Z, a-z, and 0-9. Now, instead of 62 characters, we have 72 possibilities per position.

That takes us to 700 trillion possibilities for an eight character password.

Compared to sticking with the original 62 letters and numbers, adding only a single “normal” character makes a nine-character password significantly more secure.

That takes us to over 13 quadrillion possibilities.

Yes, adding and using special characters makes your password better, but significantly better yet is to add one more character.

The difference is really a semantic one, but in general:

Why passphrase? Because they’re easier to remember, so it’s easier to make long ones — and as we saw, password length is the single easiest way to increase the security of a password.

“BT6aKgcAN44VK4yw” is a very nice, secure 16-character password that’s difficult to remember. In fact, about the only way to use this is with password manager software that remembers it for you.

On the other hand, “Its fleece was white as you know nothing John Snow”, at 50 characters, is wonderfully long, secure, and most of all, memorable. Much like the now canonical example of “Correct Horse Battery Staple“, you might even have a difficult time forgetting it.5

The biggest problem with passphrases? Many services that use passwords don’t allow spaces or such lengthy passwords.

Shouldn’t services fix this and do better?

Absolutely, they should. And many do.

As I’ve stated above, passwords shouldn’t be kept in plain text anywhere by the service at all, yet some do.

To be safe, you have to act like they’re all at risk.

The bottom line for staying safe is simply this:

Even the best eight-character passwords should no longer be considered secure. Twelve is “good enough for now”, but consider moving to 16 for the long run. 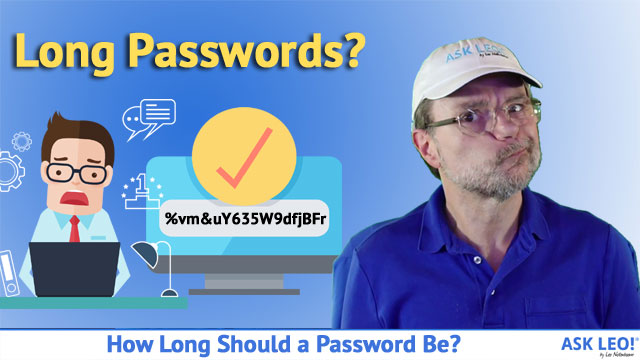 1: If they can respond to an “I forgot my password” request with your actual, current password, then they have stored your password. This is bad. Best practice is to reset it to something new, either via a reset link or by emailing a new password to you exactly once, after which the service no longer has it.

2: For the curious, I’m using an un-salted sha256 as the hashing function here. That’s technically better than the commonly-used md5 or sha1.

4: Many of the numbers and attack estimates here come from or are based on GRC.com’s excellent Password Haystack page. Included there are links to an excellent Security Now! podcast segment discussing password length and how length really does matter.

5: Particularly if you’re a Game of Thrones fan. And yes, I know that John Snow is actually Jon Snow. That’s another level of handy yet easy-to-remember obfuscation.