If you’ve decided you’re never going to trust “the cloud”, you can stop reading now as well. There’s no getting around the fact that OneDrive is, at its heart, a cloud-based service.

If you have Windows 10, especially if you have Microsoft’s Office 365, you already have OneDrive available to you. (If not, it’s easy to get.) If you’re interested in learning how you can put OneDrive to use, read on.

OneDrive is very similar to other cloud storage services, like DropBox, Google Drive, Box, and others.

At its most basic, it’s simply file storage space on Microsoft’s servers (aka “in the Cloud”1). By storing files there, you can access them anywhere, from almost any device with an internet connection.

You can, of course, access your OneDrive files by visiting onedrive.com. Once you log in to your Microsoft account, all the files and folders you’ve added to OneDrive will be available to you, along with the ability to create more folders and upload more files.

While OneDrive is, in one sense, nothing more than an online repository for the files and folders you care to share, its true power comes from using the OneDrive app, rather than just visiting the website. Using OneDrive on your PC, you designate a folder (typically “C:\Users\<username>\OneDrive”) as your OneDrive folder. This folder contains a copy of all the files you have stored in OneDrive.

One of the rules of thumb for a comprehensive backup strategy is that you have important files backed up “off-site”, meaning stored in some other physical location. That way, if your home suffers a catastrophe that destroys your computer and the backups you keep there, you’ll still have a copy of everything important elsewhere.

For example, configure your word processor to create new documents within your OneDrive folder by default. Now every new document you create will automatically be uploaded. Every update to the document will be automatically synchronized to online storage without your needing to think of a thing.

I do this all the time. The default storage location I use for screenshots is in my OneDrive folder. My default Documents folder is a subfolder of my OneDrive folder. Without having to lift a finger, any documents I edit or create there are backed up online.

This is almost embarrassing, but it’s the reality of the state of networking today: it sucks. It should be trivial to connect two computers together on a local area network (LAN) and use that connection to quickly and easily copy files from one to the other. Sadly, many people resort to copying files to USB sticks and physically transferring those between machines because it’s easier than trying to get networking to work.

Earlier, I mentioned that I save screenshots into a folder in my OneDrive. I don’t do it to back them up; I do it because the machine I’m taking the screenshot on is often not the machine on which I’m doing my work.

For example, I often take screenshots in a fairly pristine Windows 10 environment3. By automatically saving those screenshots in OneDrive, they show up on my other machines within moments — including the Mac Pro I’m writing this article on. Or the Dell laptop in the other room. Or the MacBook Pro with which I travel. Without thinking about it at all, I can work on any of those machines at my convenience, and while it may sound a little far-fetched that I’d need my screenshots on upwards of four machines, it comes in handy more frequently than you might think.

You can create a publicly-accessible link to any file or folder you have stored in OneDrive. This makes it a great way to share files with others without resorting to emailing huge or multiple attachments.

For example, here’s a link to an image I have stored within my OneDrive.

I use this technique extensively with my assistants. We each have shared cloud folders4 in which we have documents accessible to each of us. It’s a key component of how we pull together The Ask Leo! Newsletter each week.

Plenty of items in my OneDrive are simply files I’ve placed there. Should someone hack my Microsoft account5, or should the OneDrive servers become compromised, those files will be visible. Oh well. My approach to this is that for these files, “oh well” is the appropriate answer.

I also use Cryptomator (and previously6, BoxCryptor, which operates in the same fashion) to encrypt anything I consider to be sensitive. This allows me to use almost all the features and functionality built into OneDrive while being confident my files are accessible only to me. (It turns out that nearly two-thirds of my OneDrive usage is encrypted.)

You probably already have OneDrive

Microsoft has been promoting OneDrive, most notably by including it in Windows 10.  You automatically have 5GB of free storage with your Microsoft account. If you happen to have Office 365 (Microsoft’s subscription service for the Office programs) you have up to five terabytes of OneDrive storage (1TB per user for up to five users). Compared to other service’s premium storage plans, it’s almost worth getting Office 365 for the storage alone!

As I said, it may be Microsoft’s most overlooked service. 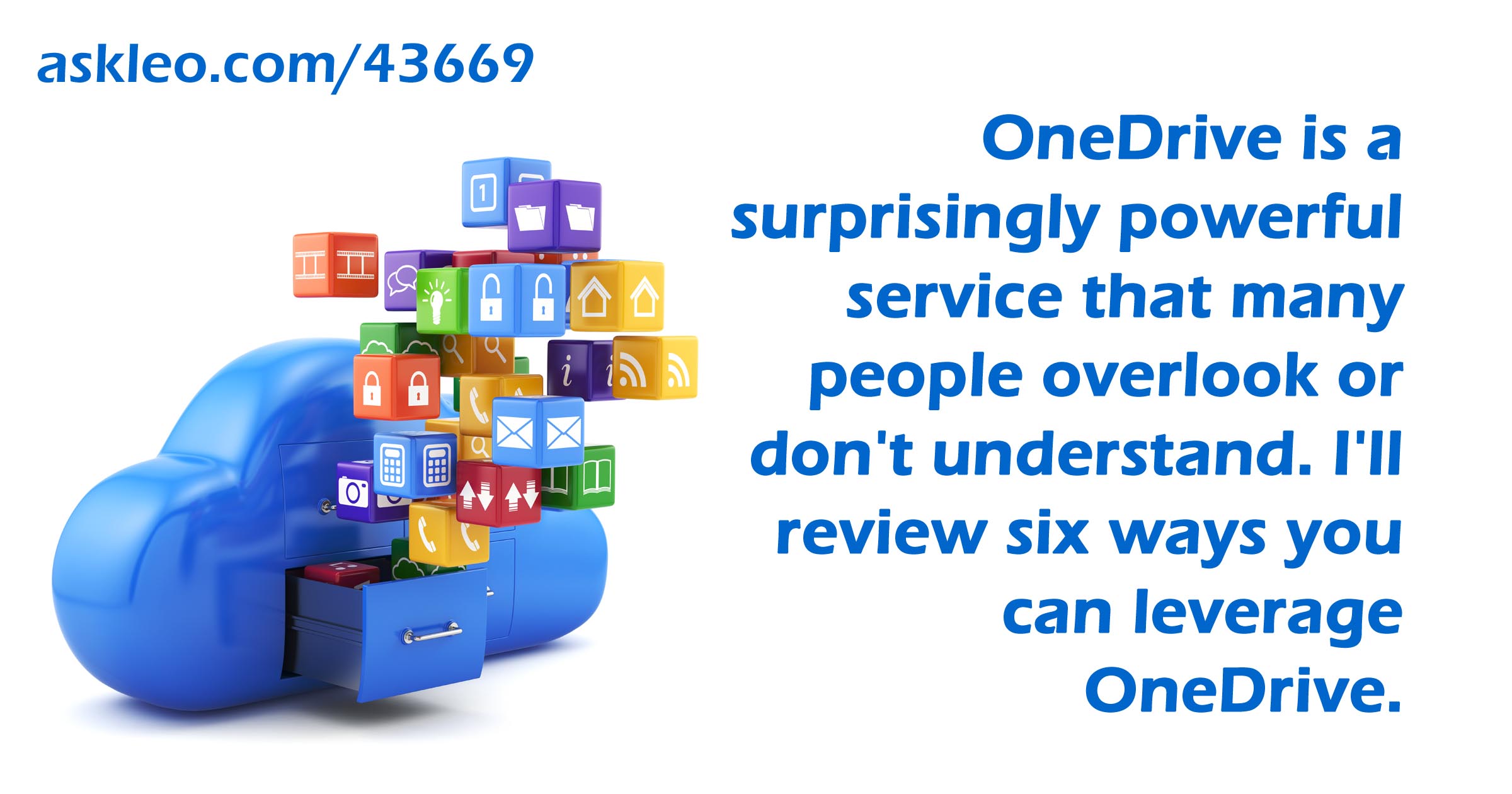 2: Well, not literally “instant”. Of course, it’s subject to the speed of your internet connection, and assumes you are connected to the internet and have OneDrive running and configured. The rest of this article makes that assumption.

6: They’re both good. Cryptomator is newer and open source. I switched to it more as a test, and never came up with a compelling reason to switch back.

64 comments on “Half a Dozen Uses for OneDrive”