Malicious intent is a common knee-jerk reaction to technological trials and tribulations. Unfortunately, it's usually the wrong assumption to make.

That pithy statement is referred to as “Hanlon’s Razor“.

It keeps coming to mind as I hear from people who are absolutely convinced that malice is at play in whatever they’re experiencing.

Many people jump to malicious intend whenever they experience a problem with the computer or technology. That’s rarely the case. More common are simple missteps, mistakes, failures, and errors. Looking for a malicious actor when there isn’t one is time better spent focusing on the more likely causes of odd behavior.

When it comes to computers and technology, I extend the aphorism a little further.

Never attribute to malice that which is adequately explained by stupidity, error, or failure.

Any or all of those can be used to more than adequately explain the various and sundry problems we experience with technology.

This topic came to mind recently when I received a question about an individual’s inability to access a specific website. He knew other customers of his ISP also could not access the site, whereas customers of other ISPs could.

Clearly, to him, his ISP was blocking the site.

There are other more plausible explanations.

Or it could be something else.

Malice is possible, as might be stupidity somewhere along the line; but errors and failures are much more likely.

My computer is behaving oddly…

Whenever someone’s computer behaves in an unexpected way, many people’s first response is, “Oh my God, I’ve been hacked!”

Hacking as an explanation for odd computer behavior is so rare, I’m very comfortable just saying it’s not the cause of the problem you’re experiencing.

Software bugs, hardware failures, failed updates, flaky internet connections, worn-out batteries, exceeded disk capacities, and many more things are much more likely. All of these manifest in obvious ways that make it clear what’s going on, or in ways that appear completely random as if the machine is “possessed” — just not by hackers.

And that doesn’t even begin to touch on what we lovingly refer to as “operator malfunction”: mistakes made by the person using the computer.

Ads are stalking me…

I have to include this class of behavior here, though it may be the most difficult to accept.

Without a doubt, there are privacy issues on the internet. But ads following you around is not one of them. Showing ads for something you’ve seemed to express an interest in isn’t malicious; it’s marketing. It’s nothing more than salesmanship using today’s technology.

Creepy? Maybe, if you don’t understand what’s happening. But malicious? No. Not in my book.

Things change just to piss us off…

I hear this one after any major change to an operating system, application, or web service. Things looked one way yesterday, and look different today. Companies must be doing this just to annoy us, right?

If you think about it, that doesn’t even make sense. Change intended to annoy your customers is business suicide, as is change for the sake of change. No company wants or does that.

Here’s one thing that can dramatically improve your relationship with technology: embrace the most important attitude.

If your favorite OS, app, or website never changed, it would be just as bad for business. Never changing means not keeping up with current trends, taking advantage of new technologies, and adapting to new ways of doing things. You may be happy with an operating system that works the same way as it did 20 years ago, but the company that made it would be out of business if that’s what they offered.

Businesses that don’t change, adapt, and grow, die. It’s a simple as that.

Growth is not malicious. Bad decisions about how to grow are not malicious — they’re just bad decisions. To refer back to my extension of Hanlon’s Razor, they’re errors or failures.

That you’re pissed off is certainly not intentional.

So, is there malice?

Of course, there is malice out there. Hackers hack, scammers scam, and spammers spam. Businesses knowingly leverage your information in malicious and often illegal2 ways.

My point here is that when you experience something unexpected with your computer, technology, online experience, or data, unless you have evidence that says otherwise, malicious intent isn’t the place to start looking.

And, honestly, that’s a good thing. More mundane causes are easier to deal with.

What is the most common type of hacking?

By far the most common type of hacking, in terms of success, is phishing. Most news-making large-scale breaches, at some point, started with an individual within the affected organization falling for a phishing attack, and opening a malicious attachment, or visiting a malicious website. Even when a vulnerability in software somewhere may have been leveraged, it’s often the successful phishing attack that provides the “foot in the door”. 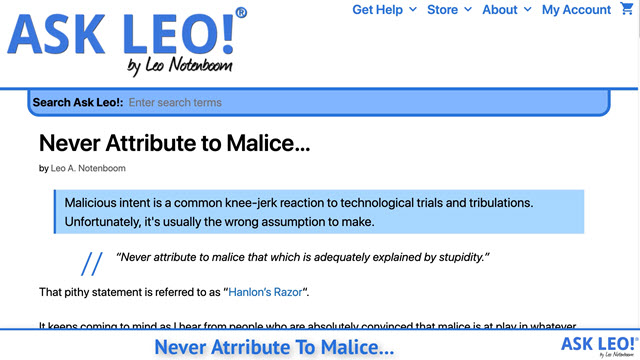 1: Every website, server, and device connected directly to the internet is under some form of nearly constant attack. Really. Any server operator can find the evidence in their server logs. This is something you can attribute to malice.

2: Interestingly, the two are not synonymous in either direction.

16 comments on “Never Attribute to Malice…”