We keep hearing that SSDs and other flash-based drives wear out. Particularly when it comes to SSDs, there are ways you can see how close to wearing out your drive might be.

SSDs are awesome. They’re fast, they have no moving parts, and they use less energy than traditional spinning-platter hard drives.

The problem, of course, is that they wear out.

Actually, that’s only part of the problem. What we’d really like to know is when.

Unlike traditional hard drives, there are a couple of approaches to making an educated guess.

The specifications for an SSD model may include a TBW, or “terabytes written” measure of the minimum life expectancy. You can then use a tool to examine the amount of data written to your drive to determine how close to the TBW it is. The drive may last longer or fail earlier, but this lets you judge your risk against the manufacturer’s expectations based on your current usage.

The more you write to them, the more SSDs wear out. Most SSD manufacturers specify how many bytes can be written to the drive within the device’s guarantee.

For example, the machine I’m using has two SSDs.

You can see that the warrantied life is proportionate to size: 600TBW per terabyte of device storage, which makes sense. A device twice as big should be able to handle twice as much data in its life.

So, now that we know what the warranty covers, how do we figure out where we are?

We need to download and run a tool for the next step, as Windows’ own tools don’t make this information available (or, at least, easy to find).

CrystalDiskInfo has been around for a long time and is just the tool we need. Download and install it (as always, being careful to avoid misleading ads on the site that try to trick you into downloading something else).

A couple of things of note:

The information we’re looking for is Total Host Writes. In the case of my C: drive, I’ve written 18.5TB to the drive in the roughly two years I’ve owned the machine. That bodes well for the life expectancy of this drive if my usage pattern doesn’t change. A TBW of 600 with a usage rate of 9.25TB/year (half of the 18.5 I used in two years) would indicate 64 years of life left. Well beyond the calendar warranty of five years, and certainly longer than my machine — and I — are likely to be around.

My other SSD, the D: drive, is in even better shape.

There, the Total Host Writes equal 3.5TB. With a TBW of 1200, it has hundreds of years of life left in it. Once again, well beyond the official five-year warranty period.

SSDs are a form of flash memory. And flash memory wears out. That’s particularly important to understand when it comes to your USB flash drives: they won’t last as long as SSDs. Can a USB Thumb Drive “Wear Out”?

A warranty is not a guarantee1

I need to point out something important. Just because something is warranted for a certain amount of time, or a certain number of writes, doesn’t mean it can’t fail sooner

— perhaps even much sooner.

A rating like TBW is a statistical game played by the manufacturer. They’re confident enough in the technology that the vast majority of their devices will last well beyond this point. They’re so confident that they’ll refund your money and/or provide a replacement device if yours doesn’t.

It also doesn’t mean that once the TBW is reached, the device will suddenly fail. In reality, it’ll probably last much longer. It’s simply that the risk of failure increases beyond a point that the manufacturer is willing to commit to.

Your SSD could fail at any time. Or it could outlast you.

A warranty won’t recover your data

Being well ahead of a drive’s TBW, as I am for both of my drives, doesn’t mean you can stop backing up.

As I just said, there are no guarantees — my SSDs could still fail at any time. That they’re “young” in terms of TBW would indicate that the risk is low of that particular kind of failure, but the risk is never zero. Besides, there are so many other ways that things could fail beyond the SSDs wearing out or having wear or internal problems.

If your SSD fails, and you get a replacement via warranty service, that replacement won’t have your data.

Back up. Always. Anyway.

Which lasts longer depends on several factors. The magnetic media of a spinning-platter HDD doesn’t “wear out” the same way an SSD does, and is likely to retain its data much longer, regardless of how it’s used. On the other hand, SSDs have no moving parts, meaning that they’re likely to last longer in physically demanding environments like mobile devices and laptops.

How do I increase the lifespan of my SSD?

The best way to increase the lifespan of an SSD (or any flash-based memory or drive) is to reduce the amount you write to it. For SSDs, that means don’t defragment them, which is a very write-intensive operation with little to no benefit for SSDs. There’s an argument that any files to which you write frequently (or even constantly, in the case of certain types of databases) are candidates to move to a non-SSD drive. In general, however, modern SSDs last long enough for this to no longer be a significant concern.

Is upgrading to SSD worth it?

The consensus is not only that upgrading to an SSD is a good idea, but that it’s one of the most effective things you can do to improve the performance and lengthen the usable life of a computer still using an HDD. While prices are still higher than comparably sized HDDs, cost continues to come down, and the speed tradeoff is often well worth the expense. 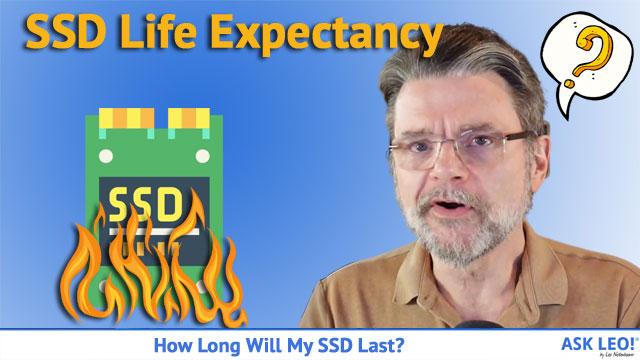 1: I realize that in certain scenarios, they can be considered synonymous. A little slack, please, I’m trying to make an important point.