It’s as safe as you want it to be if you use it properly.

As security compromises seem to happen regularly, many ask, "Is using the cloud safe?" It's as safe as you make it.

One of the comments I received on my article on lessons learned from a fairly public online hacking was very concise:

“That’s why the cloud is dangerous.”

I think a lot of people feel that to varying degrees.

I strongly disagree. Using the cloud can absolutely be safe.

I also think that believing the cloud is dangerous prevents you from taking advantage of the things it can do for you — things like protecting your data.

It also misses the point that there are a number of things you’re already doing “in the cloud” safely, and have been for years.

Safety in the cloud

The so-called “cloud” is new in name only; we’ve all been using online services for decades. They’re no more dangerous now than they were then, and quite likely less so. The only new thing is the number of services available. If we take responsibility for our own security, using the cloud — aka online services — can be safe and enrich our lives along the way.

What is the cloud?

I have to start by throwing away this silly term “the cloud.” It’s nothing more than a fancy marketing term. Ultimately, it has no real meaning.

The cloud is nothing more than services provided online over the internet.

Seriously, that’s all it is.

Another way I saw it recently was this: “‘The cloud’ is simply using someone else’s computer.”

Be it services that provide a place to store your data, enable you to communicate with others, provide applications, sell you things, or answer your technical questions, it’s all happening in the cloud.

And that’s nothing new.

The cloud is new in name only

You’ve probably been using online services long before anyone thought to slap the name cloud on ’em.

Hopefully, you get the idea.

I really want to drive home the point that this thing people are calling the cloud is nothing new. You’ve been using it already, probably for years, before that silly name was attached to it.

So let’s jettison the name and all the baggage comes with it, and call this what it really is: online services.

OK, fine. But is the cloud dangerous?

No more so now than it’s ever been.

In fact, I’ll claim that the average online service has become safer as service providers have learned from mistakes and implemented industry best practices.1

If anything has changed at all, it’s the breadth of available online services and the number of people using them.

The fact is that any tool, when misused, can be dangerous.

The same is true for any online service, be it those generating the latest buzz or those you’ve used for years.

We’re all at the mercy of service providers

At this point, many folks point out that security breaches are often the fault of, or related to, a problem at the provider of the service in question.

Many are, it’s true.

But you know what? That’s not new, either.

I’m not (not! not! not!) trying to excuse service providers for making mistakes or screwing up. Every fiber of their corporate being should work to prevent security-related errors and mitigate the impacts when they occur.

But the reality we have to accept is that ultimately, service providers are staffed by humans, and humans make mistakes. Saying mistakes should never happen is unrealistic.

Besides, when it comes to security issues, we are most often our own worst enemies.

No one can protect you from you

Let’s go back to the Mat Honan hack for a moment, which is where that “the cloud is dangerous” comment originated.

Mat didn’t lose his data because of the breaches he experienced.

Mat didn’t lose his data because of problems with the online services (though there definitely were issues).

He lost his data because he wasn’t backed up. Even if he had not been hacked, he was at high risk of losing everything anyway, had he lost his laptop or experienced a simple hard-disk failure.

Had he been backing up his data, I’m betting there wouldn’t even have been a news story.

And I’ll say it once again: this is not new.

How to use online services safely

Using online services safely really boils down to not much more than the guidelines we’ve all heard before.

All, of course, augmented by a dose of common sense.

Only the part about possibly using different email addresses for different accounts is relatively new. Everything else should sound really, really familiar.

It really can be safe

To be clear, there’s no such thing as perfect security, and that’s true whether you keep your information securely locked away only on your own computer in your bedroom, or if you store it in the cloud. There’s always something that can go wrong.

By following basic security guidelines, there’s no reason that most of the popular online services can’t be used safely.

Used properly, they can even add security by providing things like additional backups, throw-away email accounts, data replication, and more.

You do have to assume responsibility for your own security, and that includes taking reasonable precautions to prevent problems and additional steps to minimize the impact should an issue arise.

Yes, you can avoid online services altogether (remember, that means walking away from email as well), but you’d miss out on so many of the opportunities the internet has to offer.

Rather than asking “Is the cloud dangerous?”, learn to use it safely. I believe that in the long run, you’ll be much better off for it.

Mat Honan, the victim of that public hacking I mentioned at the beginning, published an update detailing how he’s recovered from his hacking.

One quote struck me: “I’m a bigger believer in cloud services than ever before.”

This is the gentleman whose experience started this very discussion. While others are quick to blame the cloud, after all is said and done, he’s not one of them.

Find his story at Mat Honan: How I Resurrected My Digital Life After an Epic Hacking. 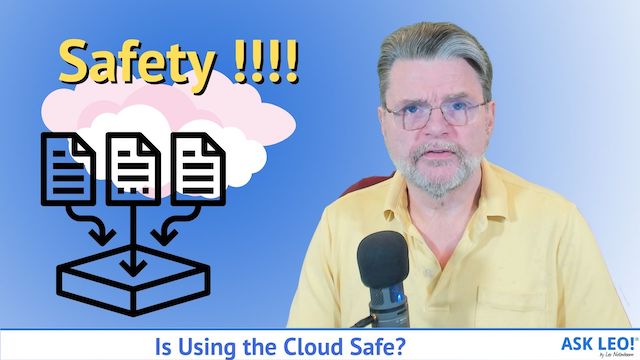 1: I don’t have the data to back it up, or I’d call it out more prominently in the article, but my feeling, based on being in this industry for as long as I have, is that by and large,the state of the art in online security is improving overall. If it seems like it’s happening more often, my sense is that it’s because there are more online services now than there ever have been. My gut tells me that the number of failings as a percentage of available online services is going down.

47 comments on “Is Using the Cloud Safe?”