What to do when your computer gets slower and slower over time.

The most effective way to speed up a system is to clean it up, have it run fewer programs, and give it more resources.

Please tell me how I can make my PC run faster. My machine’s just getting slower and slower.

There are several steps you can take to try to speed up your system.

Some steps include hardware changes; others tweak the software installed on your machine.

And some could tweak your habits.

RAM is cheap, and if your machine can take more, it can be the fastest way to speed up a computer — even one that is poorly configured (which we’ll address in a moment).

Windows loves RAM. Practically speaking, it’s very difficult to have too much.

If your machine only meets the minimum requirements for the version of Windows you’re running, then you probably don’t have enough RAM. The published minimums are just that: the bare minimum for a functioning system. If you want a system that works well, you want more RAM. My rule of thumb is to start with at least twice as much as the minimum requirements state, and ideally as much as your machine can handle.

Upgrade to an SSD

SSDs, or Solid State Drives, have become affordable. While they generally don’t reach the same capacity as their spinning-platter brethren, they typically have more than enough space to act as a replacement drive for most machines. If you have a traditional HDD, replacing it with an SSD can have a dramatic impact.

SSDs improve system speed simply by being faster to read. Write speeds vary, so the gains aren’t as dramatic, but for reading data, SSDs are significantly and noticeably faster.

The process for switching to a SSD is the same as replacing your hard drive with another.

There used to be a concern about SSD lifespan, but they now typically outlast the useful life of the machine they’re in.

Nonetheless, I strongly suggest that you plan for failure anyway and back up regularly. (This holds true with a traditional hard disk, since they, too, can fail catastrophically and without warning.)

By far the biggest reason machines slow down is there’s too much software running.

Note that I said running, not installed. Installed software just takes up space on your hard disk. Running software uses RAM, uses your CPU, and can use disk and network resources as well.

It’s the software that’s running on your machine that can slow it down.

And software seems to accumulate over time, making your machine seem slower and slower.

PUPs and other foistware

In recent years, the amount of software installed surreptitiously when you install something else has exploded. It’s not at all uncommon to encounter a machine whose browsers are loaded with unwanted toolbars and a taskbar filled with icons for unrecognized and unwanted pieces of… well, I’ll call them “software”, though other words could be used.

Start by reviewing How Do I Remove PUPs, Foistware, Drive-bys, Toolbars, and Other Annoying Things I Never Wanted? It’s a good first step to removing software you didn’t ask for and don’t want that may affect your machine’s performance.

Auto-start is not always your friend

Many programs install components that start automatically when you start Windows, whether you want them or not. Unfortunately, that means that they’re typically always running, stealing resources from the programs you do want.

There’s no checklist for what you do and don’t need. There’s no canonical list of the things you can remove from startup. And to be completely honest, not everything that runs automatically contributes to performance issues, though there’s no list of the ones that do, either.

It’s unfortunately vague, but that’s the way it is.

The problem is that everyone’s needs are different. Ultimately, it depends on the software you use and the way you use it. The only advice I can give is:

Of course, if you want to go even further down the rabbit hole, you can run a program like Autoruns, a free download from Microsoft, which will show you everything that runs as part of starting up Windows. I’ll warn you it’s quite geeky, and it’s easy to harm your system by disabling the wrong thing.

As we’ve seen, sometimes installing software does more than just put files on your disk. Sometimes it installs things that run automatically whether you want them to or not. In an ideal world, we’d be able to understand what each of those auto-run items would do so we could make appropriate choices for each.

We do not live in an ideal world.

If your system is strapped for resources, it’s possible you might be contributing to its performance issues.

By running too much software at once or causing the software you run to require more resources than your system actually has.

Each of those things contributes to system slowness by adding to the CPU’s load and the amount of RAM used by your machine.

Other items to consider

Other things you could try to increase your system’s performance include:

There are many, many other tweaks of various and dubious value out on the internet, but these are the ones that I focus on as getting the most bang for the effort. 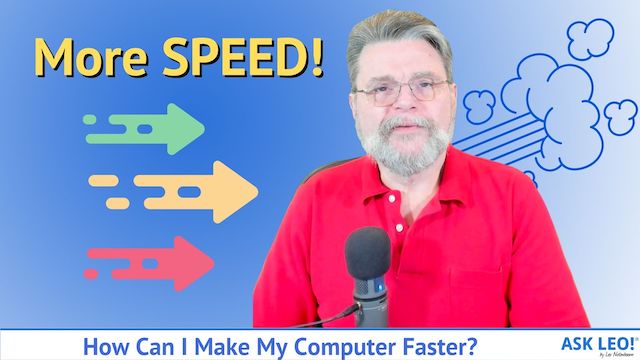 6 comments on “How Can I Make My Computer Faster?”