I lost a huge amount of research and work when my computer crashed this summer.

That’s a quote from an email I received from someone who, honestly, I expected better of. He’s a prominent figure in my industry, and someone who has a large team of people supporting him.

To have a simple computer crash cause “huge” data loss … well, as I said, this doesn’t need to happen. Ever. Not to him, and not to you or me.

Sadly, he’s not the only one running the risk.

Look at your computer, right now

I was traveling recently when a colleague mentioned that should her laptop fail or be lost, it would be a serious problem. Apparently, significant work would be lost.

Again, this doesn’t need to happen. Ever.

Look at your computer. Right now. The one you use most, perhaps the one you’re traveling with, the one that has your work on it.

Now, imagine it gone. Without warning, without recovery, just … gone.

If that would result in serious data loss for you, that’s a problem.

And again, it doesn’t need to happen. Ever.

And yet it does, over and over again. I hear stories.

In the early years of Ask Leo!, I received a plea from an overseas graduate student working on his master’s thesis. Something had happened to his online account, and he could no longer access it. He’d been hacked, and all the recovery methods were failing. And of course, this was a free account (Hotmail, if memory serves), so there was no hope of help.

Calling it a “problem” doesn’t do the situation justice. It was a disaster. That account held his only copy of his thesis. Without access, it was gone.

He had to start over from scratch.

A good friend of mine contacted me a few years ago and told me that all of a sudden, pictures wouldn’t open properly on his computer. After a lengthy investigation, we determined that the machine had been infected with one of the early instances of ransomware. The malware hadn’t completed, so he hadn’t been presented with the ransom demand. The process had been interrupted, presumably by security software detecting and neutralizing it as it encrypted his files.

Unfortunately, it was too late for a vast majority of his pictures — pictures kept only on that PC. Pictures that remained encrypted without hope of recovery.1

Pictures of his late granddaughter.

The #1 reason people don’t back up? They don’t know how, and they think it’s too hard. It’s not. And even if it was, it’s too important to ignore. Start here: How Do I Back Up My Computer?

You might say those are relatively extreme examples, and I won’t disagree.

But they’re still too common. I hear tales like these often, from desperate people grasping at straws to recover something critically important, sentimental, and ultimately irreplaceable.

It doesn’t have to be extreme to be painful. It might not be your life’s work; losing the photos on your digital camera or your smartphone is one example of data loss that might not be tragic, but can certainly hurt. And it does happen. Small, portable devices get lost. Memory cards go bad. Well-meaning friends or technicians accidentally delete things.

Stuff happens. You know it does.

I harp for a reason

Significant data loss doesn’t need to happen, and yet it does.

It happens more often and more easily than we might think.

My frustration is that it’s so easy to prevent. Yet people are scared away by details they don’t understand, poorly written and poorly documented tools that are supposed to help, and systems that have become so complex it’s sometimes difficult to understand exactly what’s where.

I get all that. I truly do. But the fact remains it can be easy, and it’s important. Even if it weren’t easy (which, I know, many disagree with) it’s still important. In fact, if something is important enough for you to work on, if you’re doing “a huge amount of research and work”, then it’s well worth investing the time to protect yourself, even at the most basic level.

The most basic level?

All the things you’re thinking of that would be lost forever?

Make a copy. Put that copy somewhere else.

But ultimately, it’s all — and only — about making copies.

If there’s only one copy, it’s not backed up.2

Learn how to use the tools if you have to, but start. Today.

Get over your fear of the cloud, and start using any of the free services for some basic automation. Encrypt if you’re working on highly sensitive documents or if you’re just paranoid.

Read An Eight-step Back-up Plan Using Windows 10’s Built-In Tools, even if you’re not running Windows 10. Many of the specific steps will work on any Windows version, and the concepts are universal.

Read How Do I Back Up My Computer? for a nice high-level overview of the various options and approaches to backing up. (In fact, have a look at all of the Best Articles: a Collection for articles on backing up and security in general.)

But above all, no matter what you read or how you do it, start backing up. Now.

If a sudden and unexpected loss of your computer and data (or phone, or account, or …) would be anything greater than an annoyance, you’re not sufficiently backed up.

I’ll continue to preach the word about backing up. To me, it’s the one thing that could save more grief than just about anything else I can talk about.

If you feel the same way — if you feel that this article and the ideas behind it have merit — share it. Share it on Facebook. Share it on Twitter. Send the link to this post up there in your address bar to the people you know aren’t backing up as they should. (And I’m betting you know quite a few.) 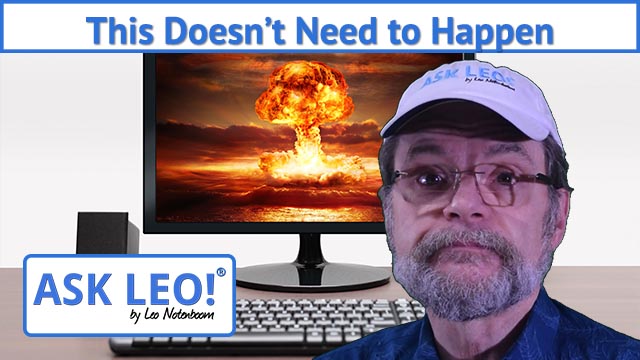 1: I actually keep an image of that hard drive, with the small hope that perhaps someday that the master keys for that particular ransomware variant — CryptoWall 2.0 — will be found. So far, no luck.

2: I know, I know … the word “copy” implies that there’s an original, implying that there are two. I’m using it in the generic sense — there’s only one: call it the original if you like.

44 comments on “This Doesn’t Need to Happen”