The end of support for Windows 10 means Microsoft will no longer issue security updates. Here's how to continue using it safely.
Applies to Windows: 10
Will Windows 10 keep working after its end of support? Can I keep using it? Or will Microsoft force me to upgrade to Windows 11?

No, you won’t be forced to upgrade.

One thing we’ve learned, from being here before, and before that, is that the risks may not be as horrific as some make them out to be.

Windows 10 will continue to work after its end-of-support date (October 2025). Applications running on Windows 10 may even get updates after then, but that’s likely to end eventually as well. While doom and gloom is always predicted, you’re likely to be more affected by decreasing application and vendor support than you are by malware specifically targeting Windows 10 vulnerabilities. Making sure you have good security software and backups is key to continuing to use Windows 10 if you choose (like it is now).

In How Long Will Windows 10 Be Supported? I cover the expected support schedule for Windows 10. The “rule” is that each feature release will be supported for 18 months after its general availability.

If you cannot or choose not to update to a specific feature release, then for you, Windows 10 end of support arrives on whatever day your currently installed feature release loses support.

The only thing that happens when support ends is that no further fixes are available, even for security-related issues.

In fact, at the end, security-related issues are the only fixes you’ll get. Actual feature updates stop earlier, typically when the last “feature release” happens.

So whatever Windows 10 looks like then is what it’ll be from then on. No changes, no fixes, no ‘nuthin.

Some may stop on Microsoft’s date. Others may stop sometime thereafter. You simply need to monitor updates for the programs you care about.

Someday, those updates will probably stop as well. It’ll be up to you to decide if you care.

So what’s the risk?

Good question. The gloom and doom scenario is that there’s an unpatched vulnerability to be found. Hackers will exploit it, and Microsoft won’t fix it.

The more pragmatic risk is that eventually, your other software will no longer be updated. You’ll have to figure out whether you can live with it or find alternatives.

The other risk is that when your computer dies, you won’t be able to get Windows 10 for its replacement. Once again, you’ll face a decision: move to the latest, most current version of Windows,  switch to something else entirely, or live with the risks.

The other important step I recommend is my old standby: regular and complete backups. If something goes wrong, you’ll want to restore to a backup. This will also protect you to some extent when Microsoft eventually takes existing Windows 10 updates and activation offline. That action would prevent you from downloading Windows 10 from scratch, but if you have a backup, you can still restore it.1

Literally, we’ve been here before:

It’s the same story in each case.

If what we’re experiencing sounds hauntingly familiar, that’s because it is. This is exactly what happened with Windows 7 some years ago, and Windows XP before it.2

And in the light of many dire predictions of catastrophe and doom… nothing happened. There were no catastrophic malware outbreaks targeting Windows 7 or Windows XP. There was no list of known vulnerabilities that hackers kept secret until they knew they wouldn’t be fixed.

Windows 7, Vista, and XP users were probably more affected by the decreasing hardware and software support for the applications they cared about.

I expect Windows 10’s “death” to be very similar: a slow fade into obscurity.

You don’t have to be in a rush to abandon Windows 10 just yet, nor do you really need to worry that much about the end-of-support date. As long as you continue to use your computer safely, you should be fine. Eventually, yes, you’ll want to upgrade, either because the software you care about stops working or you get a new machine with a new version of Windows pre-installed.

Until then, subscribe to Confident Computing! More information about Windows 10 as it nears its end of life, as well as less frustration and more confidence, solutions, answers, and tips in your inbox every week. 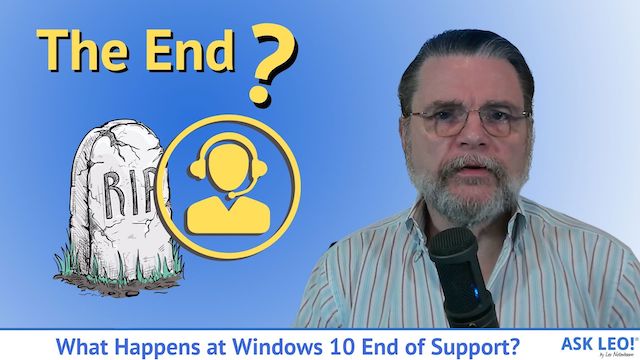 1: I believe Windows XP is in this state right now.

2: To the extent that I began this article by duplicating the Windows 7 version of it.

24 comments on “What Happens at Windows 10 End of Support?”