Not yet. When it’s time, you’ll know.

Windows 11 is out to much fanfare, hype, and confusion. Unless you have specific reasons, you don't need to upgrade yet, but there's also no reason to avoid it.
Applies to Windows: 11, 10

The questions have started rolling in.

While my most common answer — “It depends” — certainly applies, I’ll go one step further.

A year after its initial release, my answer remains no. No, you need not update to Windows 11 yet — at least not unless you have a clear reason to.

And most of us do not.

Windows 11 has been released, but there’s nothing compelling about it. The requirements remain confusing and likely to change. Windows 10 will be supported for at least three more years. Windows 11 is not something the average consumer should be concerned about until there are worthwhile reasons to make the switch.

I’m using it right now, as a matter of fact.

But regardless of its issues or improvements over time, the truth of the matter is that as far as I’m concerned, Windows 11 rates a big “meh”.

Particularly since Windows 10 is a known quantity and will be supported well into 2025 at least, I don’t see a reason to switch.

The requirements are confusing and likely to change

One frustrating aspect of Windows 11 is its changing system requirements.

Initial results are confusing. Many machines — even some newer ones — fail the compatibility test.

There are workarounds for some of the issues. For example, you may not be able to update a Windows 10 machine to Windows 11, but you may still be able to perform a clean install of Windows 11 even if the machine doesn’t meet Windows 11 minimum requirements.

Are those workarounds going to work a year from now? Two years? Three? Your guess is as good as mine.

More pragmatically, are the requirements going to stay the same given the large number of systems that apparently don’t meet them? It seems possible, if not likely, that the requirements might be “adjusted” based on feedback and publicity prior to the end of Windows 10 support.

Windows 11 feels like a Windows 10 feature update. In the past, we might have even called it a service pack. There’s nothing terribly interesting about the features listed so far.

And of course, they changed the Start menu. Again.

If there was something truly exciting about Windows 11, I might be more interested. Most of the features I’ve seen are either borderline boring or available already via other means.1

It’s as much superstition as it is anything else, and by itself, it’s not a reason to avoid anything.

And yet. There does seem to be a pattern.

Make of it what you will.

If you know, you know

There are people who can, should, and will play with Windows 11. People like me, for example.

Those folks will have valuable feedback and show the rest of us just what Windows 11 is all about.

Those people know who they are. They know how to stay safe, and they know why they want to play with newly released software.

Windows 11 on a new machine?

Perhaps the biggest update since I first wrote this article is simply this: if you get Windows 11 pre-installed on a new machine, keep it.

Just as there’s no compelling reason to upgrade a working Windows 10 machine to Windows 11, there’s also no reason to run away from it. As I said, I’m using it every day and it’s a fine OS. Just as fine as Windows 10, in my opinion.

Will Windows 11 be a free upgrade?

Initial indications from Microsoft are that Windows 11 will be a free upgrade for compatible machines running legitimate Windows 10 installations. It’s unclear if there’s an upgrade path from older versions.

Is it OK to upgrade to Windows 11 now?

It’s OK to upgrade to Windows 11 now, with the caveat that it is changing and has a few issues that might not be for everyone. There’s no harm in upgrading, but there’s really no good reason to do so yet. 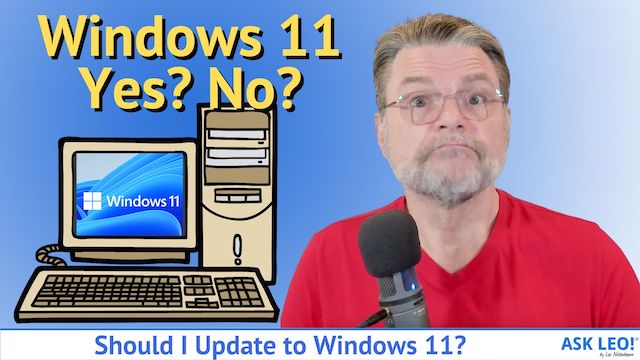 1: I installed Microsoft Teams, one of the touted Windows 11 features, in Windows 10 while I was writing this article.