Can you use Windows past its “best by” date?

The end of support for Windows 7 means Microsoft will no longer issue security updates. Here's how to continue using it safely.
Apparently there are people that believe when support for Windows 7 ends it’ll stop working. That’s just wrong, right? It’ll keep working? Can’t I just keep using it?

One thing we’ve learned, though, from being here before, is that the risks may not be as horrific as some make them out to be.

Windows 7 is still working, well after its end-of-support date. Applications running on Windows 7 may still be getting updates to this day, but eventually that’s likely to end as well. While doom-and-gloom was predicted the reality is that you’re likely to be more impacted by decreasing application and vendor support than you are by malware specifically targeting Windows 7 vulnerabilities. Even so, making sure you have good security software and backups is key to continuing to use Windows 7 if you choose.

You’re absolutely right. Well over a year after the January 14, 2020 deadline, Windows 7 is still working.

The only thing that happened when support ended is no further fixes were made available, even for security-related issues.

In fact, security-related issues are the only fixes you were getting before that date. Everything else ended back in 2015.

So whatever Windows 7 looks like is what it’ll be from now on. No changes, no fixes, no ‘nuthin.

Some may already have stopped. Others may stop in the future. You simply need to keep an eye on updates for the programs you care about.

Someday, those updates will probably stop as well. It’ll be up to you to decide if you care.

So, what’s the risk?

Good question. The “gloom and doom” scenario is that there’s an unpatched vulnerability to be found, hackers will exploit it, and Microsoft won’t fix it.

The more pragmatic risk is that eventually, your other software will no longer be updated. You’ll have to figure out whether you can live with that, or find alternatives.

The other risk is that when your computer dies, you won’t be able to get Windows 7 for its replacement. Once again, you’ll be faced with a decision: move to the latest, most current version of Windows, or switch to something else entirely?

Perhaps the most important step to keeping yourself safe is to make sure your anti-malware tools continue to work — including keeping themselves up-to-date. If your security software is no longer supported, then find an alternative immediately.

The hope is that Windows Security Essentials — which (as I understand it) shares its technology, if not its name, with Windows Defender on Windows 10 — will continue to be updated for some time. How long? No idea. You need to keep an eye on it.

The other very important step I recommend is my old standby: regular and complete backups. If something does go wrong, you’ll want to restore to a backup. This will also protect you to some extent when Microsoft eventually takes existing Windows 7 updates and activation offline, which will prevent you from reinstalling Windows 7 from scratch.1

No, literally, we’ve been here before: Will Windows XP Keep Working after Support Ends?

If what we’re experiencing sounds hauntingly familiar, that’s because it is. This is exactly what happened with Windows XP some years ago.2

And in the light of many dire predictions of catastrophe and doom … nothing happened. There were no catastrophic malware outbreaks targeting Windows XP. There was no list of known vulnerabilities that hackers were keeping secret until they knew they wouldn’t be fixed.

Windows XP users were probably more impacted by the decreasing hardware and software support for the applications they cared about.

I expect Windows 7’s “death” to be very similar to that still underway for Windows XP — which a few folks continue to use to this day.

Can you still upgrade from Windows 7 to 10 for free?

Will upgrading to Windows 10 delete my files?

Upgrading to Windows 10 need not delete your files. A true upgrade-in-place will simply upgrade the installed operating system and leave installed software and data alone. Of course, if there’s ever any question, just take a complete backup of the machine, and your data, prior to performing the update and you’ll be certain that your files will always be there.

Will upgrading to Windows 10 improve performance?

Yes, you can still use Windows 7 after its end-of-support date in 2020. There’s nothing preventing the operating system from running. The only thing that changed on that data was the availability of any further updates and fixes to the operating system.

Why am I still getting Windows 7 updates?

You’re probably not still getting Windows 7 updates, but instead are getting updates to other components or software installed on the machine. For example Microsoft Security Essentials and optionally Microsoft Office are updated through the same Windows Update utility that formerly kept Windows itself up-to-date. 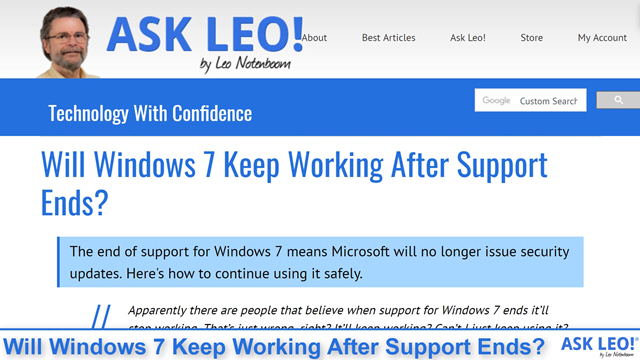 1: I believe Windows XP is in this state right now.

2: To the extent that I began this article by duplicating the Windows XP version.

46 comments on “Will Windows 7 Keep Working After Support Ends?”