If your keyboard won't work after a Windows Update, there's a lengthy list of things to try to get it back.
A couple of weeks after getting a new laptop, the manufacturer conducted an update and now the keyboard doesn’t work. I’ve tried uninstalling the device and rolling back the update, but no luck.

It can be very, very frustrating when the keyboard stops working, regardless of the reason. I mean, there’s only so much you can do with only a mouse.

I’ll walk you through the diagnostic steps I’d take with the hope that one of them will clear things up for you.

Restoring an image backup taken prior to the update would also be a quick solution to a software problem.

Having a keyboard fail due to an update is very rare, so my mind heads off in a different direction.

The very first thing I would do is beg/borrow/steal a USB keyboard, plug it in, and see if it works. If it does, it implies this is more likely to be a coincidental hardware failure rather than something software or update-related. If it does work, you’ll at least be able to type again, and know that your keyboard just failed and needs repair or replacement.

It’s also worth confirming the opposite: it might be a software issue. The easiest way I know to do that is to boot from something else and see if the keyboard suddenly starts working. Two options are to boot from:

The idea here is that if the keyboard works in either of these scenarios, then you’ll know your fundamental problem is software, not hardware, related.

If your keyboard works elsewhere — and particularly if the failure begins with a Windows Update — the keyboard driver is suspect.

First, use a technique to force Windows to re-load a driver. Right-click on the Start menu and click on Device Manager. Double-click on Keyboards to expand that node.

Click Uninstall device. When complete, reboot your computer. As part of the reboot process, Windows should reinstall a driver.

If that fails and the keyboard remains unresponsive, try the other option: Update driver, letting Windows search the internet for drivers as needed as well. You may need to reboot if a driver is installed.

If none of that helps, visit the support site for your computer’s manufacturer and locate any keyboard-related drivers they offer for your specific computer. If none are listed, the keyboard may be handled by drivers for the computer motherboard and other built-in devices. It’s also worth considering a BIOS/UEFI update if one is available.

This involves a slight chicken-and-egg problem: you have no keyboard, but you’ll need to type something. The approach to take is to enable the on-screen keyboard.

This will bring up the keyboard troubleshooter. Run that to see if Windows can resolve the problem.

In a case where the keyboard stopped working immediately after a Windows Update, the next approach to try would be to uninstall that update.

You can boot from a Windows setup disk, but if that’s not an option, in How I Fixed a Failed Windows 10 Update I describe the approach I used to get Windows to bring up various repair options. Regardless of how you get there, one of the options (also outlined in that article) is the ability to uninstall a recent update.

Uninstall the update that happened most recently and see if that resolves the issue. If it does, you can then configure your machine to delay further updates (also outlined in that article) so as to prevent this from happening again with the next check for updates.

If not, things get more involved.

The next steps are more significant, and involve seeing if fixing Windows will resolve the issue.

In turn, I would try, in turn:

If none of these work (and yet you can confirm that the keyboard works on other operating systems or computers, or even booting from the setup disk), I’m honestly at a loss.

Hopefully something along the path we’ve just tread will resolve the issue for you.

I didn’t mention it earlier because I’ve assumed you’re here because this wasn’t an option.

If you’d had an image backup taken some time prior to the Windows Update causing a problem, the fix would have been simple:

Basically, a backup is the biggest “undo” available. If a Windows Update causes you a problem — any problem — a restore from backup will “undo” it post-haste. 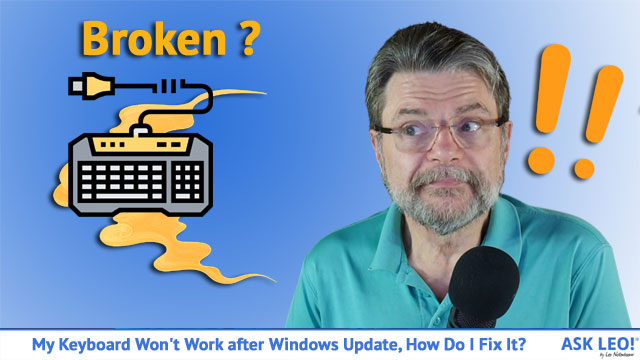 8 comments on “My Keyboard Won’t Work after Windows Update. How Do I Fix It?”