I am desperate and angry over the “trend” in graying fonts for the specious reason that it is more readable than black on white. It isn’t. Sometimes it is impossible to fill out a form because the font is so unreadable. Rather than take your time reiterating my lament, may I ask whether there is any recourse. If I thought there was any chance of getting a response, I’d ask Bill Gates himself.

Well, to start with, Bill wouldn’t be any help at all. He’s not been involved in the day-to-day workings of Windows for many years. Besides, this isn’t a Windows problem, it’s a website-design problem.

And it is a problem. It’s one I hear frequently.

Unfortunately, the remedies are either extreme or non-existent.

Too many shades of gray

Black is out. Gray is in. At least when it comes to text in website design, it appears.

And, of course, there’s no agreed-upon definition what color “gray” should be. Website and theme designers tend to pick something that appeals to them and run with it. The result is that you might have a light gray, a dark gray, a darker gray, or something that is so dark gray that for most people it’s nearly indistinguishable from black.

For most people. And therein lies the problem.

For a wide variety of reasons, ranging from display brightness and contrast settings to the individual characteristics of someone’s eyesight, it’s possible for what some would consider to be even a darkish gray to appear so light as to be unreadable to others.

For those others, only black will do.

Aside from fiddling with brightness and contrast settings (which may not even be present on some display hardware) there are precious few options.

There is no single approach to fixing this.

Well, other than convincing website designers to stop using gray or give visitors a way to make a choice. So far, this approach seems unsuccessful. Even Google’s been called on the carpet for it, and they’ve done nothing.

It’s even hard to call the available tools a “fix”. At best, they’re ugly work-arounds that might make the text readable — at a cost.

The extreme approach is to change Windows display to High Contrast.

In Windows 10, just click the Start button and type “contrast”, clicking on Turn high contrast on or off when it appears in the results. That’ll open the high contrast settings. Turn it on and your entire screen will change.

Depending on your circumstance, this may or may not actually help, as websites can explicitly specify colors that bypass the Windows settings. Similarly, images are not altered (as you can see in the Ask Leo! logo in the example above).

If you use Google Chrome, there’s a high contrast browser extension.

When installed and enabled, it controls the look of the web pages displayed in your browser.

Once again, it might not be pretty, but it works. In this case, of course, it’s limited to what’s displayed in your browser window.

You are not alone

Grey fonts are definitely a problem for many people.

And, as I indicated, the problem might not be evident to everyone. One thing you can do is let website owners know about your experience.1 While they might not address it based on a single complaint, if enough people let them know, perhaps, maybe, they’ll take heed.

Unless, it appears, they’re Google. 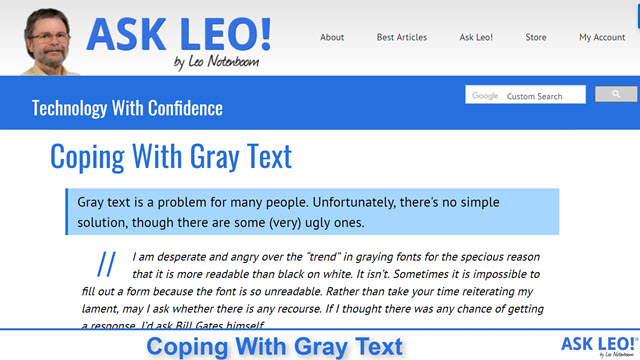 1: An early design of Ask Leo! that I’d commissioned used what I thought was black, but was actually a dark gray. It wasn’t until a reader pointed out the problem to me that I confirmed and fixed the issue. Everywhere, I hope. The complexity of website design is another reason issues like this are sometimes difficult to correct.

72 comments on “Coping with Gray Text”