Use Dropbox for almost real-time backup.

Using Dropbox to share files across machines is pretty common. You can also use Dropbox on only one machine as backup technology.

One of the problems with daily backups is they happen only once a day.

Don’t get me wrong: those daily backups are incredibly important. But what happens when you work on a document all day long, only to have it disappear before the daily backup happens?

Dropbox is designed to automatically copy files between machines. As a side effect, the files are also replicated to Dropbox’s online cloud storage. Leverage this for automatic backups by changing your default working folder to be a folder within Dropbox. Every time you save a file, you’ll back it up with Dropbox.

I’m going to use Dropbox as an example throughout this article, as it’s a ubiquitous and popular utility. If you prefer, however, there are alternatives, including SugarSync, Box.com, Spideroak, Google Drive, Microsoft OneDrive, and more.

The key feature these utilities provide is the automatic syncing of documents between multiple computers. If you create or save a document on machine “A”, it is automatically replicated or updated on machine “B” (and “C” and “D” and however many you are using with the utility).

However, you don’t need two (or more) machines for these utilities to have value. If you only work on one machine, the value comes from a by-product of the data synchronization. What looks to you and me like a direct copy from machine “A” to machine “B” is in fact a1:

Between those two steps, your material is backed up to the cloud. Even if there is no machine “B”, you still benefit, because every time you save a document, it’s automatically copied to or updated on the service’s cloud storage.

That sounds exactly like a backup to me. Every time you save the document to disk, it’s backed up.

Fill in your name and email and choose a strong password.

Naturally, you’ll have to agree to Dropbox’s terms of service. After clicking Create an account, you’ll be taken to a page to select which Dropbox plan you want. The free two-gigabyte plan is a fine place to start.3

After signing in to the app with the credentials you created above, it will ask if you want to turn on Dropbox’s own backup feature. For now, leave that off. I’ll discuss it in more detail below.

You can investigate the rest of the settings as you like, but the default installation is actually all you need. The important aspects of the newly installed Dropbox are:

Click on it to get the Dropbox status window.

Click on the folder icon to open Windows File Explorer on your Dropbox folder.

The folder that the Dropbox installer created in C:\Users\<username>\Dropbox is where all the magic happens.

And if you have more than one machine using Dropbox with this same account, then any files placed into this folder or updated on other machines are downloaded (synchronized) to this one.

But this is only true for documents within the Dropbox folder.

If you’re using Dropbox for automatic behind-the-scenes backup, we need to make one other change.

I’m going to use Microsoft Word for this example, but the concept is very simple: we need to change the default document folder in whatever application(s) you use regularly to be a folder within the Dropbox folder.

In Microsoft Word, under File, Options click on the Save sub-section:

Now whenever you create a new document in the default location,

that document is automatically replicated to your Dropbox account online.

In fact, every time you hit “Save” in Word, the document is uploaded to Dropbox. You can always download the most recent copy from the Dropbox web interface.

As I’ve said, the big selling point of Dropbox and utilities like it is that you can install it on multiple machines, and the files you place in your Dropbox folder will be synchronized across all of them.

Dropbox online also includes version history. Quoting the Dropbox site: “By default, Dropbox saves all deleted and previous versions of your files for 30 days.” Thus, if you’re using Dropbox as I’ve outlined here, and you make a number of changes, or accidentally delete a file in the Dropbox folder on your hard drive, not to worry: you can still use the Dropbox online interface to retrieve previous copies of the file.

At some point in the setup process, you likely saw this:

If you elected “Not now” during the initial setup, you can visit the options in the Dropbox app to set it up: click on the notification area icon, click on the icon in the upper-right containing your initials, click on Preferences, click on Backups, and then click on Set up.

Depending on the choices you make, you can have Dropbox also include your Desktop, Documents, and Downloads folder. Specifically, that will include:

in addition to Dropbox’s own folder

(In advanced settings, you can also include the “Music”, “Pictures”, and “Videos” folders if you like as well.)

Using this feature side-steps the need for changing the default save location in all your apps. Most will already default to “C:\Users\<username>\Documents”.

There are a few things to be aware of when turning this option on:

My recommendation, especially with a free account and only 2GB of Dropbox storage, is to leave the Dropbox feature turned off, and manage what gets backed up by carefully managing the folders and default save locations within Dropbox’s own “C:\Users\<username>\Dropbox” folder.

You can read more about the Dropbox backup feature here.

Using Dropbox for work in progress

My example has been about using Dropbox with Microsoft Word, assuming that’s where you do most of your work. In reality, any program that saves data to your computer can be set to save to your Dropbox folder by default.

I use Dropbox folders for my Word documents, text files, pictures … just about anything that’s a “work in progress”. (In reality, since I also use this technology on multiple machines, I keep much more in these folders, simply so they’re replicated across all my machines.)

Dropbox can be an important part of a healthy backup strategy.

How do I back up my Dropbox?

In one sense, Dropbox is backup in the cloud, but if it’s the only location in which your data is stored, then it’s not backed up. The easiest way to back up your Dropbox folder is to install it on a PC, making sure that all files and folders within Dropbox are downloaded locally to that machine, and then back up the PC using a backup program of some sort.

Why is Dropbox not a backup solution?

Dropbox isn’t really a true backup solution because it only makes copies of certain things: those files included in your Dropbox folder, and — if you enable the PC backup feature — those files in additional selected folders. Everything outside of those folders is not backed up. This includes Windows and your app installations, but may also include work that happens to be stored in other folders not included in Dropbox.

How do I back up my entire computer to Dropbox?

You don’t. A backup of an entire computer is huge, and thus impractical to back up to an online service like Dropbox. Such a backup could easily exceed the storage limits placed on your Dropbox account, and uploading your entire computer is typically too slow to be practical on most internet connections.

1: I’m not showing every step because these steps change from time to time. Right now, Dropbox appears to be prioritizing business accounts. Dropbox Basic is their free offering. If you land on one of the business plan pricing pages, look for and click on the option for “Personal plans”, which should include Basic.

2: For the very observant, this example image is actually on a different machine, hence the difference in user name: “lnote” versus “askle” in the Dropbox paths. 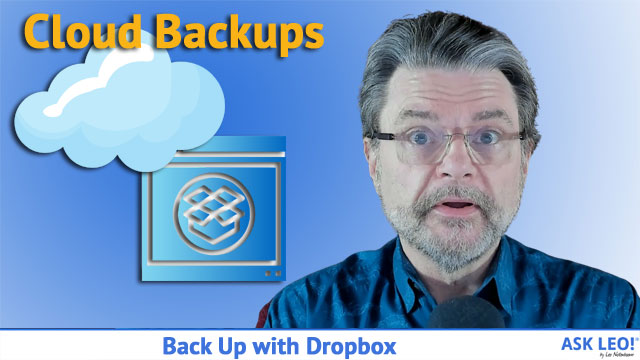 3: I’m aware that on local networks this functionality is often optimized as a direct copy from machine “A” to machine “B”, in addition to the copy from “A” to the cloud. That, and many other optimizations, are beside the point of our current discussion.
4: There are ways you can increase the free plan storage to nearly 20 gigabytes – mostly using their referral program. The amount of space included with the free plan is also one of the ways that competitors differentiate themselves from Dropbox.

35 comments on “Back Up with Dropbox”