The "Report Spam" and "Junk" buttons serve an important function in the war against spam. However, used improperly they can do more harm than good.

As I was dealing with my email the other day, a friend was with me. He nearly when ballistic when I used the “Report Spam” button to get rid of some email in my inbox. He said I was using it wrong. There’s a right and wrong way? Why shouldn’t I just use it?

Yes, there is most definitely a wrong way to use it. In fact, it’s so wrong that you could contribute to other people not being able to get their email

Reporting legitimate email as spam hurts the publisher as well as other people who actually want the email. Only report actual spam as spam, and use unsubscribe options on legitimate email. That does mean you need to know the difference, and know what you asked for.

The concept behind buttons like Junk in Outlook.com, Spam in Yahoo Mail, Gmail, and others is simple: let users decide what is and is not spam, and then use the information to build a better spam filter.

Spam is notoriously difficult to identify, other than “you know it when you see it.” As more and more people tell the services “This is spam,” the services then use characteristics of those messages to make their spam filters better.

The flaw in this scenario is the users.

As it turns out, they often do not know spam when they see it, and report legitimate mail as spam. If enough people do that, eventually legitimate mail starts getting blocked by spam filters.

When that happens, you and others don’t get the email you asked for because others reported it as spam.

Let’s say I’m a newsletter publisher (which, coincidentally, I am). In order to get my newsletter, you have to

That’s referred to as “double-opt-in” and is the industry-standard way of making sure that you really mean it when you sign up for an email newsletter.

Now you receive my newsletter. Maybe you don’t like it. Maybe it’s not what you expected. Either way, you explicitly asked to receive it and confirmed that you wanted it. By definition, it is not spam; spam is email you didn’t ask for.

If you want to stop receiving this email, then hit the Unsubscribe link. Because you asked for this email and confirmed that you wanted it, the right thing to do is to follow the directions to unsubscribe from it.

So, you’re on a mailing list you no longer want to be on. What do you do? How Do I Get Off Email Lists I Don’t Want to be On?

When “report as spam” is considered harmful

If you use the “Report as spam” button on email you asked for, you harm both the publisher and the other subscribers to that newsletter.

How? You’ve told the email service that it’s spam when it is not. The service may eventually start blocking that newsletter, not only from you but from other recipients using the same service.

I’ve run across several newsletters having delivery issues with some of the larger mail systems because people hit “Report as spam” instead of unsubscribing as they should have. I know of at least one that has stopped supporting recipients of one mail service entirely, and I know of another who stopped accepting subscribers from Hotmail and Yahoo because of these types of deliverability issues.

“Report as spam” is not a substitute for “unsubscribe.”

If you asked for the mail, then use the proper steps to unsubscribe. If you know you did not, if you know that what you’re looking at is truly spam — unsolicited email — then by all means, report it as spam.

When “unsubscribe” is considered harmful

What confuses the issue, of course, is that you should never click on the unsubscribe link in spam. That’s just a recipe to get you more spam.

So, how do you know the difference?

On the other hand, if you didn’t ask for it, never heard of it, and have no idea why you’re getting it — then it’s probably spam.

On behalf of all the legitimate newsletter publishers out there and their subscribers, please know the difference and act accordingly.

What happens when you report email that is spam as not spam?

When you report an email message erroneously classified as spam as NOT spam, the email system typically takes the characteristics of that email to adjust its internal definitions of what spam looks like. They may also unblock the IP address and/or email address from which the spam originates, or adjust the sending reputation accordingly so as to decrease the probability of future messages being classified as spam.

Does reporting spam do anything?

Yes. Reporting spam causes the email system to use the characteristics of the reported message to adjust its internal definitions of what spam looks like. It may also block the IP address and/or email address from which the spam originates, or adjust the sending reputation of the email address so as to increase the probability of future messages from the same origin and/or having similar characteristics being classified as spam.

Is it better to block or delete spam?

Generally you should mark spam as spam, or just delete it. Blocking spam is generally ineffective because spammers rarely send their messages from the same place. They often use spoofed “From:” addresses, so blocking the sender is ineffective, and they often send from networks of thousands of compromised computers in a bot net, meaning that blocking the IP address of the one that happened to send the message won’t prevent it from being sent by others.

Where do reported “not spam” emails go?

When you report a message as “not spam”, the message should be moved from the spam folder back to your inbox. Depending on your email system and the state of the message, it may or may not be changed to read or unread.

Can you stop junk mail from being delivered?

There is no practical way to stop junk email from being delivered. The most pragmatic solution is to train your email service’s spam filter by marking spam as spam, so similar messages will be delivered automatically into your spam folder rather than your inbox. Similarly, if you find non-spam inside your spam folder, mark it as “not spam” so as to increase the likelihood it’ll be delivered to your inbox in the future. 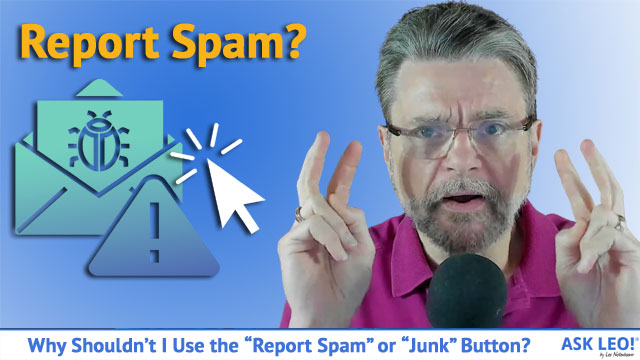