OneDrive tries to make it easy to back up important folders, but at the cost of making some things very confusing.
I haven’t put anything in it yet, and I’m told my OneDrive is full and I need to buy more storage. What the heck?

No, really, I’m willing to bet it’s because of a feature that you may have enabled (or may have been enabled by default).

It’s a feature with good intent; it backs up a lot of things to OneDrive. It also confuses the heck out of a lot of users.

The “folder backup” feature creates duplicate Document, Desktop, and Pictures folder within your OneDrive folder and copies the original folder contents into them. If you had more than five gigabytes of files to begin with, this could immediately exceed your free OneDrive capacity. The simplest solution is to turn the feature off and make sure to back up your entire machine some other way — as you should already be doing.

Backing up is a good thing, and I talk about it often. In my opinion, however, the OneDrive “folder backup” feature causes more confusion and problems than it’s worth.

At some point when you set up OneDrive or visit OneDrive Settings, you may encounter the “folder backup” feature.

It defaults to being on. Click Start backup and OneDrive will start backing up the folders listed.

But what does that mean?

You don’t absolutely need OneDrive, it’s true — but using it can be very, very helpful. Do I Need OneDrive? has more.

Each of those folders is normally a folder in your Users folder.1 On my example machine, those three folders are on my C: drive:

All are alongside your OneDrive folder:

When you enable OneDrive folder backup, the following happens to each of those three folders:

This is all good, right?

There are two problems: confusion and size.

Regardless of what’s moved, you now have two “Documents” (and “Pictures” and “Desktop) folders:

The intent is that the first one, which is likely to be empty now, will no longer be used, in favor of the OneDrive alternative.

Sadly, not all programs recognize the new location. Depending on the software you use, you may end up with some documents in C:\Users\<username>\Documents (the old location, not backed up by OneDrive) and C:\Users\<username>\OneDrive\Documents (the new location). Windows File Explorer will make it difficult to see the first, since all of its shortcuts have been updated to point to the second.

Confusion is not uncommon. (Hint: if you’ve “lost” a document, look in both folders.)

But it gets worse.

The default capacity of OneDrive for free accounts is five gigabytes.

What if you have more than five gigabytes of data in your Documents, Desktop, and Pictures folders, before you turn on OneDrive folder backup?

Your OneDrive will be full right from the start.

Of course, you’ll be offered the opportunity to spend money to get more space.

There are cheaper solutions.

One way to retain backup functionality but get yourself under the limit is to move files out of the OneDrive folder. For example, if you have a lot of pictures in your Pictures folder, perhaps move them to a different folder that is not in the OneDrive folder.

This is a reasonable solution if you’re adept at files and folder management and can keep track of where things are stored.

This also requires you to make sure you have the other location backed up some other way. (If you’re doing full image backups regularly, you will. More on that in a moment.)

Opt out of specific folders

You have the ability to de-select folders to be backed up. The blue checkmarks in the upper right of each folder’s box (as they are when you first set it up) could be unchecked.

If you return to “Manage folder backup” (via OneDrive settings, Backup, Manage backup), you’ll see you have the option to “Stop backup” for each of the folders.

In the example above, I’ve clicked Stop backup on the Pictures folder and unchecked the blue checkmark that appeared when I did so. (The blue checkmark doesn’t shown above because it disappeared as soon as I checked it.)

This removes the Pictures folder from the OneDrive backup (but not from OneDrive).

Now OneDrive is no longer backing up the Pictures folder — but this doesn’t move files back, nor does it remove the C:\Users\<username>\OneDrive\Pictures folder. You’ll still have too much in OneDrive.

You need to manually:

This will allow you to continue using OneDrive to back up your Desktop and Documents folders, but not your Pictures folder.

Of course, you can select whichever of those folders you want to include (or not) in the OneDrive folder backup process.

I prefer something else.

I much prefer not to use this feature at all.

When offered, I de-select all three folders.

I click on each folder to UNselect it. I never let the backup process begin. With all three folders unchecked, you can’t even click on Start backup. Just close the window by clicking the “x” instead.

What we’re doing here is really just a specific case of freeing up space in OneDrive without losing files along the way. See: How Do I Delete Files From OneDrive, but Not My Computer?

If you’re turning this feature off after it’s already been run, remember to do this for each of the three folders previously being backed up.

Note that this does not affect the rest of your OneDrive — that will still be available online, and will be automatically synchronized. This only affects the three folders listed: Desktop, Documents, and Pictures.

The next step is the most important of all.

Back up some other way

I get what OneDrive is attempting to do: make it easy to back up the folders most people place their data in. But as we’ve seen, it comes at a cost.

Yet backing up is important.

So back up a different way.

In fact, you should already be doing this. My recommendation is a complete full image backup of your machine on a regular schedule. If you do that, all the files on your computer — whether they’re within OneDrive or not — will be safely backed up.

With a lot less confusion.

What do I do when my OneDrive is full?

When your OneDrive is full, you have two options: purchase more storage to make your OneDrive larger, or move files out of OneDrive. You can delete any files you no longer need from OneDrive, but if there are files you want to keep, you’ll need to move them to folders on your PC that are not within the OneDrive folder.

Does it matter if OneDrive is full?

Depending on how you use it, it may not matter if your OneDrive is full — but it usually does. If you don’t actually use OneDrive but just happen to have it running, then whether or not files are successfully uploaded to OneDrive online may not matter to you. On the other hand, if you’re counting on OneDrive for backup or file sharing to other computers or users, then you definitely want to correct the problem by storing some files elsewhere or paying for more storage.

Can anyone see my files on OneDrive?

No. By default, no one other than you can see your files on OneDrive. The only exception is OneDrive files or folders that you’ve explicitly shared with other users or made public to the world. Since this requires you to take action, you’ll know if you’ve done it or not. 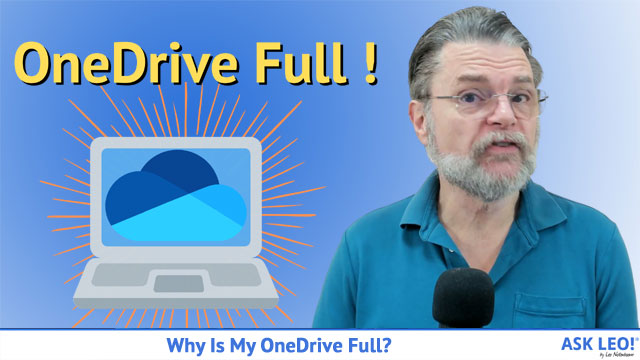 1: I’ll use <username> here to represent your login username. In my case, for example, the folder is actually C:\Users\lnote\Desktop, because “lnote” is my sign-in username on this machine.

34 comments on “Why Is My OneDrive Full?”