Why you might use your mobile data plan for security.

Mobile broadband is a popular internet connection alternative. As with any connection, it's important to understand the security ramifications and tradeoffs.
I recently upgraded my mobile phone and can now connect it to my laptop to get internet access almost anywhere. The salesperson said it will be more secure to use, even in places that offer Wi-Fi. Is it more secure?

By and large, data connectivity through the cellular network is more secure than open Wi-Fi.

Mobile data connections are generally more secure than using someone else’s open Wi-Fi or other internet connection. Mobile data is more difficult to intercept, whereas open Wi-Fi makes for an easy target. Mobile connections make a good alternative to third-party connections if there’s any security concern at all.

The risks of open Wi-Fi

From a security point of view, the difference is this: anyone with a Wi-Fi-enabled computer has what they need to be a hacker.

There’s no special equipment needed, and the software required is free, open-source, and easily available for download. It’s even lawful, as there are many legitimate uses for what’s called “packet sniffing” software.

The result is that anyone can use a laptop within range of an open Wi-Fi hotspot and sniff (monitor) the data being transmitted on that hotspot.

It’s easy. That’s why I have an article on the ways to use an open Wi-Fi hotspot safely. And, indeed, one of the ways to be safe is to not use it at all, and use mobile data instead.

The risks of mobile

With mobile systems such as your phone, the situation isn’t nearly as simple. Here, hackers need special equipment to start sniffing, and need to be able to decrypt the data as it is encrypted.

Neither of those are particularly difficult obstacles. I’m sure the hardware needed is available on the internet (isn’t everything?). As it turns out, cell-phone encryption isn’t particularly secure either, having been developed many years ago, when mobile phones didn’t have the computational horsepower necessary for today’s more secure alternatives.

In other words, it takes some extra steps and expenses to start hacking the mobile network, but it’s possible.

However, given the ubiquity of open Wi-Fi, the fact you don’t need special equipment, and the general lack of security employed by most people using hotspots, the open Wi-Fi scenario is a much bigger, easier target to go after.

What if they’re after ME?

Now if you specifically are being targeted — say as part of some corporate espionage — perhaps it’s worth it for the hacker to invest in that additional technology. In that case, you’re better off with a wired connection, avoiding the airwaves completely. (Though even then, depending on how lucrative a target you are, you could still be at risk.)

But if you’re an average user, a mobile device coupled with a firewall and generally good internet behavior gives you all the security you typically need.

There are several trade-offs between mobile and Wi-Fi to be aware of.

Finally, lest you think that plugging into a wall socket for hardwired ethernet connectivity is the safest of all, let me remind you that wired connections can be as dangerous as Wi-Fi. Often overlooked, wired connections (particularly in public venues such as hotels) share almost all the risks of open Wi-Fi hotspots.

Use the connection type that gives you the security you need. If you can trust the Wi-Fi connection, great! Otherwise, if there’s any question at all, consider using your data plan.

Mobile versus Wi-Fi is just one aspect of keeping yourself safe and secure online. Subscribe to Confident Computing for more! Less frustration and more confidence, solutions, answers, and tips in your inbox every week. 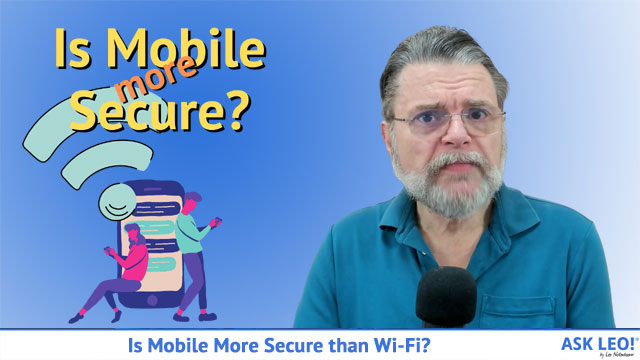 6 comments on “Is Mobile More Secure than Wi-Fi?”