Backing up your computer's data is critical. What backup program should you use? There are many, but pragmatically, the best is whatever you'll actually use.

Backing up is kind of like eating healthier: everyone knows we should, and few of us actually do. Much like the heart attack victim who no longer binges on french fries, when it comes to backing up, the most religious are those who’ve been bitten hard by a failure in their past.

Asking what backup program to use is very much like asking, “What’s the best exercise program?”

The best program for exercise — or backup — is whichever one you’ll actually do. In order to choose what’s going to work best for you, there are several questions to ask.

What backup program is best?

There are many questions to consider, but most important is selecting a backup strategy that will work for you. If you’re not sure, get an external drive, a copy of Macrium Reflect or EaseUS Todo, and configure them to take image backups monthly and incremental backups daily. Consider adding online backups of some sort to the mix, and you’ll be well protected.

Do I want to put a lot of thought into this?

If this isn’t something you want to spend some time learning about — and to be honest, most people don’t — then prepare to spend a little more money for some additional disk space, and get a good dedicated backup program.

In addition to a drive, you’ll need a backup program. Many external drives come with backup software of some sort; that’s sometimes a good place to start. Unfortunately, while the drive may be good, you don’t always know the quality of the free software included with it.

If, as I recommend, you elect to get backup software, there are many good choices. I personally use and recommend Macrium Reflect or EaseUS Todo for most home users. (There are both paid and free versions of each.) Starting with Windows 7 (though apparently being de-emphasized in later versions of  Windows 10), the backup program included with Windows appears also worthy of consideration.1

Am I comfortable re-installing my system?

This is a comfort-versus-space tradeoff.

If you’re okay with re-installing your system from scratch, meaning your operating system as well as all applications and customizations, and you can clearly identify what does and doesn’t need to be saved, you can save a lot of disk space by backing up only your data. This requires a great deal of diligence on your part, because anything you don’t specify to be backed up will be lost in the case of a catastrophic failure.

Either way, you need to make sure to use a technique — either home-brewed or in the form of a backup or automated copy program — to make sure this happens automatically. Relying on your memory to back up isn’t the best choice.

Is there another machine nearby?

You might not have to go out of your way to get additional hardware for backup purposes.

Hard disks are so large these days that simply having another machine on your local network with sufficient free space can be a quick and easy solution. Many backup programs allow you to back up across a network. Having two machines back each other up is a quick way to ensure that if either has a problem, your data is safe on the other.

This does mean you’ll have to set up your local network and enable file sharing on it — something that isn’t always the easiest to accomplish or maintain.

How valuable is what you’re doing?

What if your building, including your machines and all of their backups, was lost in a fire?

If the potential data loss just sent a shiver down your spine, you should consider offsite storage for your backups. That could mean periodically taking an external disk with your backups on it to some other location, or, if the sizes are small enough, backing up across the network to a server not in your home.

When my wife had a retail store, I had an external drive for backups at her store and another in our home, and would periodically swap the two. Each location then had “offsite” backup at the other.

In recent years, another approach might be even easier….

If the amount of data you’re backing up is manageable and your internet connection is relatively fast, an online backup system may be worth considering.

These programs back up your critical files to secure servers on the internet, giving you data and offsite backup at the same time. In addition, some services allow you to access your backed-up files from any machine connected to the internet. This approach is impractical for large backups (such as full image or complete system backups) due to upload speed and storage size limitations.

You might also consider services like Dropbox, OneDrive, Google Drive, and others. Data placed in folders managed by these services is automatically backed up to their servers (and to any other computers you install the software on, should you choose).

How important is it that you be able to recover a file from a specific day, and not a day before or after? If you simply back up all your files on top of previous versions, you’ll only have the most recent version. In many cases, that’s enough. In some cases, it’s not; one example might be needing to recover an older version of a file that became corrupt at some point.

What resources should I back up?

Have you thought about all your computers? All the drives therein? How about external hard drives you’re not using for backup? Do you have a website? Do you have a backup of it? What would happen if your ISP “lost” it? (It’s happened.) If you’re a small business, do you have databases that need backing up? Office machines belonging to everyone but no one?

My answers and one possible approach

These questions can seem overwhelming. Actually deciding what to do can be agonizing.

But I really, really want you to take action and ensure that your precious data is backed up somehow, somewhere. I hear often from people who have lost too much. It’s downright heartbreaking at times.

So here’s one possible approach that should work well for a large number of home and small business users.

I’ll call this an 80% solution: something that will work well for most people. It won’t be exactly right for some, but it’s a start.

The bottom line for backing up is simple: just do it. Understand what you have and what you’re willing to invest in, but do something… 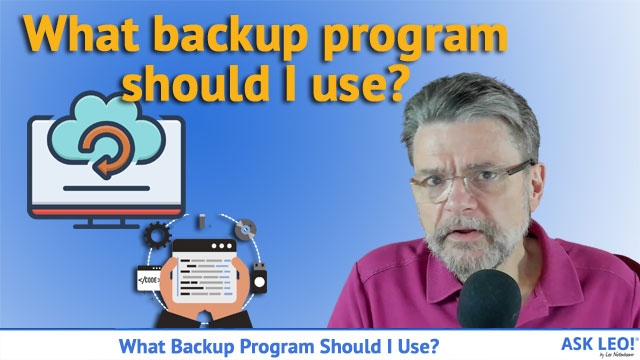 1: And, in fact, I’ve written books on using Macrium Reflect and EaseUS Todo, as well as Backing Up in Windows 10. More at the Ask Leo! Store.

2: I have various articles with basic details on each, simply search Ask Leo! for the tool you want to try.

140 comments on “What Backup Program Should I Use?”