Three practical steps to make sure the safety net will work.

It's a good idea to test backups before disaster strikes. Unfortunately, a complete test can be risky. I'll look at some alternatives.

I back up my data using Windows, but it’s not maybe as retrievable as I would like it to be. I don’t know exactly how to test backups to know whether they’re really there. It says they are, but are they? I’ve had to use the system image to restore function once when my computer became infected with something. I basically just transferred the system image back to my C drive and it solved all my problems. I must say I’m thankful to you for strongly encouraging everyone to do backups. I can’t tell you how many friends and family have lost stuff – everything – because of not backing up. Pictures, important data. Loss of pictures seems to be the most heartbreaking.

Yeah, I hear those heartbreaking stories all the time, and they are indeed one reason I talk so much about backing up.

Your concerns about backups are common, as is the desire to test.

Let’s review how you can gain some confidence that your backup will be successful when you need it.

A full restore is the ultimate test

The ultimate way to test backups, of course, is exactly what you ended up doing: performing a full restore of an image backup.

A full restore is the most important to have work, since it’s what can save you from almost any problem. Malware infection? Restore to an image created before the infection, and it’s gone. Disk failure? Replace the drive, restore the most recent image, and you’re up and working again.

The problem for testing backups is that a full restore is really, really risky.

By definition, a full restore is a destructive operation. It erases what’s currently on the hard drive and replaces it with the contents of the backup image. If the restore fails part way through, you’re worse off than when you began. You found out your backup didn’t work, but you trashed what was on the hard drive in the process.

The very restore you took to be able to fix the failure is the restore your test just discovered doesn’t work!

Here’s my approach to testing backups.

1. Use the rescue media, prepare for a restore, and stop

Create the rescue media — sometimes called an “emergency disk” — from your backup program. This is the CD, DVD, or USB stick you would boot from in order to perform that full restore. Then boot from it.

Getting this to work is important, because booting from something other than your hard drive can be complicated, particularly in newer machines.

Once the software from the rescue media is running, make sure it can see the drive that contains your backup images.

Then follow the steps to do an image restore, stopping at the very last step before the restore would begin. This verifies that your recovery disk works and the backup program can access what’s necessary to perform the restore.

That’s about as far as you can go without actually performing the restore, but it’s tested quite a bit.

Most backup programs allow you to extract individual files from your full system backup image. Doing so is another way to test backups.

I recommend restoring a single file.

Exactly how to do this varies depending on the backup program you’re running, but the scenario is the same: delete or rename an unimportant file on your hard disk and go through the steps for your backup program to restore the file from a backup.

You shouldn’t need to boot from the rescue media. This is something you should be able to do by running the backup software and using it to extract individual files from wherever your backups are stored.

If you succeed, great! You now have confidence the files contained in that backup image can be restored in the event of a disaster.

For example, in my Maximum Reflect course, I outline how to mount a backup image as a virtual hard drive. You can do this with Windows backup and other backup programs as well. You can then examine the contents of the image to make sure it contains what you expect.

Poke around in the backed-up Windows folders to make sure all of Windows is there. Browse through the folders that contain your data to ensure the same. Look around inside that image to ensure it has what you might need should the worst happen.

There is no 100% guarantee that your backup will work when you need it, but these tests can give you confidence that common issues that often get in the way of an effective backup won’t get in the way for you.

There’s one more way to test backups. It involves more work and some additional cost, but it’ll prove beyond a doubt that your backups work.

If this works, you can leave the new hard drive in your machine and keep the old as a spare.

If it fails, you simply put the old hard drive back in your machine, and move on to diagnose how your backup failed and why. 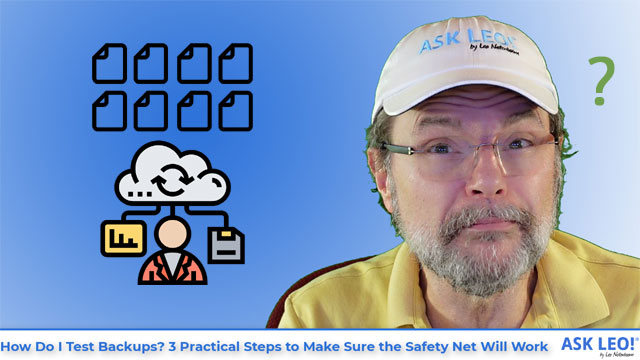