Save space by backing up only certain things.

I have a mental ‘block’ on backing up which unnerves my approach to it. I have managed one full backup (32gb) on an external hard drive. I have just read your article on maintenance but do not understand what is meant by “incremental backup”. Does it simply ‘update’ or overwrite the existing backup or does it create something else that only contains whatever is new since the previous backup? I think the latter is what I would prefer.

What you prefer is, indeed, what it is.

There are three different types of backups: full, incremental, and differential. It’s important to understand which is which and how they’re used to make sure you’re backing up appropriately, but not using excessive disk space.

A full backup is a backup of everything.

A full backup stands alone. It’s a snapshot of your machine at a point in time. You can then restore the entire full backup to return your machine to the state it was in when it was taken. Since it has everything, you can also use it to restore individual files or folders as needed.

Pro: a full backup stands alone. It has everything. There’s no guessing about what should or should not be backed up.

Con: a full backup can be big, sometimes very big. It has everything.

An incremental backup includes only those things that changed since the previous backup.

Most files on your machine rarely change. That means an incremental backup is much smaller. For example, on my desktop machine, a full backup is roughly 300 gigabytes in size. Incremental backups range between 4 and 10 gigabytes, depending on how much happened on the machine that day.

Most backup software makes this easy. Typically, you point the software at the collection of backups — both full and incremental — and tell it, “I want to restore to this date”, and the complexity is managed for you.

Con: the baseline full backup, plus all the incremental backups, must be preserved and available in order to restore.

Pro: You can restore from only two backups: the initial full one plus that day’s differential.

Con: Differentials grow in size from day to day. Differential backups end up being larger than incremental backups, but not as large as taking a full backup every day.

Let’s compare using these three methods to back up a “C:” drive. This table shows what each type of backup would include on a series of successive days.

Now let’s look at restoring data. This table shows which backups must be available in order to restore to a specific day.

What type of backup to use

The choice of which type of backup to use can be daunting. Daily full backups seem the simplest, but you’ll quickly find yourself running out of disk space. Incrementals seem like a great alternative, but you may find yourself in backup-management hell as you try to keep track of which files you need to keep for how long. Differentials seem like an interesting idea, but are they really all that different than incrementals?

Why not just do a nightly full backup and allow it to overwrite the previous day’s backup?

You could. The problem is you’re assuming you’ll always detect a problem or a missing file within a day, before the backup containing it is overwritten.

Experience shows that things rarely work that cleanly. It’s not at all uncommon to wonder days, or even weeks, later, “Where did that file go?” Being able to search your daily backups for a file can be a real lifesaver.

Looking at it another way

Since I know that these concepts are often confusing and sometimes difficult to grasp, I’d like to also point you to this article: What Backup Type Do I Want: Full, Incremental, or Differential? It covers essentially the same topic using a slightly different visual representation.

Above all, back up!

Don’t let all this intimidate you into not backing up at all! Most backup programs make these choices fairly easy and do a good job of managing files for you and completely automating the process.

Computers are good at that. 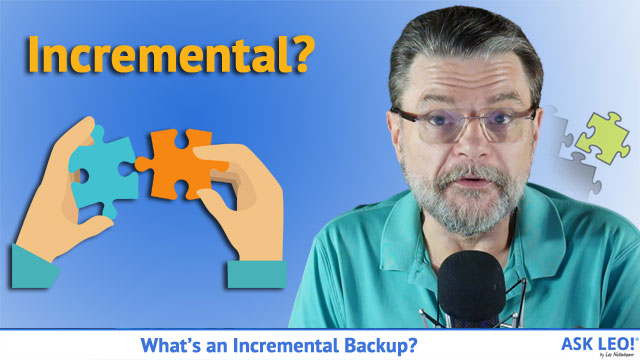 1: As an alternative, you might consider waiting a month before deleting the prior month’s incrementals. That way, you’ll always be able to go back between 30 and 60 days, depending on where you are in the current month’s backup cycle.

48 comments on “What’s an Incremental Backup?”