There is no “exactly” when it comes to these terms.

This is yet another case of technology using terms inconsistently with confusion as a result.

I’ll review the most common things you might find on discs by those names and which terms are most likely to apply.

The terms rescue, recovery, repair, and emergency media are used inconsistently in the industry. They can refer to backup restore media, media containing diagnostic and repair tools, media containing operating system installation files, and more. Rather than relying on the names, look at what the media provides and choose what you need based on that.

First, let’s talk about disc. It specifically means optical discs like CDs, DVDs, and the like. These were the go-to media for these types of things for many years. They’re still one of the more common ways that software is distributed if it’s distributed physically at all.

Many rescue/recovery/emergency “discs” are now really USB thumb drives. When you make these items on your computer, you may choose to write them to a thumb drive rather than burn a disc. You may not even have an optical disc drive anymore, making USB thumb drives the only option.

The thing that these two forms of media share is that a) you can write software to them, and b) you can boot your computer from them.

I’ll refer to them as “media” from here, but the discussion applies equally whether you’re using optical discs or USB thumb drives. Just to create more confusion, you may also see the generic term “drive” used for these media.

Windows lets you create what it calls a recovery drive.

Quoting the information from the Windows process:

Even if your PC can’t start, you can use a recovery drive to reset it or troubleshoot problems. If you back up system files to this drive, you’ll also be able to use it to reinstall Windows.

This implies a few things about a Windows recovery drive.

Normally all those things can be done from within Windows, so the recovery drive is used only if you’re unable to boot your machine normally. Clearly, it needs to be made before you need it. It’s unclear if making it on another machine would work, but my belief is that as long as the Windows edition (Home/Pro/etc.) was the same, it should work.

Rescue media could refer to a recovery drive, as it’s something you use to “rescue” your unbootable machine.

Macrium also includes the Windows Boot Menu with a separate partition as “rescue media” — effectively turning your computer into a dual-boot system, with the rescue media as one of the options. More commonly you’ll use a CD/DVD or USB flash drive.

Note that there are normally no extra tools. This media is all about using your backup program to “rescue” your system. You would use this to restore your system from a backup image.

Other programs have other names for this. Other people may use the term “rescue disc” to mean something else.

An emergency disc or drive could refer to any bootable media to be used in an emergency.

Once again, there are normally no extra tools. This is all about using your backup program in an emergency. You would use this when you need to restore your system from a backup image.

The problem here is that any media you might be able to boot from in an emergency to rescue, recover, or repair your system could be called emergency media, rescue media, recovery media, repair media, or any number of other terms.

Even your Windows Installation Media qualifies, as it contains Windows’ own diagnostic and repair tools in addition to the operating system itself.

So, if you can’t be sure what the term means, how do you know what you have?

If nothing else, consider making:

Be sure also to subscribe to Confident Computing! Less frustration and more confidence, solutions, answers, and tips in your inbox every week. 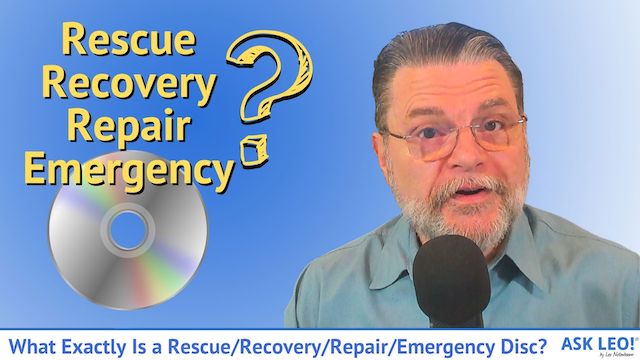 11 comments on “What Exactly Is a Rescue/Recovery/Repair/Emergency Disc?”