Let’s say you just bought your second computer. Perhaps you purchased a new laptop, tablet, new machine for your spouse, or another machine for yourself. Maybe you want to connect your smartphone via Wi-Fi when you’re at home, to reduce the usage of your mobile data plan. Perhaps you got a smart TV, light switch, video-streaming box, or Echo or Echo-like device.

Whatever the device, you want to connect it to the internet. It would also be nice to share things, like printers or extra disk space, among compatible devices.

You, my friend, need a LAN, or Local Area Network. There are lots of ways to set one up; I’ll review the basic setup for the most common case.

Already have a network, but not sure how to grow it? I’ll look at that, too.

First, let’s look at the two types of networks: wired and wireless.

The basis of your LAN will be ethernet. That word has a very specific technical meaning, but in common use, it’s simply the technology behind 99% of computer networks: a way of transmitting digital data.

Most computers now come equipped with an ethernet adapter – it’s the squarish hole that accepts what looks like an oversized North American modular phone jack.

Your broadband internet connection — cable, DSL, or something else — will come into your home or business as a wire that connects to a device typically called a modem (again, technically inaccurate, but it’s the common term). The modem’s job is to convert the broadband signal to ethernet.

That ethernet is then connected to a router. The router can be a separate device, or, as we’ll see momentarily, can be in the same box as the modem.

Routers control two important things. First, they “route” information from the internet to your LAN, and among the devices connected to it. Second, as a side effect of the way routers allow devices to share an internet connection, most also provide a very efficient firewall, protecting the devices on your LAN from many internet dangers.

Each of your devices need an ethernet adapter. Most already have them. In a traditional wired LAN, an ethernet cable connects each device to the router, and another connects the router to the modem. 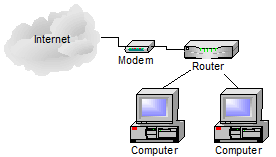 Important: Many ISPs provide a combined modem/router. That means the two separate devices — modem and router — are placed into a single box. Your internet goes in one connection, and you connect your devices to ethernet ports.

Wireless from the start

The most common approach is to use a wireless router to include wireless capabilities in your network from the start.

A wireless access point is a device that acts as a translator between wired ethernet signals and wireless Wi-Fi signals.

Adding wireless to an existing network

If you have an existing network using a wired-only router, and you want to expand that network to include wireless connections, you have two options:

Note: Getting an additional wireless router is not on that list. You do not need two routers. If you have a router you want to keep, you can simply add a wireless access point.

A wireless access point is simply a device you plug into your existing router as if it were another computer. It connects all your wireless devices to the router.

The number of internet-connected devices we deal with now is pretty amazing. Unfortunately, it’s pushing the limits of some of our network connectivity.

Wireless is easy. A typical wireless router (or router with a wireless access point) can easily handle dozens of devices connected via Wi-Fi.

Most home and small business routers — wired or wireless — come with a limited number of connections. Often there are exactly five connections: one for the internet (often labelled “WAN”, for Wide Area Network, or modem) and four for networked devices. Of course, today it’s not uncommon to have more than four wired devices in your home office. If all you have is a four-port router, adding that fifth device can be a problem.

The simple solution is a switch. 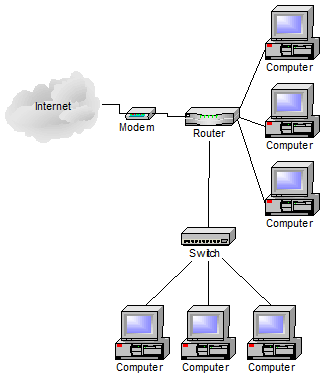 The best way to think of a switch2 is as wired network extender. All a switch does is make sure that data coming in on one port is sent to the correct other port to reach its intended destination. In the diagram above, one port of the switch is connected to one of the ports on the router. Additional computers are then connected to the switch.

Switches come in many sizes and often add more than a few ports. Common configurations for home or small business switches include eight- or 16-port switches.

Networking can get crazy

What I’ve described above are the common scenarios that apply to home and small business networks.

Those are the simple cases.

… right up to the internet itself, which, when you get right down to it, is built of not much more than the building blocks we’ve talked about here. Oh, they might be bigger, faster, and significantly more expensive, but the concepts are essentially the same.

But if all you want to do is share an internet connection with a few devices at home, your setup can remain pretty simple.

Setting up a Home Network

2: Don’t let the name “switch” fool you. This isn’t like a light switch, turning things on and off. A networking switch is more like a railroad switch, sending traffic down the appropriate track.

347 comments on “How Should I Set Up My Home Network?”