It’s usually the other way around.

It does sound strange that a wireless connection could be faster than ethernet. We'll start by looking at the obvious: the cable connection itself.
Hi, Leo. Is it normal for WiFi to be consistently faster by more than 50% than Ethernet for my LG TV? All my other devices on my LAN favor the Ethernet speed. If it’s normal for certain devices (for example, this LG TV), why? Because it doesn’t agree with the norm?

In general, wired connections like ethernet are almost always faster than wireless.

What you’re seeing is a tad unusual. I have some ideas.

Common Wi-Fi protocols have maximum speeds ranging from 54 to 600 megabits per second. However, maximum speeds are rarely realized. Why is My Wi-Fi Speed Slower than Ethernet? Why You Really Want that Wired Connection discusses the many reasons, but the single most important is wireless signal strength, which can be easily impacted by both distance and interference.

Ethernet speeds are most commonly 100 or 1000 megabits per second, and don’t suffer from the same problems that wireless connections do.

One thing to check right away is whether your ethernet equipment — routers, switches, hubs, and even the devices themselves — actually support the common speeds I’ve listed: 100mbps or higher.

In days gone by, it was common for the maximum ethernet speed to be 10 mbps. If you still have one of these old pieces of equipment lying around, it could be throttling your speed.1

Ten mbps is well below the speeds today’s Wi-Fi is capable of.

Cables can contribute to this scenario.

While we think of cables as either working or not, a low-quality or damaged cable can work, but still adversely affect network speed.

It’s an easy test and fix. Swap out the cables for newer, high-quality ones, and see if it helps.

It could be legit!

There’s always the possibility that the stars are aligning and your Wi-Fi connection really is faster than your ethernet. For example:

The net result might be your Wi-Fi out-performing your wired ethernet.

In my experience, however, my money is on the cable.

Wi-Fi can replace ethernet in many situations, particularly those where cabling issues make ethernet difficult or impossible, and yet distances are such that wireless technology can work. More generally Wi-Fi is unlikely to replace cabled ethernet connections as the later are typically faster and more reliable.

Wifi vs ethernet for streaming?

Wi-Fi can be used for video streaming and gameplay as long as it proves fast enough. Many wireless connections can be fast enough to meet the requirements for streaming, but it’s also very easy for that not to be the case, or for transient interference problems to disrupt the streams. Cabled ethernet is preferred as faster and more stable when it’s available.

Does an ethernet cable slow down wifi for others?

Using an ethernet cable will not slow down Wi-Fi connections on the same network. In fact, when replacing a wireless connection with a cabled connection it’s possible that with fewer devices competing for wireless bandwidth those remaining could even speed up. The only scenario where things might slow down is at the common choke point: the router and/or internet connection. If any connection — wired or wireless — overwhelms the device or connection other connections could slow down as a result. 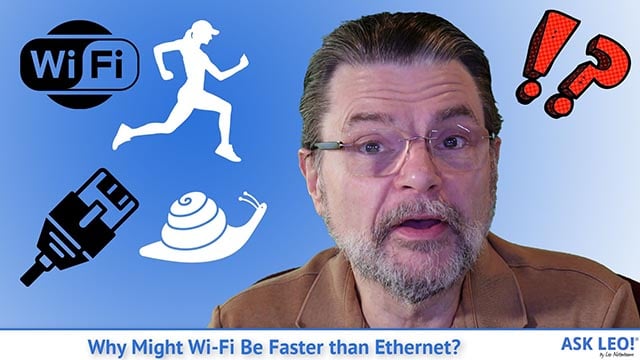 1: It’s extremely rare, but it’s also possible that specific devices might be configured to use a slower speed than they are capable of. A computer with a 100 mbps network adapter can be configured to limit its speed to 10mbps. As I said, though, this is rare.

16 comments on “Why Might Wi-Fi Be Faster than Ethernet?”