Why you really want a wired connection.

Wired speeds are almost always faster than wireless. I'll review why and what you can do. Spoiler: "what you can do" usually involves a cable.
I used one of those “what is my internet speed” sites. My wired laptop got ~260 Mbps, while the Wi-Fi laptops got around 80. The Wi-Fi laptops are 25 ft and two walls away from the router. In actual practice, Wi-Fi downloads are more than 20 times slower than wired. Why? The connect window shows more than 28 WAPs in my neighborhood, 5 are HP printers. I suspect interference is a problem. Is it?

But, honestly, I think there’s something else going on here. I think your expectations might be incorrect.

The maximum speeds of many Wi-Fi protocols are slower than speeds offered by common ethernet connections. Even if higher, Wi-Fi speeds are significantly more affected by interference, distance, and signal strength, resulting in slower transfer speeds. If possible, wired connections should be used where speed is critical.

The various Wi-Fi protocols each have theoretical maximum speeds.1

Wired ethernet in the home generally supports one of three maximum speeds:

But what about the others?

To get the maximum speed out of your ethernet connection, you need equipment that supports it at both ends of each cable, and good cables. Even at the maximum specified cable length (100 meters), that’s all you need to get close to the maximum speed. If speeds aren’t close to, say, 80% or so of maximum, it’s often because the software at either end is busy, can’t keep up, or there’s just not that much data to be transmitted that quickly.

Like wired, you need compatible equipment at both ends of the connection. For Wi-Fi, that generally means a protocol will be automatically selected based on the capabilities of both endpoints and the quality of the wireless signal.

Signal quality is the biggest variable. If you have several walls to “go through”, or the end points are far away from one another, the signal will be weaker or more difficult for the devices to understand. The result is that they may choose a slower speed to get a more reliable connection. It’ll work, but it’ll be slower.

In other words, conditions must be ideal to achieve Wi-Fi’s maximum speeds, and conditions are rarely ideal.

Depending on the protocol, even a small degradation in signal can result in a large decrease in speed.

Being slow at high speed

One confusing situation is when you are connected at a high speed — wired or wireless — but your data throughput is still slower than expected.

Both wired and wireless protocols confirm that data sent has been received correctly. If not, it’s sent again. While you might expect that your data might be sent once and arrive properly, if there’s interference along the way it could take several “retries” to get the data to its destination. A single retry means it takes twice as long, meaning the effective speed is half of what you expect. If it happens frequently enough, the impact can be significant.

Wireless protocols are more sensitive to interference, mostly because there are more sources of interference. A wired cable is generally interference-free, unless it has a defect of some sort. (This is one reason why replacing a cable is on many diagnostic lists when troubleshooting various problems.)

I also have to point out that when measuring your internet speed, you’ll always be limited to the speed provided by your ISP, regardless of how fast your equipment is.

For example, it’s great for all your wired equipment to support gigabit ethernet. It’ll make for faster machine-to-machine transfers. But if your internet service is 100 megabits — one tenth of gigabit — it’s that slower speed you’ll experience on any internet speed test. If you want faster internet, you may need to talk to your ISP to see if a faster connection is available.

It’s not new that speed is dependent on signal conditions. It’s what modems used to do when connected over a phone line.

When a dial-up connection was initiated, the modems at either end ran through a series of tests to determine the quality of the phone line — the quality of the audio signal. They would then select a protocol and speed at which to run.

Audio modems were often advertised as being capable of 56Kbps (56,000 bits per second), but rarely ran at that rate. More common were the fall-back speeds of 22Kbps or 33Kbps — if you were lucky. To get the maximum speed, you needed to be living next to the telephone company’s equipment.

The same is true for Wi-Fi. Theoretical maximums can be achieved, but only by placing the two endpoints very close to one another.

The way I see it, that kinda defeats the purpose of Wi-Fi.

If speed matters, such as in gaming or large file transfers, choose a wired connection if you can. Review all the equipment in the path — your computer’s network interface, your router, and any intermediary equipment — to make sure it’s all capable of the speed you’re looking for.

If you can’t go wired or choose not to, make sure the Wi-Fi equipment you have is capable of the speeds you’re expecting, and do everything you can to make sure those devices get as strong and as clear a signal as possible. 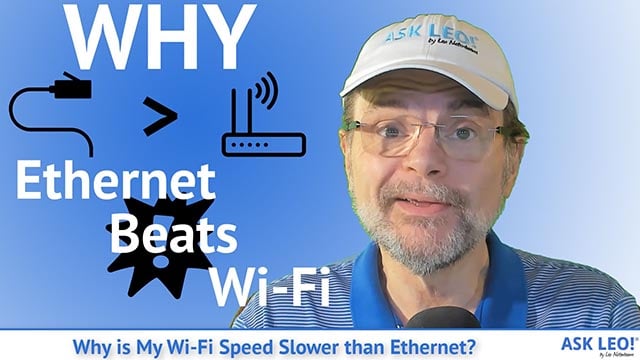 8 comments on “Why is My Wi-Fi Speed Slower than Ethernet?”