Why does my network connection drop every so often?

There are many possible reasons so I’ll focus a common one: confused network auto-speed detection. Most contemporary network cards, hubs, and routers attempt to automatically determine the speed of each network connection. Sometimes they get it wrong.

Most home and office networks run at either 10 or 100 megabits per second (mbs). Just how the network devices tell the difference varies from one device to the next. Most will also monitor the speed continuously just in case it changes. That means that if the device is going to make a mistake it could happen at any time. And that can look like anything from really poor network performance to a previously working network connection suddenly dropping.

The most common auto-detect confusion happens when the devices at both ends of a network connection are trying to auto-detect at the same time. The detection mechanisms can actually conflict with each other and cause one side to get it wrong. It’s not as common but the detection algorithm can also be affected by the actual data going across the wire, or electrical noise.

In most cases, especially on a small business or home network, you know what your network speed is and the autodetect functionality is unnecessary. It’s typically easy to turn off auto-speed detection on your network card and that’s often a good step to take when analyzing network problems.

Let Me Show You… 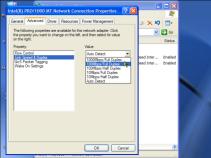 Click the image above for a short video showing how to turn off network auto-speed detection. (Windows Media 9 format, 379,388 bytes.)

I’d Like Your Comments:
let me know if you find the video above useful, or if you have suggestions to make this technique more helpful. Thanks!

You’ll first need to know what speed the connection should be at. That’s usually the fastest speed supported by your computer and the device at the other end of the network cable it’s plugged into. If your computer is connected to a router that router’s documentation should tell you. If you’re connected directly to a DSL modem the speed is typically 10mbs. If you’re not sure, select 10mbs as most faster devices are also auto-detecting and will match your selection.

The specific settings for auto-detection will vary slightly based on the manufacturer of your network card. Fortunately the location of those settings is consistent and the terminology used is fairly common.

To turn off network speed auto-detection:

This is where things vary based on your network card. In the left-hand list will be a series of properties that can be adjusted. Look for a setting similar to “Speed”, or “Link”, or perhaps “Media Type”. Click on that, and the right-hand “Value” dropdown list will probably have something similar to “Auto”. If you click on that drop-down list and options include entries that look like “10mbs”, “100mbs”, and so on, you’ve found the right item. Change the setting from auto by clicking on the specific speed you’ve determined you want the network card to run at, and press OK (If the setting also includes a full/half duplex selection, full is normally correct.)

Windows XP will apply your setting change immediately. Other versions of Windows may require that you reboot for the change to take effect.

68 comments on “Why Does My Network Connection Drop Every so Often?”