If they can, there’s something wrong.

It's for your own protection, and the result of fascinating mathematical wizardry. And if they can tell you your password? They're doing security wrong.
Why can’t an online service like Gmail or Hotmail or any of the others just tell me what my password is rather than forcing me to reset it all the time? I mean, they have to know what it is anyway so that they can check that I’ve entered it correctly. Right?

Believe it or not, most online services don’t know your password. Honest.

If they can tell you your password, that’s a really, really bad thing. It calls into question their understanding of all aspects of security.

Online services don’t know your password. Instead, they use mathematical calculations called hashes to confirm the string you typed today is the same as the string you typed when you set your password. Your actual password should not be kept or stored, and services should not be able to tell you what it is. This prevents breaches from exposing actual passwords. No matter what security measures your online services use, you still need to set long, unique passwords to remain safe.

First, let’s look at why services don’t need to know your password.

There’s a mathematical concept called a one-way hash. A “hashing algorithm”, which is simply a series of mathematical calculations, transforms a string of characters (like a password) into a very large number — a “hash”. An appropriate hash algorithm has some important properties.

It all sounds magical, and in many ways, it feels so. Hashes are a fundamental component of cryptography.

To be clear, this isn’t a simple formula. It’s complex, and can really only be done by a computer. But it works.

Done correctly, an online service handles passwords like this:

So the service only saves the hash. It never needs to keep your actual password.

I’m sure you’ve heard of various database breaches in the news. A hacker breaks into the servers of some service and steals their database of user accounts. If the database contains only properly-created hash values, the hacker can’t get your password. There’s no way to turn that hash value back into the string that created it: your password.

If, on the other hand, the database contains actual passwords, the hackers will have complete access to all of the accounts, including yours.

So if you encounter a service able to tell you what your password is, they’re not doing security right. And I’d be very wary of what other kinds of security-related things they might also not be doing right.

Properly implemented hashes are fundamental to good security. But that doesn’t mean you can let your guard down. There are potential weaknesses — not in design, but in implementation — of password storage schemes. They’re all thwarted by actions you can take.

First, if a standard hashing algorithm is used, it’s the same algorithm everywhere. For example, the bcrypt algorithm (a currently-recommended algorithm) returns this for the password “password”:

Your solution: make a long password that’s unique. The best would be some number of random characters. Creating a rainbow table of all possible 16 character passwords, for example, isn’t feasible. As long as your password is long and unique, you aren’t vulnerable to this possibility.

Your solution: use a different password (again, long and unique) everywhere. That way, no matter what gets exposed at any service, none of your other accounts are put at risk.

The best way to keep track of all those long, unique, random-character passwords is using a password vault. They are safe and highly recommended by security experts and random tech-advice writers like me. Here’s why. 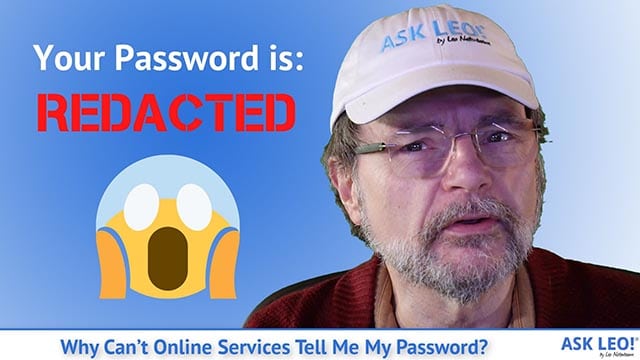 1: While displayed and stored as a string, technically, it’s still just a very large number.

2: Good security practices by the service would modify your password with something called “salt”. This is something added to the password, unique to the service, to prevent this situation. But not using salt is still common.

36 comments on “Why Can’t Online Services Tell Me My Password?”