It’s what you back up when you don’t know what to back up.

Backup terminology can be confusing. I'll define one of the terms I use frequently and explain why I think it's so important.

One of the obstacles to backing up is the terminology. Backup tools often use unfamiliar words, assuming you know what they mean.

Let’s define the most important one: the image backup.

An image backup contains all the data on a disk. (A clone includes the unused space as well.) Images can be made of partitions or entire hard disks. By backing up entire hard disk images, you’re guaranteed not to overlook something important.

[An] image is everything

An image is a copy of all the data on your hard disk.

This includes boot information, the operating system (Windows), the installed applications, the settings and configuration changes you’ve made, and, of course, all of your data. As I said, everything.

You can create image backups using Windows’s built-in tool, or third-party tools like Macrium Reflect, EaseUS Todo, or others. They carefully copy everything to a location you’ve specified. Most save the image as a single file, but some may use a folder of files. Image backups can generally only be read by the tools that create them.1

A backup image’s goal is simple: to be able to be copied back to a hard drive — perhaps a repaired or replacement drive — and restore everything to the state it was in when the backup was created.

The terms image and clone are often used interchangeably, and their definitions often reversed.

As I use it,2 an image of a disk contains all the data on the disk. If your 1 terabyte drive has 100 megabytes of data, an image would contain 100 megabytes (before any compression).

A clone of a disk also contains whatever’s in the “unused” space. Thus a backup of a 1 terabyte drive would be about 1 terabyte, regardless of how much data was on the drive.

For backing up, we only care about the data, so an image is our focus.

If, for some reason, the physical layout of the data and free space were important — perhaps in data recovery or forensic situations — then a clone might be better.

Not all images are the same

Unfortunately, an image of a disk can be one of two separate things: an entire hard drive, or a single partition.

Put as confusingly as possible, a disk can have more than one disk on it.

More accurately, a single physical hard drive or disk can be organized into what looks like several disks, called logical disks or partitions. In the example above, the single 100GB hard disk is divided into three partitions:

When creating a backup image, you’ll usually be offered a choice. For example, here’s what Macrium Reflect displays when choosing what to back up.

An image backup resulting from the choices could be:

They each have their uses.

When I discuss image backups unless I say otherwise I’m talking about the first: an image of the entire physical hard drive and everything on it.

Why an image instead of other approaches?

There are many choices when backing up. For example, you could choose to back up only your data files, or only data files you consider important. Many tools will do this to your specification, including some tools that also create image backups.

In my opinion, image backups are by far the most useful and the safest, because there’s no worry you’ve missed something. An image backup is a safety net without holes — it catches everything.

Anything less — commonly called a files-and-folders backup — means you’re making choices about what to back up. You could choose wrong and not back up something important. Worse, you usually don’t find out until it’s too late.

Your safety net is then more like a sieve and might let some things fall through the net.

Files-and-folders backups have their place. In some ways, for example, you can consider OneDrive and Dropbox as performing that kind of backup.

I rely specifically on image backups because there’s never a question. If it was on the disk at the time of the backup, it’s in the image.

While they’re the most important first step, there’s more to backing up than creating images. There are dozens of articles on backups, testing images, restoring from images, and more. A search is the best way to start. 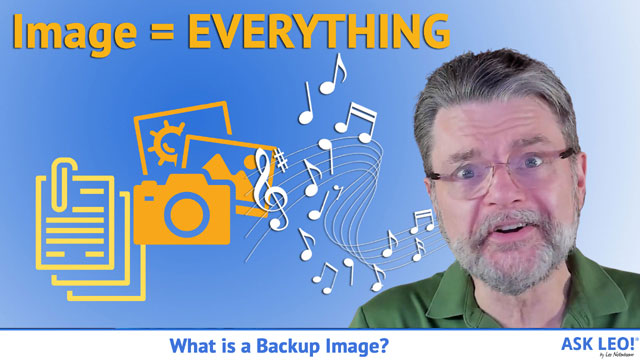 1: There are sometimes virtual disk image formats, like VHD, that are semi-standard, and a few of the backup programs may be able to read or write them.

2: Which then, by definition, makes it the right usage.

To be fair, I honestly believe my interpretation is the most common.

3: Yes, in theory, you might check some but not all of the individual partition checkboxes such that the backup might contain the images of multiple partitions. Not only does that add even more confusion, it’s also rarely used that way.

12 comments on “What is an Image Backup?”