Different definitions of “everything”.

The difference between a clone and an image boils down to what they contain: everything, or absolutely everything.
I always seem to become confused when the discussion turns to image and clone. I thought I understand the basic difference, but … maybe not?

One reason is a deep, dark, dirty little secret of the industry: we don’t all agree on what these two terms mean. Quite literally, one person’s clone is another person’s image, and vice versa. If you’re hearing different things from different people, that’s probably why.

I’ll share what I believe are the most accurate and common definitions. Hopefully, that means you’re more likely to hear more people agree with me than disagree.

A clone contains every bit of information on a disk, including whatever’s in the unused areas, and preserves the physical layout. An image contains only what we care about: the overhead information used by the operating system and all of our data. When it comes to routine backups, an image is generally what you want.

A clone is an identical copy of a disk.1

To understand this, we need to review what’s on your computer’s disk. Content falls into three broad categories:

Data isn’t necessarily kept together on a hard drive. As you create and use it, data gets spread out over the disk. When you delete a file, the area it occupied is marked as available (or free, or empty). Over time, portions (or “fragments”) of files are spread out over the entire hard disk, with free space in between.

A clone is an exact duplicate of the original. Not only is all the overhead and data copied, but the free space is also copied. This preserves the exact layout and organization of everything.

The most common application of cloning is to duplicate one drive to another identical drive. It might be for forensic recovery — perhaps information in the free space needs to be recovered — or simply a more complete ready-to-go backup.

It’s also possible to clone a disk to a file. That file can then be used to restore the disk to its original state, data, overhead, and free space included. A file containing a clone is proportional in size to the original hard disk size (ignoring any compression used when the file is created).

An image is a copy of all the information on a drive.

An image is typically written to a file rather than another drive, so it’s often called an image file. A complete image of a physical hard drive includes all the data plus the boot and partition information.

Since it doesn’t include any of the free space, an image is usually much smaller than the size of the drive you’re backing up. The size of an image is proportional to how much disk space is actually used.

To summarize: a full-image backup has two main differences from a clone:

An imaging or backup program usually copies one file at a time. It looks for a file on C:, copies it to the image file, and moves on to the next file. A side effect is that this process removes any fragmentation present on the original drive. In most image backup programs, when you restore an image back to an empty hard drive, the files come back perfectly defragmented.

Considering avoiding the topic completely? Read this first: Can I Simply Copy Everything on My Drive in Case Something Bad Happens?

Clone versus image: which do you want?

Now that we understand the difference, which should you use?

For backing up your computer and/or your data, you want an image. There’s no added value from taking the extra time, space, and resources to create a clone.

An image contains everything we care about: your data.

A clone contains absolutely everything, including stuff we don’t care about.

When in doubt, choose image. 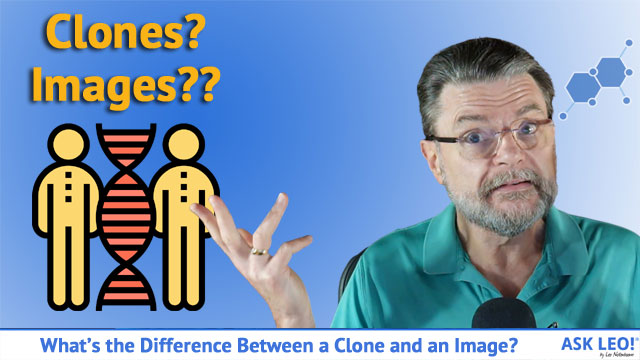 1: Disk here applies to either the entire physical disk (HDD or SSD), or a single partition on the disk.

57 comments on “What’s the Difference Between a Clone and an Image?”