There’s really no such thing as “too long”.

Backing up around major updates is a good idea, but can also be a side effect of a routine backup strategy. Then the question becomes: how long to keep 'em?
When I bought my Win 10 Pro Lenovo Desktop with 1 TB drive in 2015, I partitioned it into C:, F:, and G drives. I primarily reserved the C: drive for the OS and some mainline software, and used the F: and G: drives for data and third-party software. I have made full backups regularly. Over the course of time Win 10 has been upgraded 8-9 times. and I have saved the C: drive backups of the initial upgrade versions. I have about 3TB of backups on two external desktop drives.

First let me say: good job backing up! I wish more people took it even half as seriously as you do.

The question really boils down to how long to keep backups in general. It’s something I’ve discussed before, but saving the state of each major Windows 10 update adds an interesting wrinkle.

You outline your process as “.. saved the … backups of the initial upgrade versions.” I’m going to take to mean that shortly after a major upgrade — perhaps Windows 10 version 2004 upgrading to version 20H2 — you take a system image backup.

As I said, good job.

It’s not what I would do, though.

I recommend you backup prior to the upgrade, rather than after. You can do both, but before is more important.

If there’s a problem introduced by the upgrade, as has been known to happen, it’s the backup prior to the upgrade you’ll use to restore.

A backup after a successful upgrade is nice, but it doesn’t protect you from the upgrade itself.

For the first, you only need the backup image until you’re confident the upgrade is working to your satisfaction.

For the second, it depends. What’s the longest you can envision needing to go back in time to restore a file? There’s no answer, of course, so we make reasonable guesses.

And then save somewhat longer, in case our guess is wrong.

I don’t do additional backups prior to major updates. Since I back up daily, there’s always a backup the day prior to any update, small or large.

My approach, then, is to keep four kinds of full backups.

Monthly automated full image backups and daily automated incremental backups are my default suggestion. If you’re not sure, do that. If you know you need more, less, or different, then of course do what makes sense for you.

Keep at least two months’ worth of all backups. That way you can recover lost documents from any backup in that window, as well as recover from any update or hardware failure you encounter.

Keep more if you like. This depends on your own comfort level that you won’t wake up some months from now realizing you needed something from the backup you discarded yesterday.

With disk space as inexpensive as it continues to be, there’s little downside to keeping too many backups.

And there’s always a risk to keeping too few. 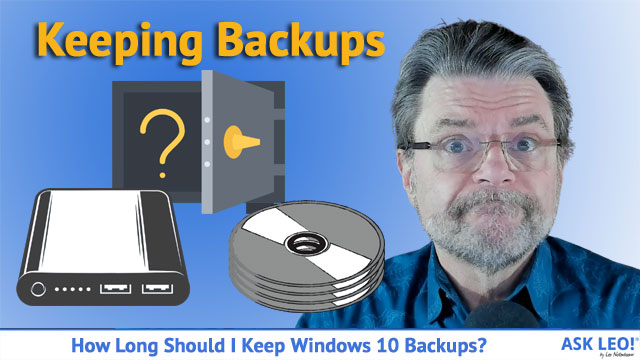 1: A full image once a month and incremental backups daily.

6 comments on “How Long Should I Keep Windows 10 Backups After Major Updates?”