Terms relating to backing up can be confusing. Understanding them helps you make better decisions about backing up.

I’ll describe each so we can compare them and see which is most appropriate for you.

Backing up your computer

The files on your computer, along with a little overhead information, represent everything stored on it.

This includes your data, the programs you run, the operating system, settings, temporary information, and much more.

It’s these files — your data, your programs, your everything else — that you can lose in an instant should you encounter a sudden hardware failure, malware, or another unexpected event.

Regardless of which approach you take, at its core, backing up is nothing more than making copies of those files and putting those copies somewhere else in a way they can be recovered should your originals be lost.

Before we look at which approach is appropriate for you, we need to define our terms: full, incremental, and differential.

I’ll start with the simplest: the full backup.

I love full backups. There’s no question about what is being backed up. It’s everything.

Let’s say you create a full backup of your computer on Sunday night.

On Monday, you take some pictures and upload them, you update your resume, and you work with a spreadsheet. On Monday night, you create another full backup. In this backup, you have Windows, all of your programs, and all of your files, including the new photo files and the changes you made to your resume and spreadsheet.

The result? A full backup image containing a copy of everything on the machine as it is on Monday night.

You can keep Sunday’s full backup if you like. It’s a copy of everything on of the machine as it was on Sunday night.

Now Tuesday comes along. Maybe you work on your resume some more and edit some of those photos you uploaded on Monday, and you start work on your friend’s resume. You’re doing nightly full backups, so Tuesday night, another full backup is created. It contains Windows, all the programs, and all your files, including the work you did on Tuesday, plus everything that changed on Monday, plus everything that was already there on Sunday.

Each is complete; each stands alone.

The size of these backups is proportional to the amount of information stored on your disk. They can get large, which means keeping a lot of them requires a lot of space.

Incremental backups are so called because they work in increments (“an increase or addition”, though here it also means “any change”).

Sunday night, the first backup is a backup of everything. In other words, it’s a full backup.

Monday night: since you’re creating incremental backups, you’ll back up only those things that have changed since the previous backup. (Remember, on Monday you worked on your resume, a spreadsheet, and uploaded some pictures.)

So, the first backup — a full backup — represents the machine on Sunday. The full backup plus that first incremental backup together represent the machine as it was Monday night. If your hard drive fails, you’ll need both backup files to put things right.

Now Tuesday rolls around. On Tuesday, you back up only things that have changed since the previous backup on Monday.

Now, to get a representation of the machine on Tuesday night, you’ll need:

In practice, you don’t keep taking incremental backups forever. Since each backup relies on the previous ones, if something happens to any of the previous backups, the chain is broken, and none of the following incrementals can be used. Every so often, you start over again with a full backup.

It’s important to understand incremental backups because I believe most people should use them.

In backing up, increment and difference technically mean the same thing (what’s changed), but in practice, they use different starting points.

Back to Sunday night: you begin with a full backup, a copy of everything on your machine.

Monday night, you back up those things that changed on Monday.

That sounds a lot like the first incremental, right? So far, it’s pretty much the same:

Tuesday is where it gets different. Tuesday, you changed your resume some more, edited those photos, and started your friend’s resume.

Differential backups contain the difference between today’s machine and the machine as it was as of the most recent full backup. In our example, that’s everything that changed on both Monday and Tuesday since Sunday’s full backup.

Tuesday’s differential backup does not know about, does not care about, and does not rely on Monday’s backup. Tuesday’s backup ignores Monday and builds only on the full backup you started with on Sunday. If you were to continue, Wednesday’s backup would ignore Tuesday and Monday’s backup, and back up all the differences between Wednesday night and Sunday’s start.

So, what do you want?

Now that we understand the terms, which do you want: full, incremental, or differential?

My recommendation is simple:

I also recommend you keep your backups for at least two months. This means keeping the entire set — full backup and incrementals — made during that month. After two month, you can delete them all.

Of course, if you have different needs, feel free to change it up. Add differentials, do full backups more or less frequently, and keep things longer. It’s up to you.

Full: this is easy: everything, every time, no questions.

Incremental: everything that changed since the previous backup.

Differential: everything that changed since the most recent full backup.

One way to remember:

These can be confusing concepts. You might want to also read “What’s an Incremental Backup?”, which presents some of this information with a slightly different approach. 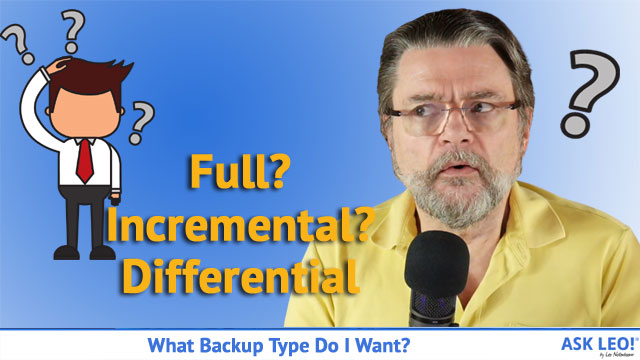 1: In a way it, too, can be viewed as an “incremental”. Nothing was backed up the prior day, so in a sense, everything changed and needed to be backed up.

41 comments on “What Backup Type Do I Want: Full, Incremental, or Differential?”