Boot differently, in all likelihood.

Recovery from an unbootable machine isn't as daunting as it sounds... with a little preparation.
I have a problem with my Dell laptop. When I switched it on, it started good, then a pop up of Dell Assist came on and said I need to update my system. It updated bios, hard drive …. then graphics card update failed and then it needed me to click restart. When it restarted, a black screen appeared and now it won’t reboot. What should I do?

While I don’t have a solution for this specific problem, I do have recommendations for what to do next and how to be prepared for this type of failure.

You can probably guess how I recommend you prepare, but there are several things to consider if you find yourself in this situation.

Depending on how your computer won’t boot, things to try include booting in Safe Mode, booting from a System Recovery Disk, booting from your backup program’s emergency disk, or reaching out to your computer manufacturer for more options. The best protection is your ability to restore a previous backup image if the problem is caused by a recent software update.

Dell provides a couple of diagnostic and updating utilities, and Support Assist is one of them. It typically comes pre-installed, though if you visit the self-service support site you’ll also be encouraged to download and install it if you don’t already have it.

I run it periodically on my Dell laptops to update drivers, as you did. In my opinion, it’s not only the official way to get driver updates, but next to Windows Update itself, it’s the only safe approach to getting driver updates2.

Other manufacturers may have similar updating and maintenance utilities.

One thing to try right away is to try to boot your computer into Safe Mode. Typically that means holding down F8 while your computer boots, though Windows 10 now uses a different approach.

Assuming you can get into Safe Mode, the first thing to try would be to attempt to restore to a restore point taken prior to the updates. The good news here is that many update utilities begin by creating a restore point, and even though I’m not  a fan, restore points can sometimes recover from these types of scenarios, if you attempt the recovery quickly enough.

Also, being able to boot into Safe Mode confirms that your computer’s hardware is unlikely to be at fault.

Booting from recovery media can allow you run additional diagnostic tools that may help. You can also boot from Windows setup media and choose “Repair” (instead of Install) to access these tools.

If Safe Mode didn’t work, you might also try “Startup Repair”, since that’s exactly where you’re having problems.

My next stop is the support site for the computer manufacturer. That can take either of two forms: direct technical support from the manufacturer, or “peer-to-peer” support from other users.

It depends on the manufacturer, of course, but for most major manufacturers, my experience is that more useful answers often come from other users. You’re likely to find others experiencing the same problem you are, and, if you’re lucky, how they fixed it. At a minimum, you’ll get some confirmation that you’re not alone in your experience.

The next step would be to restore the system to an image backup taken prior to the problem. This actually validates two things:

This presumes, of course, you have an image backup to revert to.

This is totally counter-intuitive, I get that, but if you don’t have a backup, you should attempt to make one now. In fact, there’s a strong argument that we should have started with this.

The problem is, as you point out, your machine won’t boot. The “trick”, if you want to call it that, is to boot from your backup software’s rescue media; most allow you to create a backup image of the system’s hard drive. If you don’t have the rescue media handy, you can create it on another machine.

The reason we make a backup at this strange point is simple: our data is only on an unbootable machine. There’s no guarantee we can fix the machine without drastic measures (like wiping the hard drive), so best to grab a copy of everything before we proceed.

Bonus: if the rescue media boots, we get the same confirmation as before: the hardware still works.

At this point, it may or may not be worth sniffing around for fixes for your particular problem. You may find some instructions somewhere that will help: perhaps a file replacement in Safe Mode, or booting into some kind of Linux Live Distribution will let you manually repair things, assuming you can find trustworthy instructions.

I’ve seen a lot of people waste a lot of time on this path.

It’s up to you, but if I’ve reached this point, I’m much more likely to reinstall Windows from scratch. Even though it sounds daunting, it’s often less work in total than continuing to look for and not find a specific solution.

If everything still fails at this point, it’s probably time to take the machine to a technician for more hands-on diagnosis.

Look, stuff happens. It just does. Be it an update failure, as you’ve experienced, or a sudden, catastrophic hardware failure, or something else entirely, things go wrong. When things go wrong, the failure, or recovery and repair procedures, can result in the loss of whatever is stored on that device.

As you’ve seen above, as long as the hardware is still working — as I suspect it is in your case — restoring an image backup taken prior to the failure allows you to sidestep the issue quickly and relatively painlessly.

If, as I said, you have that backup.

Have the backup. Prepare for failure. It’ll save your bacon some day. 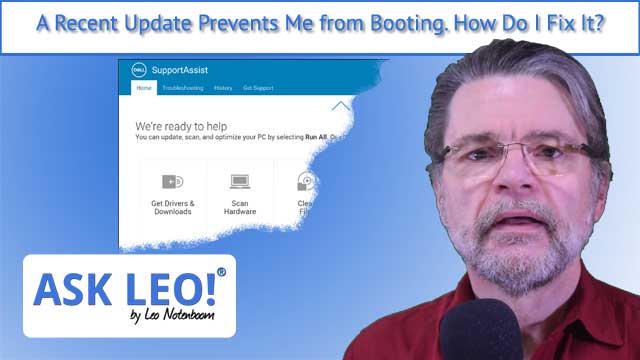 1: As you can see, my “service plan” for this particular device has expired. That’s OK, and I don’t need to renew. The utility will continue to work properly; in particular, driver updates are still available.

2: Dell also provides other update utilities and direct downloads. The key is the updates come from either Microsoft or Dell and nowhere else.

3 comments on “A Recent Update Prevents Me from Booting. How Do I Fix It?”