It held so much promise.

System Restore doesn't restore your system and has proven itself too unreliable to count on.

When I go into the System Restore application, it doesn’t give me the option to create a restore point; it only allows me to restore to an earlier point and it never creates restore points. Any ideas on what might be wrong or how to fix it?

I’ll be honest: I have no answer to your question.

There are many possibilities, the most likely being there is not enough disk space allocated for restore points. In my experience, increasing that may or may not resolve the issue.

System Restore is so difficult to diagnose, and I hear of so many problems and misunderstandings with it, that I now avoid it completely. I turn it off. It’s not worth it.

I’ll tell you what I do instead.

System Restore does not restore your system. Its name implies that it does, but at best it backs up and restores only the registry and few other items. In addition, experience shows it’s unreliable and untrustworthy. While System Restore can be a quick shortcut when it works, there’s simply no assurance it will. It’s much safer to rely on regular system image backups instead.

What System Restore is

System Restore is best thought of as a registry backup, and nothing more.

In reality, it backs up more than the registry, but exactly what else is complicated, and more importantly, incomplete.

As a registry backup, it’s reasonable. When it works, it’s a fine way to take a snapshot of the registry that you can restore later, should something go wrong.

But only the registry.

What System Restore is not

Ironically, “System Restore” does not restore your system.

More specifically, it does not restore everything to the state it was at the time the restore point was created. It restores some things — like the registry — but not all things — like your files or whatever else you were hoping it would.

System Restore is not a substitute for backing up your system.

System Restore in the wild

Much of my opinion on System Restore is not based on its definition or even its intent.

In theory, it’s a great concept, though poorly named. I’m not a fan of its user interface, but that seems to be improving and doesn’t really factor much into my opinion.

What does factor into my opinion is that in the real world, System Restore continues to have problems.

Your inability to manually create a restore point is just one example among many. Other common examples include failures when restoring and missing or non-existent restore points.

But often — too often — even understanding what should and should not be appropriate to expect, System Restore just lets people down

To be completely fair, I do hear of successes. It’s not uncommon to hear of problems caused by installing some application or another to be completely repaired by reverting to a recent restore point.

But in my experience, you just can’t count on it.

Leave it enabled if you like, but don’t count on it being there when you need it. Don’t set things up such that a System Restore failure would cause you grief.

Be happy when it works; be prepared when it doesn’t.

Backing up? Here’s a start: How To Back Up Windows 10.

Instead of System Restore

What I generally advise is to turn off System Restore completely (to free up the disk space allocated to it), and rely instead on a good system backup strategy.

If something goes wrong, restore from the most recent backup. Done. Everything — everything — will be restored to the state it was in when the backup was taken.

Yes, this can take more time than restoring to a System Restore restore point. Restoring from an image backup restores your entire system. But it’s worth it because it works.

Choosing to leave System Restore enabled is a fine approach, but only in addition to having those backups. That way, when System Restore works for you, it’s a shortcut — a time saver.

And when it fails, it’s not a disaster.

Is System Restore bad for your computer?

System Restore is not bad for your computer, but it could be bad for you. The problem is that it sets unrealistic and unrealized expectations for what it does and does not restore. On top of that, it’s also proven to be unreliable. The only real impact on your system is some amount of disk space for restore points, and perhaps a little time as restore points are created. The real impact to you, on the other hand, is the risk of being unable to recover from some issue you had hoped System Restore would resolve.

Can I interrupt System Restore?

You should not interrupt System Restore as it performs its restore. The reason is simple: it’s restoring often critical system files. Should that be interrupted you may be left with damaged files, or an incomplete restore, which could, at worst. render your system unbootable.

Can I get my files back after System Restore? 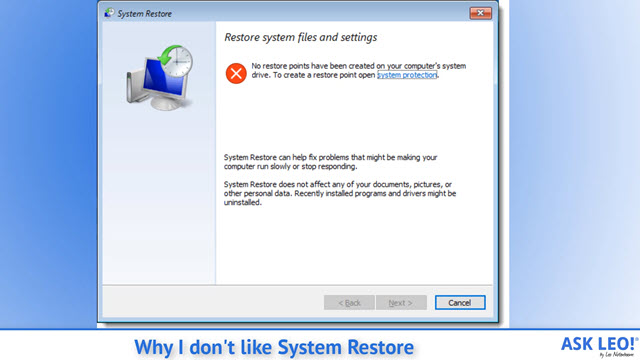