How do you remove software program completely and safely from the PC? Years ago I ran into issues using aftermarket software that was supposed to remove all the components of an unwanted software program. They did just that, but at the same time, I discovered the hard way that some software shares other components once they are installed.

This turns out to be a surprisingly difficult question to answer.

As you’ve discovered, software installation is not simple. That some programs share components with other programs is only the tip of the iceberg.

Perhaps the answer is easier than I thought: how can you completely uninstall a program? You can’t.

Let’s look at what you can do, though.

Let’s start by looking at all the different things that may get copied or created when you install software.

Worst of all, while there are guidelines, they’re not enforced. There’s really no standard that an application need adhere to.

Most programs provide an uninstaller, which is, of course, the first approach to … well … uninstalling.

Unfortunately, uninstallers aren’t a high priority to most application developers. Uninstallers are for people who want to stop using an application, so that’s no real priority here — don’t let the door hit you on the way out.

The net result is that uninstallers often don’t uninstall everything that was installed. They typically fall far short of a “complete” uninstall.

Even when they’re well written and thought out.

Did you want to save that?

One of the scenarios uninstall authors need worry about is this: an uninstall followed by an immediate reinstall.

This is a common debugging technique when we’re fighting a misbehaving application. I often advise people to completely uninstall an application and then reinstall it again from scratch.

The scenario, though, leaves us with a dilemma: whether configurations, modifications, and settings should be preserved. In other words, when you reinstall that application, should all of your configuration changes have been lost?

There’s no right answer. It depends. On rare occasions, an uninstaller will even ask if you want to preserve things — but most do not. Most often, an uninstaller removes the program but leaves behind those customizations, settings, and who knows what else, just in case you reinstall and want all that preserved.

Once again, a “complete” uninstall is uncommon.

Will the last person leaving please turn out the lights?

Shared components present yet another level of complexity.

Uninstalling Program A should not uninstall Library Z, even though it installed it. Doing so would break Program B. (Apparently you experienced this at some point.)

In an ideal world, it’s only when Program B is also uninstalled that Library Z could be safely uninstalled — as long as no other program had been installed also using Library Z. Here’s the problem: there’s really no recordkeeping of who might still be relying on Library Z, and to the extent there is, it’s unreliable.

The result is that Library Z is never uninstalled, even if no application is left to use it. (To be very clear, this is an extreme over-simplification of what actually happens. Interdependencies like this can become frighteningly complex, and most uninstallers don’t want to take the risk of being blamed for breaking another program if it made the decision wrong.)

Applications like Revo Uninstaller (and several others) take an interesting approach to uninstalling applications. By using them to initiate the uninstall, rather than the traditional method, the process to uninstall Program A looks more like this (using Revo as an example):

That last point is why dedicated uninstall applications often allow you to set a level of “aggressiveness” for their scans for leftovers. Set low, only safe things are removed. Set more aggressively, the program is allowed to remove things that might be slightly risky.

As I said, there are no standards that are universally followed. Revo can only hunt and make educated guesses based on what it finds.

Even then, it may leave things behind. It’s still not a “complete” uninstall.

The only way to really, truly, completely uninstall an application is to reinstall Windows from scratch. By erasing the hard disk as part of that operation, you are guaranteed that all traces of the application are gone.

Fortunately, it’s extremely rare that you need go to such lengths. Even if there are leftovers, a normal uninstall — even using the application’s own uninstaller — is typically sufficient.

And a lot less work. 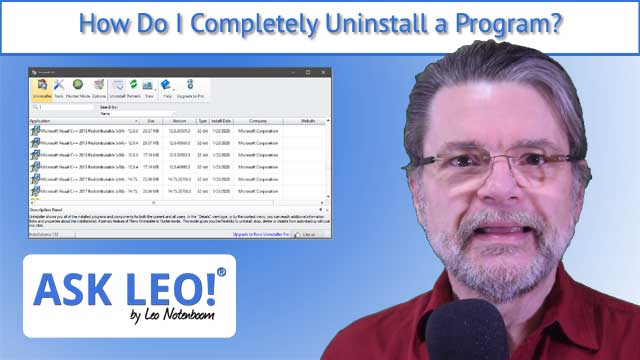 4 comments on “How Do I Completely Uninstall a Program?”