In a previous article, I went through the steps and decisions I made as I designed my new desktop system.

Today, I’ll introduce you to the manufacturer and walk you through my initial setup.

I purchased my new system from a local (30 miles from me), yet nationally known1, computer manufacturer: Puget Systems. Rather than having the machine shipped, I elected to drive down to pick it up.

I asked if I could take a few pictures for you (click any for a larger image).

While it may seem small — and they are smaller than the HPs and Dells of the world — they push out a large number of high-quality machines every year.

It was interesting to see my system’s birthplace.

My system configuration is public — you can click here and see it for yourself on the Puget Systems site. Throughout the order and assembly process, my customer portal on their website was kept up to date with a stream of status updates and information about the build, culminating in photos of the machine and the “It’s ready, come get it!” update.

The final accumulation of information includes thermal images of the machine running with and without load, screenshots of all BIOS settings, and a set of as-built benchmarks showing the machine’s capabilities.

The interior of the final product:

So, I brought it home, attached everything that needed attaching, turned it on and …

It was time for me to go to work.

What follows is a short summary of the steps I took, the software I installed, and a few of the tweaks I made in the first couple of days of using the machine.

After my break, I continued by installing:

Whew! And that’s not really everything, since I’m sure I missed the occasional configuration tweak here or there.

Why should you care?

This entire exercise is kind of a “behind the scenes” peek at what my life is like. As I’ve said before, your needs are almost certainly different than my own. (For a more pragmatic — and shorter — list of what to do first, The First Eight Things to Do with Your New Computer is a great place to start.)

So, in part, this is entertainment — a look behind the curtains, as it were.

But it’s also an example I hope you can at least follow in spirit of some very important themes when getting a new machine: 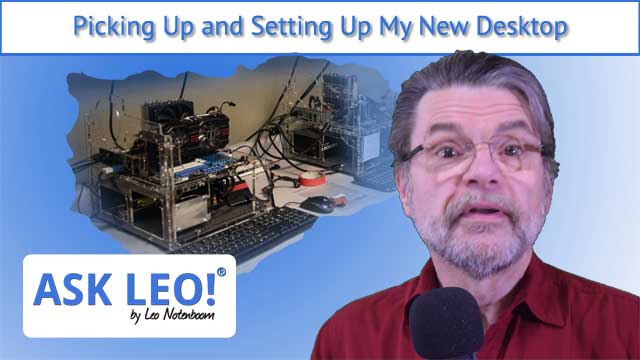 1: If you’ve ever heard of or seen the YouTube channel Smarter Every Day, Dustin also got a new machine from Puget Systems about a year ago, and videoed the experience.

PS: Puget Systems, as best I can tell, has no affiliate program. I get no money from them for talking nicely about their product. They just do good work.

25 comments on “Picking Up and Setting Up My New Desktop”