A MAC address can easily be traced for as far as it travels -- which isn't far enough to be useful.
I know that all computers have a unique MAC address. But how traceable are they? If my laptop gets stolen, and I know my MAC address, can I get back to it if the person stole it gets connected to the internet, even after formatting the machine and thinking that it’s safe to connect? Seems like this could stop laptop burglaries if that MAC address thing is traceable.

You’re correct . . . it could put a big dent in laptop burglaries if MAC addresses were truly traceable. It would at least increase the odds of stolen equipment being recovered.

But they’re not traceable . . . at least not in any way that could help.

Let’s look at why.

MAC addresses are unique identifiers for each network interface on your device. While they do identify the device, when used in networking they travel only as far as the next device, like your router. That limits the usefulness of MAC addresses for any kind of device location or tracing.

MAC addresses are unique — sort of

A Media Access Control (or MAC1) address is a unique 48-bit number2 assigned to every network interface. If your computer has multiple network interfaces — say both a wired ethernet port and a wireless network adapter — each interface will have its own MAC address.

There are three problems:

So the uniqueness on which we might want to rely is not 100% reliable.

But that isn’t really the biggest problem.

MAC addresses travel only so far

The MAC address is used by the network to identify which piece of hardware a packet of information is to be sent to. While the IP addresses involved indicate the original source3 and ultimate destination, a MAC address is used only on connections from one piece of networking equipment to the next.

When it comes to data traveling over the network, your MAC address never makes it further than the first piece of networking equipment between you and the internet.

MAC addresses, however, have been used for other things.

For example, since MAC addresses are theoretically unique, a MAC address could be used as a unique identifier for tracking the actions being taken by or on a specific computer. (I’m not aware of specific situations where this is done — I suspect other unique identifiers are easier to use — but it also wouldn’t surprise me if a MAC address were used in this way somewhere.)

The MAC addresses of the network adapters on your computer are easily readable by software, and could be used for just about anything . . . except tracking your stolen laptop via its network connection.

How do I identify a device by its MAC address online?

You cannot identify a specific device by its MAC address online. The MAC address doesn’t travel far enough to be useful for location information, and there’s no central database of which MAC address is assigned to what device.

How do I check a MAC address vendor?

There are online services such as macaddress.io that will, given a MAC address, attempt to look up the manufacturer of the interface that it corresponds to. In practice, not all vendors can be found this way, as apparently not all are properly registered in the databases used for this purpose, but it can be a useful tool.

Is there a MAC-address-to-IP-address converter?

There is no MAC-address-to-IP-address converter. Data originating from a specific MAC address will travel over several different devices, each with its own different MAC address. While the originating device might be considered to be “at” a specific MAC address, the information is not made available beyond that device’s local network. Other intervening devices, like routers, could corresponding to any number of different IP addresses, depending on the data flowing across them. 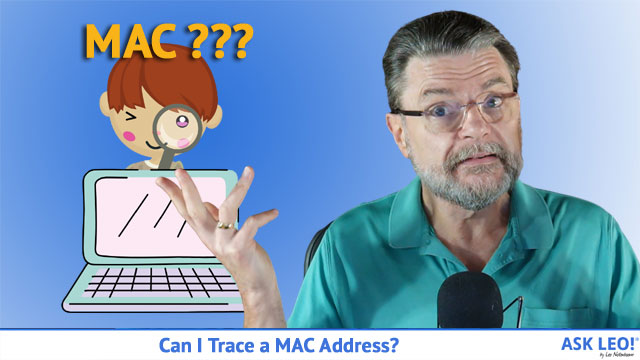 1: Completely unrelated to Apple –except that like all computers, your Mac’s network adapter has a MAC address. But it’s unrelated to it being a Mac from Apple.

3: The original source at that time. IP addresses are typically dynamic and often change.