Hard disks can last a long time, but it's important to realize that they could still fail at any moment.
You had an article about the life of SSD drives. Now, I have a 15-year-old PC with an ordinary hard drive and it is still working fine. How long do drives like that usually last? This is oldtimerstuff.

Talking about the lifespan of SSDs (Solid State Drives, a new technology) does beg the question: what about hard disk drives, or HDDs?

There’s a reason we focus on SSD lifespan more than we do HDDs, and it’s a good one.

But first, we need to begin with the (hopefully) obvious.

Traditional spinning magnetic-platter hard drives can last for many years, as reported in data center studies. While failure rates do increase over time, they remain relatively low during the useful life of the computer containing the drive. Regardless of the expected lifespan, it’s critical to assume it’ll fail at any time and be prepared with backups, so as not to lose any data.

Anything can die at any time

Remember that your old hard drive could die tomorrow, so make sure you’re backing up.

That’s not a value judgment on the drive, its age, or even how you’re using it. Hardware can die suddenly, completely, and without warning at any time.

That’s true for SSDs as well as HDDs, and true for the newest of the new and the oldest of the old.

Even a “guarantee”, if a drive comes with one, doesn’t mean it won’t die unexpectedly. All it means is you might get your money back. You won’t get your data back, though, unless you’re backing up.

With that out of the way, we can move on to the meat of the question.

One of the industry benchmarks is the BackBlaze Hard Disk Reliability Report. Here’s a recent one. They report quarterly on the failure rates they see in their data center, right down to the specific drive and model, over the lifespan of the drives. They’ve been reporting since 2014 and have a nice collection of data to generalize from.

The comparison is slightly off-target for consumer drives, as they’re specifically looking at the drives in their data center. Unlike most consumer computers, these are likely to be higher quality drives that are in use 24 hours a day, seven days a week.

But I think the patterns, if not the specific numbers, are still valuable to look at.

The short answer appears to be: A Really Long Time.

Looking at the trend line, there’s an initial bump of drives that fail within the first year, often referred to as “infant mortality”. Clearly, having worked for 15 years, your drive is well past this stage.

After that, drive failures seem to accumulate at a rate roughly (very roughly — remember, I’m over-generalizing here) at a percentage rate proportional to their age in years. Put another way, from their graph it appears that 4% of all four-year-old drives will fail, 5% of all five-year-olds, and 6% of all six-year-olds, etc.

If we apply this data-center data to your 15-year-old consumer-level drive and extrapolate, it implies you’re looking at around a 15% chance of failure. Put another way, an 85% chance it’ll just keep chugging along.

So much so that I believe they tend to last longer than the useful life of the machine they’re a part of. The result is, most machines are decommissioned due to old age or other hardware failures with hard drives that are still functional.

Functional, perhaps, but due to the fact that hard drives are also getting larger and larger, those old still-working hard drives are often discarded for another reason: they’re just not big enough anymore.

The reason lifespan is an important talking point for SSDs is that flash memory has a specific lifespan.

It’s gotten better — much better, even — but it does wear out over time. And even though they’ve been around for a while, we don’t yet have the same track record to evaluate SSDs that we do for HDDs. BackBlaze, for example, only has a couple of years of data on SSDs, as they’ve slowly been making their way into the data center.

Traditional spinning magnetic-disk hard drives don’t “wear out” in the same way. They tend to die for other random reasons at other random times.

The only life expectancy you should consider

Sure, consider life expectancy when you purchase a machine or a hard drive or SSD. Stack the deck in favor of it lasting a long time.

Then, after you put it into service, expect it to die tomorrow.

In other words, keep backing up.

Which lasts longer, SSD or HDD?

It’s too soon to say which lasts longer in normal use, an SSD or an HDD. The thinking is that the HDD will last longer because it doesn’t “wear out” the same way an SSD does. The good news here is that the lifespans of both have increased to the point of the difference being relatively unimportant: either will typically outlast the useful life of the machine in which they’re used.

When should I replace my hard drive?

You should replace a hard drive when it shows signs of failure. That can be a sudden, catastrophic failure, or an increasing number of bad sectors, perhaps as reported by CHKDSK /R. System issues might also point to possible failures, but disk-specific diagnosis should be the first line of attack. If a disk continues to work and work well, there’s no need to replace it unless you simply need more capacity. Regardless, assume that the disk will fail tomorrow, and back up religiously so as not to lose data if it does.

Will a hard drive last longer if not used?

There are conflicting opinions on whether or not a hard drive will last longer if unused. On one hand, when the drive is not in use, the moving parts in an HDD might become stuck in their last position. On the other hand, while in use, those moving parts are moving, possibly causing wear on the bearings and elsewhere. There’s no clear indicator as to which is more likely to happen.

How long does an external hard drive last? 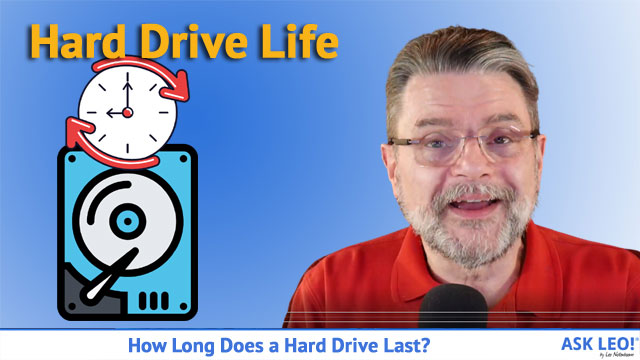 6 comments on “How Long Does a Hard Drive Last?”