It's common to ask "Why?" when it comes to computers. It's also common to be frustrated with the answer.

I was helping a friend the other day with some Windows issues and a not-uncommon question came up, one that I often dread.

It’s a common question that gets applied to computers and software of all generations and iterations. Recent versions of Windows have certainly generated a healthy share of “Why?” questions — but trust me, it’s nothing new at all.

The problem is, asking “Why?” is more often than not an exercise in futility.

It’s rarely fruitful to ask “why” something is the way it is. The answer, if it even exists, will rarely help and often frustrate. Since the question is usually asked out of frustration, it’s best to understand that regardless of why it is what it is, it is what it is. Best to deal with it and move on.

Don’t ask out of frustration

Faced with something they don’t understand, can’t comprehend, or just don’t like, many people ask “Why?” out of frustration.

Why were decisions made the way they were? What were they thinking? The questions may be mostly a way to emphasize just how much the questioner disagrees with those decisions. They’re not really looking for an answer.

That’s a good thing because most of the time, there is no answer. Expecting one — in particular, one that would allow you to reconcile whatever issue you’re facing and thus be OK with it — is just going to frustrate you when no answer is available.

Searching for a “Why?” out of frustration is energy wasted.

To get all Zen for a moment, it is what it is.

Getting frustrated, demanding to know why, or even understanding why isn’t going to change any of that. You don’t have to like it, but it’s probably best to simply accept whatever it is for what it is and make decisions accordingly.

When the why isn’t the real why

One of the most frustrating answers in technology when it comes to “Why?” is what I refer to as marketing-speak; you could even say misleading or misdirected marketing-speak, at that.

This happens when the source of our frustration believes we can’t handle the truth or simply doesn’t want to share the truth and gives us some corporate line about why a specific change was made.

A company might say they made a change because their tests revealed it was better, stronger, faster, or whatever, when in reality, the change was made to further some agenda. That agenda might be about selling more product (not something they want to admit publicly), unifying some underlying technology (rarely a selling point), or about laying a foundation for some future direction (that they can’t yet admit to for competitive reasons). Or it could be some other random reason.

Whatever the reason, it’s clear to those of us who use the resulting change that it’s anything but better, stronger, faster, or whatever.

Once again, the reason doesn’t matter. It is what it is. They did what they did for whatever reason they did it.

Live with it or seek out alternatives. In either case, move on.

Sometimes, you get lucky and actually find out why something is the way it is. And once you know why… you’re no better off.

“Why did they change the user interface?”

“So it would be consistent across all kinds of devices.”

“But I don’t use other devices. Besides, it doesn’t work on the device I do have.”

Do ask “Why?” out of curiosity

I don’t want to make it seem like you should never ask why. “Why?” is an important question when you’re curious. When you’re trying to learn how things work, the question “Why?” is often an important step to understanding something in order to make better use of it.

A genuine “Why?” often uncovers rationales that can help you make sense of how things are connected and how things relate.

When you ask “Why?” in an attempt to learn something, it may occasionally be out of momentary frustration, but you’re genuinely interested in the answer.

On the other hand, asking “Why?” out of pure frustration because you encounter something you don’t like is rarely an educational or helpful experience. 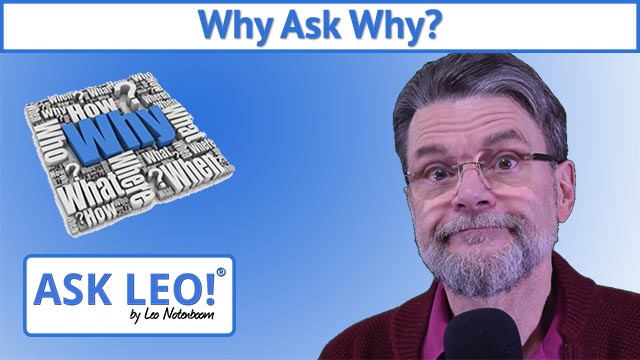